Chris Whipple is the author of the new book The Gatekeepers: How the White House Chiefs of Staff Define Every Presidency. He is a documentary filmmaker, journalist, and speaker, and has worked for CBS's 60 Minutes and ABC's Primetime. He was executive producer and writer of Showtime's The Spymasters.

Q: In your epilogue, written last December, you say, “For Trump’s chief, the job also carries a profound responsibility. He may well represent the thin line between the president and disaster.” How do you think Reince Priebus and General John Kelly have done so far?

A: That’s more true than ever. We’re now in the midst of a crisis with an unpredictable tyrant in North Korea and a guy who tweets irrationally and calls him Little Rocket Man and the stakes are really high. Kelly is the thin line between the president and disaster.

I think I said in the epilogue that Trump is likely to go through several chiefs of staff, and if Trump of all people does not empower the chief of staff as the first among equals, he would get nothing done.

That’s what happened in the first six months with Reince Priebus. He made rookie mistakes. He was out of his depth without White House experience. At the end of the day, the real failure was Donald Trump’s decision not to empower Priebus as first among equals. Priebus never had a real chance of executing Trump’s authority. You had all these competing rivals. It was the most dysfunctional White House in modern history, but it’s not fair to pin it all on Priebus.

With Kelly, there’s no question Kelly has done a better job of making the trains run on time in the West Wing. He managed to impose discipline. But that’s the easy part. The hard part is telling the president what he does not want to hear, and it’s not clear Kelly [has done that].

We learned a number of things about Kelly in a really inept performance [in his recent press briefing]. He really was out of his depth. 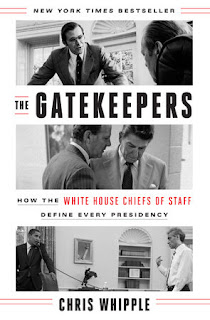 There have been really good White House chiefs. I suggest he call [former chief of staff] Leon Panetta. Other good ones, James Baker, Ken Duberstein, understood that when you go before television cameras, you’re not speaking as a Marine. You have to stay above the fray. You can’t do what Kelly did and go off on a tirade against an elected official without hurting your credibility, and that is the coin of the realm for a chief of staff.

The other thing that’s important and disillusioning—let’s assume Trump learned a lesson, that you have to empower a White House chief. He has not learned that governing is completely different from campaigning, [which involved] demonizing, dividing, disrupting. With governing, you have to compromise. Trump is inept and Kelly doesn’t seem to understand governing any better than Trump does. He’s doubling down on Trump’s worst [instincts].

Q: You describe Nixon’s chief of staff, H.R. Haldeman, as the “first truly modern White House chief of staff.” What was in place before that, and how did he define the role?

A: You can make the argument that the first modern chief of staff was Sherman Adams, under Eisenhower. He was a gatekeeper. He was called “the Abominable No-Man.” But I think Nixon and Haldeman looked at the Eisenhower model and decided to take it to another level.

Haldeman is credited with the modern template—a gatekeeper but also an honest broker of information, in charge of the information flow, the communications, making sure everybody is on the same page. There’s been no such thing as a Cabinet government since Nixon. Nixon emphasized that Haldeman would be the “son of a bitch” that everybody would answer to.

Haldeman created the template—you talk to [Dick] Cheney and others who were at a conference with Haldeman [years after he had left the White House] and they were all blown away by Haldeman. He understood how the White House should operate.

The great irony is that the guy who wrote the book on how to be chief went to prison. At the end of the day, he failed to speak hard truths to Nixon during the Watergate coverup, but that may have been Mission Impossible.

Q: You mentioned Panetta, Baker, and Duberstein—do you see any others as among the best chiefs of staff, and why?

A: Almost everybody would agree that James Baker was the gold standard. I would put Leon Panetta in the same league, and Duberstein was very effective. Erskine Bowles, Dick Cheney was a terrific chief of staff.

Baker and Panetta stand out. They could walk into the Oval, close the door, and tell the president what he didn’t want to hear. They were grounded. They were confident in their own skin. Temperament is sometimes underrated in White House chiefs of staff. Kelly showed [at the press conference] that he may not have the temperament.

In the case of both of those guys, neither Reagan nor Clinton would have had a second term without them.

Q: What about the worst?

A: Don Regan [in the Reagan administration] has always owned that. When [he and Baker] swapped jobs, it was the most disastrous job swap in political history. Regan was completely unsuited to be White House chief of staff. Baker used to say the most important word was “staff,” not “chief,” and Nancy said [Regan] liked the sound of “chief”—he was arrogant and entitled.

As Ken Duberstein put it, he thought Reagan was the retired chairman of the board and he was the CEO. It was a disaster. He didn’t notice that something was brewing in the White House basement—the Iran-contra affair. It never would have happened on Baker’s watch. Regan was not savvy enough to see it coming.

Peggy Noonan said of Baker that he’s a Texas lawyer, they don’t do bibles baked in cake. It gives you an idea of how consequential the job can be. Regan owns that.

Sam Skinner had a really rough run as George H.W. Bush’s chief, replacing Sununu. It’s too early to put Reince Priebus in his place historically, but he had a tough six months.

A: I’m working on a new chapter for this book, for the paperback, which will be out in April or mid-March. I’ve got to do a chapter on Trump and his chiefs.