Rhonda Lynn Rucker is the author, with her husband, James "Sparky" Rucker, of the new children's picture book Make a Change. She also has written Swing Low, Sweet Harriet. The Ruckers are musicians who focus on effecting change through music. They live in Maryville, Tennessee.

Q: You note that although Make a Change is fiction, it's based on your husband's experiences as a child. How did the two of you decide to write a picture book about the events of 1960 in Knoxville and the civil rights movement?

A: Sparky and I are professional musicians and storytellers, and I have heard him tell the story of his first civil rights demonstration to audiences for many years. It carried such a powerful message, I thought everyone should hear it.

Knoxville is Sparky's hometown, of course, so we have close ties there. For a few years during his childhood, Highlander Folk School (now Highlander Research and Education Center) was just a few blocks from his house. That's where he first heard Pete Seeger sing and where he later met people like Rosa Parks.

During marches and protests, Sparky began leading civil rights songs. Nowadays, we still include some of those in our performances. Music has always played a dominant role in movements for social change, and I tried to include that message in the book.

Q: What did you see as the right mixture of fiction and actual history?

A: I don't have a problem changing facts a little if there is a good reason. In the past, when Sparky told the story on stage, he had always assumed he was younger than he actually was.

When I looked up the protests of Rich's Department Store and other Knoxville businesses, we learned he had actually been 14 years old. However, that age wouldn't work well for a picture book, so I cut off a few years. 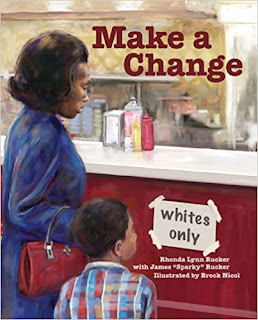 Otherwise, the first version of the book was very close to what actually happened. I gathered advice from my critique group as well as editors. As the story went through its many revisions, I tweaked a couple of things to make the plot stronger. As it is written, however, the book still carries the same basic message that Sparky took away from the experience.

Q: What do you think Brock Nicol's illustrations add to the story?

A: From the get-go, I was pleased with Brock Nicol's illustrations! His portrayal of the family and other characters make the book come alive. His realistic style and vivid colors are perfect and help a child envision the story.

A: The book addresses prejudice in an unexpected way, and I hope readers will understand the same powerful message that transformed my husband's life. It's a lesson that he has carried with him for over 50 years.

In addition, I would like children to see that they are never too young to make a difference in this world. If something is wrong, they can change it. 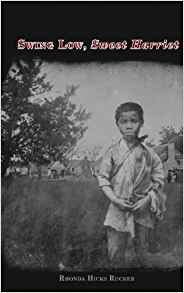 A: I am currently making finishing touches to a historical young adult novel based on the Birmingham's Children Crusade. Through that hard-fought campaign, teenagers did what adults had failed to do—transform public opinion and energize the civil rights movement.

A: Sparky and I often give performances in schools and libraries, where we can talk with the children about these issues, and get them to sing along on some of the old civil rights songs. For more information, visit our website.