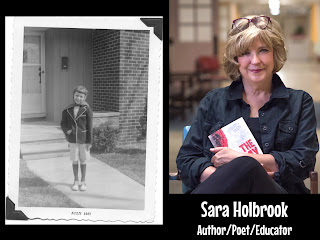 Sara Holbrook is the author of The Enemy, a new historical novel for older kids set in Detroit in 1954. Her many other books include Zombies! Evacuate the School! and Weird? (Me Too!) Let's Be Friends. She lives in Mentor, Ohio.

Q: You write that The Enemy was based in part on your own family stories. What blend of history and fiction did you feel worked best?

A: For me, the most important theme in the book is Marjorie finding the courage to speak/stand up for herself. This is resolved through a fictional plot, of course. But the surrounding times had to ring true, both to my memory and to research.

There were a couple scenes in the book that were family stories that I found telling people over and over, in particular about my father’s experiences in WWII and my experiences growing up with him. Some of those appear in the book. But alone, these would never be of reading interest to middle grade students. I also needed a strong plot line that brought in the elements of history, but would be compelling to kids. The relationship between the girls developed in the writing of the book.

Q: What kind of research did you need to do to recreate the events of 1954?

A: Well, if you live long enough, your life becomes history. My advice to everyone is: Take notes!  That said, I was only 5 in 1954, so my memory of the year wasn’t too reliable.

I do remember that many of my friends had parents with foreign accents and maybe a grandparent or two that didn’t speak English hardly at all. I remembered the air raid sirens and being barred from the adult section of the library.

Beyond that, I needed to fully research the McCarthy period, which books were banned, what TV shows were airing and when, and things like party line phones. I had never heard of the loyalty oaths that teachers, librarians and defense workers had to sign until I researched the topic.

It was through research that I dated the book in 1954: first the obvious parallel with 1984 and second, it was in June of that year when Welch finally took down McCarthy with his famous, “Have you no sense of decency,” accusation. The information about Army nurses and the temperature inside of tanks, those were all gleaned through research.

A: The last scene in the book, where the fathers meet, I knew that was where I was going. But the final resolution of the slam book and Marjorie’s next move, those evolved in the writing and editing process.

A: Wow! So many and for so many different reasons. Let me start with the four who were kind enough to give advance reviews on The Enemy. 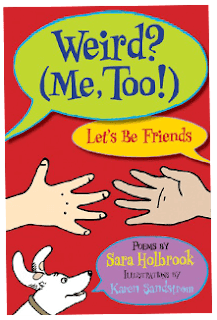 Jane Yolen for her storytelling, her astonishing work ethic and her generosity to growing writers. Sharon Draper for her ability to ready audiences through realistic fiction. Pam Ryan for her artistry and breadth of subject matter. Finally, Chris Crutcher for his ability to craft stories that draw the reader so far in, that you feel the protagonist’s internal conflicts.

The Al Capone books by Gennifer Choldenko gave me guidance on language choice and historical perspective. And of course Kathy Applegate. This is a long list.

A: I am working on a novel set in 2005, working title Borderline. In the book, the protagonist, Hannah, is teetering on the border between what’s real and what’s not in her parents’ post-divorce world.

She is sent from Ohio to live with her Gran who is an activist on the border between Mexico and the U.S. in Arizona. She comes to confront her own prejudices. Her Gran is Marjorie from The Enemy.

A: I am very grateful to my editor Carolyn Yoder who guided the book, to Calkins Creek for making the investment in my first novel, and finally for the positive reviews. I have enjoyed (almost) every moment of this entire process.