Alison Jarvis is the author of the new poetry collection Where Is North. Her work has appeared in a variety of publications, including Cream City Review and Gulf Coast. She is a psychotherapist, and she lives in Brooklyn.

Q: Over how long a period did you write the poems in this collection, and how did you decide on the order in which they would appear?

A: The poems were written over a very long time, probably about 18 years. My conscious intention wasn’t to write a memoir of loss, but I think in many ways that’s what this book is.

In my late 30s my husband was diagnosed with early onset Parkinson’s and so we lived with an undercurrent of fear and uncertainty about our future. His condition proceeded inexorably, and in the middle of my life (if I live to be 100!) I was entering a very dark wood. The poems in the collection are in one way or another a response to finding myself lost there.

The loss of a beloved arouses a state of grief in all of us, but of course, we each experience our grief in a particular way; the shape it takes, the way we enact it, has so much to do with our earlier lives and relationships. I note this because it plays a major role in how the poems are ordered.

I found ordering the book difficult. My first attempt was too chronological, thus linear. When I tried to achieve more dimension, the manuscript was all over the place. I just could not get outside of the poems enough to find the order I knew I needed. How lucky for me then, that I have a close friend -- a wonderful poet and editor -- who I could consult!

The poems move vastly back and forth in time and space. To help maintain coherence the book is divided into five named parts, ordered so each of the parts illuminates the others.

One poem – the longest in the book – contains themes, concepts and images that run throughout all the poems, and its timeline includes events from the late 19th century to the present.

This poem, "Dakota," helped reveal what the order should be. Placed in the middle of the book in its own section, it reflects elements of poems which come before it and leads into poems which follow it.

Our obsessions are everywhere in our work, and it amazes me that I didn't fully see how often the representations of mine showed up until I put poems side by side.


Some central images are birds, rivers, the sky, telephone wires, snow and cold. Concepts like rescue and salvation appear again and again. People are falling; people are holding on. They are fleeing. There is a recurring struggle to make the self truly known to the beloved. 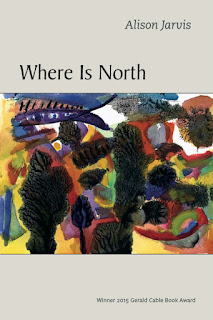 Ordering the poems to take best advantage of the repetition of these motifs helped achieve what I hope is an integrated collection.

Q: How was the book’s title chosen (also the title of one of the poems), and what does it signify for you?

A: The title poem was one of the very first poems I wrote included in this collection. It’s set in winter in Minnesota where I grew up. Although I left there after college, its landscape is an important part of me, geographically and emotionally.

North as an idea has a hold on me. The title of Canadian pianist Glenn Gould’s pioneering radio documentary, The Idea of North, struck me and resonated for years before I was even able to obtain a recording of it.

The title "Where Is North" signifies a search for a fixed point in a whirling world. If we can locate true north, we can navigate and find our way. Many of these poems were driven, I think, by a need to understand how the harsh emotional north of childhood might affect the search for a way out of the woods.

Q: You begin the book with a quote from Rolf Jacobsen. Why did you pick that and how does it fit with the themes of your poems?

A: The quote from the Norwegian poet Rolf Jacobsen I use as an epigraph came to me like a gift. It was sort of miraculous, really. I had completed the manuscript and spent an outrageous number of hours looking for a quote which could suggest the themes in the book in a beautiful way.

It wasn’t going well when I saw a mention somewhere of North in the World, a book of Jacobsen’s selected poems I wasn’t familiar with. I really admire Jacobsen’s work and having Norwegian heritage, I always felt a particular kinship with it.

I ordered the book immediately and when it arrived, I turned a few pages in the middle of the book in the elevator on the way up to my apartment. Almost immediately the lines from the poem “Slowly ¾ ¾” which I use in the epigraph leapt up at me.

The poems in this bilingual edition of the book are brilliantly translated by Roger Greenwald, himself a superb poet, and I found “Slowly ¾ ¾” breathtaking.

The lines I chose to introduce the book ask how we find a way to connect what’s scattered. A compass is mentioned, and the lines in girls’ hands like wind through roses. This… summoned up for me my three sisters who appear in a number of poems, and of course, myself.

And Jacobsen says it’s late, that soon the river will carry images, hillsides, reflections of houses, and a beloved face out to sea. In my book all of that happens.

Q: Are there any poets whose work you particularly admire?

A: I’ve been drawn to poetry since childhood and my taste is catholic so I can’t even imagine how long it would take me to list the poets whose work I love, admire, and go back to time and again.

My grandmother introduced me to Dickenson when I was 4 or 5 so she’s been with me the longest...if you don’t count the poetry of the King James Bible. T.S. Eliot and Wallace Stevens I started reading as a young teenager.

I had absolutely no idea what the poems were about. I just knew I loved what they sounded like, and how they made me feel. I still read them, and Frost and Yeats, too. I’m a fan of W.H. Auden. I concentrated on the Romantic poets in college – particularly Wordsworth – who, along with Keats, remains a favorite.

Denise Levertov, Adrienne Rich, and Muriel Rukeyser were my introduction to poetry by contemporary women. I still admire not only their work, but how involved they were in human rights. The poetry of Louise Glück, Sharon Olds, Jorie Graham, Donna Masini, Deborah Diggs and Lynda Hull, with their intimacy and intensity, inspired me from early on.

When I started to write poetry seriously, the voices I heard most often in my ear belonged to Larry Levis, Stanly Plumly, Eamon Greenan and Mark Strand. I continue to read their work often.

Right now there are so many amazing poets writing. I subscribe to a couple of sites which send a poem every day, and I am constantly discovering incredible work by poets new to me.

As I look around my apartment, I note these opened books on various surfaces: A Night in Brooklyn by Dennis Nurkse, whose every book I read; Tryst by Angie Estes; Ross Gay’s Catalog of Unabashed Gratitude; Waterborne by Linda Gregerson, Ocean Vuong’s Night Sky With Exit Wounds, and a triple treat, Stolen Air, poems by Osip Mandelstam, selected and stunningly translated by the poet, Christin Wiman, with an introductory essay (a poem in itself) by poet Ilya Kaminsky. My shelves are full of other books I’ll pull down in the next days and weeks.

Beyond the poets and books I mentioned, not only do I have deep admiration for the work of my friends in the poetry community, but I often have the privilege and advantage of an up-close look at how they make it happen.

A: I’m working on poems as they come, though I’m consciously trying to write about the world outside myself. Neruda’s odes are my inspiration. I have that wonderful volume, All The Odes, edited by Ilan Stavans. More gratitude! More praise! is my note to self.

A: I am thrilled that my husband’s art is on the front cover of the book! I know he would be too. The work is mixed media -- watercolor and ink, done in 2002. It’s titled "Our Woods."