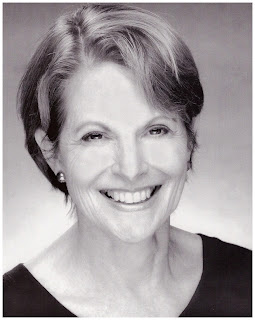 Charlotte DeCroes Jacobs is the author of the new biography Jonas Salk: A Life. She also has written Henry Kaplan and the Story of Hodgkin's Disease. She is a professor of medicine (emerita) at Stanford University, and she lives in Palo Alto, California.

Q: Why did you decide to write a biography of Jonas Salk, and what surprised you most in the course of your research for the book?

A: I always loved biography, even as a child. I had already written a biography of Henry Kaplan, who changed the world of cancer therapy, and was thinking through who I wanted to write my next biography about.

When I was a child, polio was very active, and there was an enormous fear of it, ranked second to the atomic bomb. Every summer there would be outbreaks. Once someone got polio, there was no treatment, and that increased the fear. No one knew how to prevent it, except stay away from crowds and pools.

In 1954 the March of Dimes conducted a large national trial of the polio vaccine by Salk. It took place in 211 towns around the U.S. My home town, Kingsport, Tennessee, was among the sites. I was in 2nd grade, and participated in the trial. I was called a Polio Pioneer. My mother saved my Polio Pioneer button.

In 1955, it was announced that the vaccine was a success. There was a celebration worldwide. Jonas Salk really was a hero of my generation. Into the 1960s, he was listed with Gandhi as one of the heroes of the world.

As time went on, I wondered what happened to Jonas Salk. There was no formal biography of him. When I was going to select my next subject, he was the obvious one.

Q: And what particularly surprised you?

A: I knew two things about him, the polio saga and that he had built the Salk Institute. Sleuthing as a biographer, you uncover one surprise after another. The biggest surprise was how his fame caused him pain. 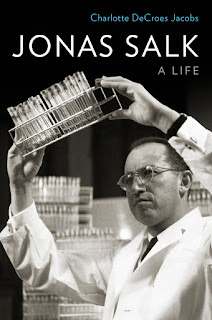 Q: You note that Salk “received almost no recognition from the scientific world.” Why was that?

A: It was for multiple reasons. He was not a traditional scientist. When you’re doing scientific work, you did it in a certain fashion [including writing] an academic paper in a set style reviewed by peers.

Jonas Salk didn’t do much of that. He described himself as a scientist who marched to a different drummer. He set out to make a vaccine, and he skipped multiple steps. He never wrote grants…he, in secret, made a vaccine and tested it. He didn’t play by the rules of academia.

Nobody wants to fault him, but he did it his way. In doing that, he made a vaccine with killed virus. There were three vaccines, smallpox, rabies, and yellow fever, and they were made with a live virus that had been weakened…He felt you could kill the virus and get immunity. He challenged one of the major tenets of virologists.

He was a shy person; he hated confrontation. When [the scientific community] first learned of [the trial], everybody was stunned. They knew nothing about it.

When the results of the trial were announced…lots of scientists had contributed basic work, but the public and the media put all the focus on Jonas Salk. They needed to have a hero. They didn’t want to know about [the others]. He was surprised. The announcement, in Ann Arbor, was called derogatory terms—a “circus,” “hoopla.” Scientists blamed Salk.

The third one is that because the public had funded the research, Jonas Salk felt connected to the public. He communicated with the public almost more than with other scientists. He did interviews with magazines, he went on radio and television. He had become the people’s scientist.

That was not how academics behaved. They thought he was pandering to the press, and they didn’t like that. There was always an element of jealousy. It was quite complex. Jonas Salk never confronted them. He was very polite.

Q: You write of Salk, "Jonas Salk achieved a level of public recognition accorded few in the history of medicine." How did his fame affect him, both personally and professionally?

A: Personally, he always said he felt the same, he was surprised about it, and he wanted to return to the laboratory and do research. He recognized that because of his fame, he could raise funds, and he built the Salk Institute. He did derive positive things from his fame. He never kept the gifts that were given to him. He didn’t think he’d changed.

In talking to his family, his son said that after April 12, 1955, his father was never the same. It wasn’t just that he was absent physically, but mentally as well. He was consumed by all of that. Other people felt he was affected by fame. He would make television appearances. He was obliging to the press.

On the other hand, he developed a shell. He had an outward persona for the public. It was hard to get to know the real Jonas Salk. He became more distant. He never could tell if someone liked him because of [himself] or because he was Jonas Salk. 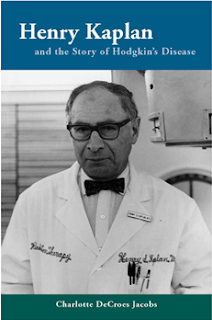 When he married Francoise Gilot, she was hounded by the press because she had been Picasso’s mistress…both felt they could be an island for each other.

He was definitely affected by fame. To the extent that he was changed by fame, it’s hard to believe that for anyone who was praised by heads of state around the world, it didn’t have some effect on [him]. He couldn’t do anything without causing a stir.

How did it affect him professionally? He wasn’t taken as seriously as before. He was a pretty junior scientist, but there weren’t scientific rock stars in that day. With the exception of Pasteur, no one had achieved such celebrity.

It did affect him professionally in terms of the reactions of the scientific community to his work. In some regards, some of his work wasn’t up to snuff. He tried to tackle cancer and wasn’t as adept…He would do a small experiment, and the next thing there would be headlines that he would cure cancer. Scientists would think he was telling the press that. It was very hard for him.

Q: How would you characterize the dynamic between Salk and Albert Sabin?

A: It is characterized in a lot of the literature as a feud, a race to see who would make the first vaccine. Salk wanted to make a killed vaccine, and didn’t share [his information] with Sabin. Sabin didn’t know. Salk was racing against time, before another summer went by. It wasn’t that he was racing against Sabin. Salk never viewed it as a race against a competitor, but as a race against the disease.

Sabin, on the other hand, really did want to go down in history as the person who made the first effective polio vaccine. It was very important to Sabin. But it wasn’t a race, because by the time Salk had done his experiment, Sabin wasn’t ready. Sabin was a brilliant and careful scientist. With a live vaccine, the stakes are much higher….

It wasn’t a feud, but Salk knew the live vaccine could mutate and revert to virulence, and cause polio. He spent the rest of his life trying to get [the U.S. Public Health Service] to reverse its decision [in the early 1960s to license Sabin’s vaccine].

That’s where the confrontation [emerges]. He became more and more bold. He used the media and worked with lawyers. He pulled out all the stops to get the Sabin vaccine delicensed. It was not because of Sabin, but because he thought we shouldn’t use live vaccine…

A: Now I’m giving interviews, writing articles, giving talks. I also still work as a physician. It’s a major undertaking, a biography of someone’s life. This took 10 years. I need to think it through carefully before choosing my next subject.

A: The only thing is that his polio work overshadowed many other things he contributed to. That’s one of the reasons I was interested in writing his life, not just the polio saga. He contributed in many fields—multiple sclerosis, AIDS, he built the Salk Institute, he wrote books on philosophy. He was quite an unusual man.

He wanted to combine [the work of] humanists and scientists at the Salk Institute. He did that in his own work. He imbued science with the conscience of man. He cared about the public in everything he did.