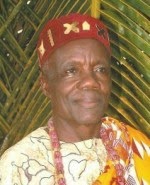 Agbotadua Togbi Kumassah is the author, along with Anna Cottrell, of Once Upon a Time in Ghana: Traditional Stories Retold in English, a winner of the 2014 Children's Africana Book Award. A former teacher and headmaster, he retired from the Ghana Education Service in 2003, and he is the current Secretary of Anlo Agbotaduawo Traditional Council and the Agave Clan Union of Anlo. He lives in Ghana.

Q: How did you meet Anna Cottrell and get started on the book project?

A: About eight years ago I retired from teaching, and I used to go to my former school…[Through a cross-cultural NGO I met with a group and] I was questioned on our culture, our traditions, our storytelling. So after the meeting, they left, but Anna stayed on, and I realized she was more interested [in learning about storytelling].

So the friendship started, and she told me she was interested in stories. I promised to take her to a village where there was a group of storytellers. I talked to the chief of the town, and they agreed that we should come. I was holding an old recording machine, and we went to a quiet place, a bit far from that town, and the storytellers brought their accompaniment, because they’d be singing…

I had to interpret the stories…she left back to England, and I posted a manuscript to her. She tried to rewrite them and send them back. I edited those words which were not the exact interpretation. After this backward, forward, transfer of the scripts, she came again the following year. We went to record more of the stories [after which] we had enough stories now, and I interpreted all of them, and send them to her, and she made a book.

The choice of the title was also something we discussed. At the time, we said "Under the Moonlight," or "Behind the Kitchen," or "Night in an African Village," but finally we settled on "Once Upon a Time in Ghana."

One thing she did that I’ve always appreciated is that when she sold the book, on her next visit she brought the money. And because the stories were told by people we wanted the people to benefit from the proceeds of the story, so we…found out what the people would like the money [to go toward—including a corn mill, fishing nets, a public water supply system, building a wall to prevent flooding]…In most cases, these were their own projects. They suggested the projects, and we only tried to raise funds.

Q: There’s now an edition of the book in Ghana. What has the reaction been?

A: Initially they published the book in England. The cost of the book was a bit high by African standards. So in order to publish it in Ghana so that Ghanaians could have access to the book, they initially wanted to publish it in the form in which it had been published in England, but when we approached Afram Publications, they wanted to make it a children’s book.

In that case, the stories should be selected, and so 10 of the stories were selected from the original 20-plus stories and the book was published by Afram Publications in Ghana….

Q: What has been the response to the book in Ghana?

A: When they learned that the book had won the award, it was appreciated….there was a rush to get copies. We are trying to get the ministry of education to adopt it as a supplementary book for kids in primary schools.

Q: What did you hope people would learn from the book outside Ghana?

A: I belong to a tribe…we were a very intelligent tribe, but in the Berlin conference of 1844 we were shared among four countries; it’s a very sad situation….

I’ve also learned that we were least understood by the West. The West thought they knew everything, and should give us what they knew, and for a very long time they were not expecting anything out of our country, so we were on the receiving end of whatever they could dole out to us. And those who perceived us, it was as mysteries, strange things, people in trees, living with monkeys, who did not have a sense of humanity.

So my first desire was to give to the world some of the treasures of my ancestors. It was an illiterate society [and] they recorded materials in words in which the history of the aspirations of my people…were all enshrined in the stories.

And unless you learn the stories, you might as well be starting a new life. The mistakes made years ago and the solutions found for those mistakes, those elementary mistakes of life and living…of life and death, the West needs those ideas.