Viola Shipman, the pen name of writer Wade Rouse, is the author of the new novel The Clover Girls. Shipman's other novels include The Heirloom Garden. Rouse lives in Saugatuck, Michigan, and Palm Springs, California.

Q: What inspired you to write The Clover Girls?

A: I always begin with what I call “The Big Question.” It’s always a question I’m struggling with and want to answer in my own life, and one I believe readers are as well.

In The Clover Girls, I was at a place in my life where I had lost my immediate family (mother, father, brother), and my friends had really taken the place of that and been there for me – like so many of us – this last year-and-a-half. I had also lost a friend and a father-in-law to Covid.

I began to look back at my life and remember when I was a kid, when I had BFFs who knew everything about me, every secret, and we dreamed we could be anything: An astronaut, a movie star, a star baseball player. And then adulthood knocks, and we are forced to grow up, and it distances us from not only these dreams but also too often these friends.

I asked myself, “Does this happen simply because we grow up? Or is it more than that? Is it because it’s too painful to look back at those times and ask, ‘What could have been? Why did I let go of those dreams and those people? To cushion myself from the hurt?”

There have been many love stories written about love, but I wanted to write a love story about friendship.

Q: How did you create your four characters, and how would you describe the dynamic among them?

A: The Clover Girls is probably the most challenging novel I’ve written to date because I wanted to focus on four very different women (and I mean, very different), who know in their hearts they were destined to meet and become friends because they need each other to be the best versions of themselves. 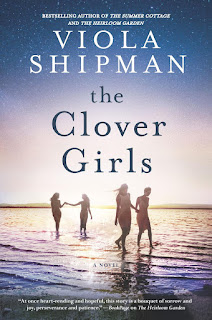 I based the four characters – Emily, Veronica (V), Elizabeth (Liz) and Rachel (their names spell out Friends Four-EVER) – not only on myself but also on very dear friends of mine.

Emily is a librarian, the stem who connects The Clover Girls, an introvert and empath who believes the girls’ childhood friendship made each woman better, stronger and more complete.

She was recently diagnosed with a terminal illness, and her dying wish is that her childhood friends can be reunited in order to recapture their friendship and become the women they once dreamed they could be.

V is an aging supermodel with two teenage children in a marriage that’s lost its spark. She is based on one of my best friends, a former Wilhelmina model.

Liz is a divorced real estate agent caring for her dying mother, whose children are distant and who has an Etsy shop where she sells ’80s-inspired fashion, her true passion and talent. Liz is based on me, someone who let fear rather than passion dominate her life for far too long.

And Rachel is based on many political pundits you see on TV. She is a former teen actress who now works for a misogynistic politician. She is abrasive and confrontational, but you come to realize it’s a defense mechanism because her friends hurt her deeply.

She’s based on friends of mine who have been so hurt by other women that scar tissue developed and remains on their souls.

The dynamic between The Clover Girls is very much like many friendships from our youth: There is a hierarchy, and though the girls are incredibly close, there is also a constant underlying tension between them because they all seek to be more to one another – and the world – than how they’re seen and stereotyped. And yet they love one another more than anyone in the world.

Q: The novel takes place in the 1980s and also in the present day. Did you focus on one timeline first, or did you write the novel in the order in which it appears?

A: I’m very much a “pantser,” but I do spend an inordinate amount of time developing my characters (I do elaborate character sketches) as well as the structure for my novels.

I think structure is key for telling a fascinating story, and one many authors tend to overlook (I try to structure every novel very differently and uniquely; in The Clover Girls, every chapter is centered around a traditional camp activity – Swim Test, Rope Burn, Color War, Sing-Along – which has deeper meaning for each character).

I did know I wanted to use parallel timelines, and I wanted to explore the 1980s, the time when I grew up, because it was so influential in my life (the fashion, music, movies, TV, hair) and also because it was really the last period of time before technology (I used a typewriter, wrote handwritten directions, I talked on rotary phones and stretched the cord from the hallway into my bedroom for privacy, I had cassette tapes and a Boom Box, my TikTok was standing in front of a bedroom mirror singing into a hairbrush).

It was while wrangling with structure that I thought, “We used to write letters! And we did at camp!”

When I knew that’s how I wanted to start the novel, I also immediately knew I wanted to parallel today’s time with the 1980s as a way to explore the girls’ friendship, histories, pasts, joys, losses, betrayals, because it’s those “ghosts on their shoulders” that make them – make all of us – who we are today, and it’s so impactful to parallel the then with the now.

I also wanted to explore the question, “Even with all the technology and social media we have at our fingertips today, are we more, or less, connected than we used to be?”

A: My Grandma Shipman (the pen name I chose to honor the working poor woman whose heirlooms, life, love, and sacrifices inspire my fiction) always used to say, “Life is as short as one blink of God’s eye, but we forget what matters most during that blink.”

To her, those were the “simple things,” the things we take for granted: Family, our health, a home, a sunrise and sunset. At the top of that list, for her and me, was our friends.

I hope readers appreciate what our forever friends have meant to us this past year (and beyond). I hope that we can find it on our hearts to forgive – not only ourselves but others. And I hope that we remember how fragile life is and not to live with regret, or live in fear, but to see the hope and possibility every single day. Because life is as short as one blink of God’s eye.

A: My first holiday novel, The Secret of Snow, will publish Oct. 26, and I’m deeply proud of it. It’s a very funny, deeply personal, emotionally raw novel about how the holidays can be so painful when you’ve lost someone you love.

I also have a holiday novella, Christmas Angels, an e-book publishing in October (the first of three), as well as two books in 2022: Miss Mabel’s Button Jar (tentative title, coming in May) as well as my first memoir in a decade, Magic Season (coming in June) about my rocky relationship with my Ozarks father and our mutual love for baseball and the St. Louis Cardinals, the only thing that ever bonded us.

A: I host a weekly literary happy hour – Wine & Words with Wade – every Thursday at 6:30 p.m. ET on my Viola Shipman Facebookpage. I welcome bestselling authors and publishing insiders and discuss books, writing, hope and inspiration (all with wine).

It’s growing like crazy, as is my e-newsletter, which includes info on my latest books, never-before-published essays, interviews with bestselling authors, giveaways, recipes, gardening tips and more (sign up at www.violashipman.com) … and follow me on Facebook and Instagram to join in on the fun.