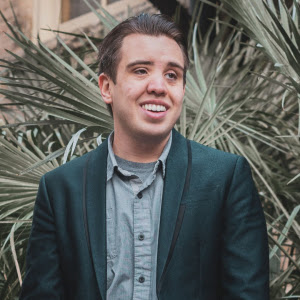 Mark Aaron Alvarez II is the author of the new novel Dutybound, the first in the Light Wings Epic series. He is based in Texas.

Q: How did you come up with the idea for Dutybound, and what inspired the world you write about?

A: Dutybound, or the Light Wings Epic in general, was inspired by a variety of different factors, but most notably my own wonderings of what life’s true purpose was or what my calling was to be.

You see, I survived a tragic accident when I was 4 years old. I was shot through the face by my younger brother in a gas station back in the old neighborhood I grew up in Houston.

This accident would have a profound effect on me and my way of thinking. I understood something most people I knew didn’t. I understood that our lives had purpose, that we all had a reason for living. A conviction, so to speak. A duty…

I didn’t grow up in the greatest of circumstances, and I can easily say I wasn’t taught the best morals. But I can’t really explain why my beliefs were shaped in this way, around this event that occurred so early in my life.

Since I was shot, I very much felt bound to a duty, a purpose I didn’t quite yet know or understand, and I think Light Wings is an expression of that. In a lot of ways, I was coping, struggling to understand the things happening in my life, but it was also me exploring and attempting to discover the source of my own morality within a world I was afraid of.

I created a whole world based on my own interpretations of the world I lived in, with its own belief and social structures in order to rationalize the things that happened to me, to see the bigger picture or grand scheme of things. All as an attempt to preserve what little hope I had in creating a better future for myself.

The world I knew then was not the world I wanted to live in, and I clung to this idea of surviving the darkest things possible in order to know what was truly right. 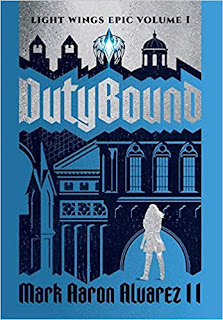 Q: This is the first of a series--did you know before you started writing this volume that the story would continue?

A: I actually intended for the Light Wings Epic to be one book with four parts. I originally wrote the entire series by hand before typing up the first Dutybound manuscript (then called Sinful Wishes) in high school. The first part came out to over 300 pages, so I was like “Oh dang, I’m going to have to split this up.”

A: There is definitely something beneath the surface with Dutybound. It’s got a lot of layers to it.

Terestria is allegorical. Its world is void of magic. Its leaders are flawed, some corrupted. We have these youths with beliefs imposed upon them, beliefs that distort their perceptions of the world and their identities, very much like the world we live in today.

The story, as a whole, draws on a lot of personal experience, growing up on one side of the socioeconomic spectrum and exploring how the consequences of one generation’s actions can affect the next, but it's very much a coming-of-power story.

Power is tightly correlated with knowledge, and knowledge is the only way the virtues can come into existence. When the truth is distorted and knowledge is manipulated, the consequences can be devastating. But when used correctly, it can be just, powerful, and become your ultimate strength in the face of all adversity.

These characters have to find their own truths, their identities and virtue beyond what they were told to believe to be true. And in many ways, I want to encourage readers to do the same. We are more than the lives we are born into, and our purposes are not defined by what we’re told but rather what we know to be true.

The quest for knowledge is a quest for power. Only you can decide what you can do with the truth once you have it. That’s all that matters. Understanding who you are is just the beginning of understanding your life’s purpose.

So, I hope Dutybound readers get the chance to question the things happening in their own lives and inspire a sense of conviction, rooted in the faith of oneself rather than the circumstances they live in.

A: I absolutely love the classics. When I first started writing, I drew inspiration from Edgar Allan Poe, Jack London, and F. Scott Fitzgerald.

But growing up I absolutely loved Harry Potter and a Series of Unfortunate Events. Before starting on writing the prose that would eventually become the start of the Light Wings Epic, I had just finished Harry Potter and the Deathly Hallows.

At the time, I had been working on a series of video game concepts for a role-playing game I wanted to create, but I was very much inspired by the final Harry Potter book to write a story of my own. So I took the narrative from my video game concepts and started putting it to prose.

A: I am currently working on the follow-up to Dutybound. Light Wings Epic Vol. 2 will be called Bloodbound and will take place mostly on the lands north of Aldric, beyond the sea.

There is so much more of Terestria to see: deserts, tundras, mountains, caves. I’m excited to give readers their first glimpses into the independent province of Gracile and Empire of Argania. There is a lot to be excited about.

What I’m most excited about is introducing the new characters and building on my band of heroes. The tone is definitely different as well. After everything the characters have gone through in Vol. 1, they’ll have a different attitude and approach to the challenges they face.

A: Another huge inspiration to the Light Wings Epic, and Dutybound, is music. Maybe one day, I’ll release a mix of all the songs I listened to writing this book. Many of which I remember vividly.

My creative process wouldn’t be what it is without music. To set the tone, the scene, and even rhythmically with its pacing, music very much played its part in the creation of Dutybound. It was and has always been the ultimate muse for my craft.