Karen Struck is the author of the new children's picture book Three Paws and the Secret Cave. It's the third in her Three Paws series. Also a registered nurse, she lives in Los Gatos, California.

Q: What inspired you to write Three Paws and the Secret Cave?

A: When my adult daughter lost her cat of 21 ½ years of age, she was distraught and emotionally affected by this loss. We discussed loss and the stages of grief. I witnessed her fluctuating emotions, loss of joy, sadness, and loneliness for an entire year.

To ease her loss, she created a collage of her favorite pictures that she has beautifully displayed along with a memory candle that she lights on her cat’s birthday and day of death.

My daughter’s loss of her beloved pet inspired me to read children’s books about loss and the Rainbow Bridge which led to the subject matter of book three, Three Paws and the Secret Cave.

My emphasis was focused more on the celebration of life for Cappy, the elderly mountain goat, who knew his time was near. His granddaughter, Scarlet, refused to allow him to hide away in a secret cave and die alone. Instead, she decided to celebrate his life while he was still living and honor him after his passing.

My favorite quote from this book is when Cappy tells Scarlet, “As the stars twinkle above, I will be waving to you. I will always be with you…in your heart.”

Q: How did you create the character of Cappy?

A: Cappy made his first appearance in book one, Three Paws. Although he was known as an elderly and wise mountain goat, I did not name him until book three. Yet he was a very influential mentor to my main character, Boots.

In Three Paws, Cappy loses his balance and slides down the side of a steep mountain. Boots, a young cub with only three usable paws, wants to eat the goat as is natural behavior for bears when facing an injured animal.

When he is faced with the plight of the injured goat, he recalls his own accident which enhanced his compassion for the injured goat. Cappy offered to teach Boots how to catch salmon if Boots would help Cappy return to the mountaintop.

Because the other bears and even his own mother did not think Boots could survive the Alaskan wilderness with only three paws, Cappy’s offer was a dream come true for Boots. 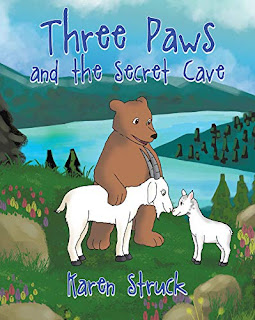 The two formed a lasting bond of friendship and mutual respect. Cappy inspired Boots to learn new skills due to his disability but continue to follow his dream of one day becoming a great salmon catcher in Ketchikan, Alaska.

Q: What do you hope kids take away from the book when it comes to issues of life and death?

A: I feel it is important to discuss the concept of death, dying, and the afterlife in terms that children can understand.

Three Paws and the Secret Cave is a way of stimulating conversation about the definition of death, grief, rituals, funerals and heaven. Different religions and cultures have their own views of death and the afterlife.

For me, I believe our physical existence dies but our spirit is eternal. Children sometimes need something tangible to help explain concepts. The stars and constellations remind me of spirit. We can’t see the stars during the day, but they always reappear at night. The twinkling stars could be a symbol to children of those we have lost. Their spirit is always with us.

There are many wonderful picture books illustrating pet heaven. I also appreciate the concept of the Rainbow Bridge where pets go after they die awaiting to be reunited with their humans upon their death. The same concepts could be used to explain the loss of humans as well.

When I was creating a name for Cappy, I researched constellations and found Capricornus, half goat, half fish. Cappy felt like the perfect name.

Q:  What first got you interested in creating children’s picture books?

A: My daughter and I shared a bedtime ritual of reading together. I loved the subtle messages conveyed in her stories.

Children can sometimes learn to deal with occasional struggles faced by most children when they can identify with a character from a favorite book or series. It helps them learn a variety of coping mechanisms. When they realize other children face the same fears and insecurities, they realize they are not alone.

Picture books and children’s books also serve as an escape into a world of imagination where anything is possible. The Harry Potter series is still my favorite series of all.

I thought it might be fun to write a children’s picture book and enrolled in the Institute of Children’s Literature where they teach people how to write for children from the comfort of our home at our own pace.

A: I am writing a five-book series and book four, Three Paws to the Rescue, is due to be released sometime this summer. The illustrations have just been completed!

The theme of book four focuses on the hero in all of us. Boots risks his life to save Pepe, the iguana, from being crushed by a large stone slab during an earthquake. Of course, there is a happy ending, but children can learn that they, too, can be heroes by simple acts of kindness.

This book addresses earthquake and disaster preparedness. Not only do we need a plan to protect ourselves during a disaster, but we also need a plan for our pets. I offer the name of a website for further information.

A: The last book of the series, Three Paws’ Christmas Wish, will hopefully be leased Christmas of 2022. I am working on my outline and I need it released close to Christmas. This Christmas is too early for the release as it takes several months for the illustrations to be completed.

I also have a Boots plushie that is created in the image of my main character from the cover of book one, Three Paws. It’s currently sold on my website, karenstruckauthor.com.

Thank you so much for this wonderful opportunity to share my book series and insights.