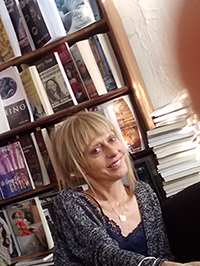 Stephanie Dickinson is the author of the new book Razor Wire Wilderness, which focuses on the lives of incarcerated women, including one named Krystal Riordan. Dickinson's other books include Love Highway. She lives in New York City.

Q: How did you first meet Krystal Riordan, and at what point did you decide to tell her story?

A: In July of 2006, Jennifer Moore was abducted after a night of clubbing and taken by Draymond Coleman, a small-time pimp, to a shabby Weehawken hotel room that he shared with Krystal Riordan. He raped and strangled Jennifer in front of Krystal. The New York Post’s headline read, Hooker Watched Boyfriend Kill Teen.

When I saw Krystal’s sad-eyed arrest photograph, which appears on the cover of Razor Wire Wilderness, I knew I wanted to understand her and explore the lethal collision of the worlds inhabited by two young women close in age.

How could she remain a passive accomplice and not help Jennifer, since she was able to leave the room?

I didn’t realize when I first wrote to Krystal at the Edna Mahan Correctional Facility for Women in Clinton, New Jersey, where she was and is serving a 30-year sentence, that I would devote years to telling her story and that of Maximum Compound.

We exchanged stories about ourselves, trading in the currency of give and take. Our first communication was a letter in 2012 and our latest communication, a JPay email took place days ago.  In the first letter I wrote: I have been thinking about you.  Tell me how you are doing. Tell me who you are.

Q: What do you think your book reveals about the criminal justice system, especially as it affects women prisoners? 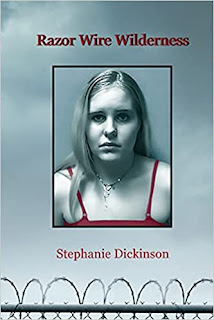 A: The criminal justice system has become a private-public enterprise with enormous profits being made by privately-held companies like JPay, Corizon, and Global Tel-Link, and this skews the rehabilitation model into a more punitive one, all of which my book illustrates.

A women prisoner may be pregnant and dependent on the medical unit to care for her and her unborn child. What happens if you’re pregnant and experiencing a bleed or having a seizure? Is the nurse really a trained RN or LPN?

What about the doctor who so consistently renders a misdiagnosis? Like the one who left EMCF in handcuffs after practicing for years having trained not as doctor but a veterinarian.

In Razor Wire Wilderness I follow Krystal Riordan through her wrist-cutting episodes, her pleas for counselling that are ignored. Her seizures for years go untreated—fugue states during which she hides in the bathroom calling out in a child’s voice for her youngest sister.

Inmates are not trusted and their medical complaints often dismissed as malingering. Lucy Weems [another figure in the book] discovered a lump under her arm, which turned out to be cancerous. Again, her many written requests to see medical personnel were ignored until an outside advocate stepped in and applied pressure.

A: Once you’ve befriended an inmate, the Maximum Compound of requests comes at you, things that only someone on the outside can finesse. They want help buying a toy for their daughter’s birthday from Kmart or Toys R Us. Some type of fashion design kit of lip glosses or a cute purse from Hello Kitty.

You, who can make duplicates of court documents, who can google and download welfare applications, who can Xerox copies in full color of the nameless photos that arrive in envelopes. The photographs are so old, especially those of the outside. Some are taped so they stick to the glass of the Xerox machine and you feel the heft of something precious in your hands.

Many are of children—wide-eyed toddlers, infants in flannel footsie pajamas; many of the children’s photos are old and those pictured have grown and left behind the selves they are here, but to their mothers, they are fixed; they do not change.

The longing those well-handled photos expressed made a powerful impression on me. I recognized too the stress the inmate mother experiences in trying to communicate with and parent her children from prison.

Additionally, I was struck by the arbitrary nature of the prison rules, how they seemed to change without warning, to thwart the basic needs of incarcerated women.

Beyond the monetization of the inmate, the human interactions between correction officers and inmates were often that are of humiliation and disrespect for the imprisoned. “If you leave EMCF for the hospital or any doctor’s appointment even if you are lacking a heart beat,” says Lucy Weems, “you be shackled, handcuffed, and driven in a doggy wagon.”

It does not go unnoticed by inmates that in the Puppies Behind Bars program, the dogs receive visitors, and when they go to the veterinarian they’re not caged or transported in a doggy wagon but a regular vehicle where they ride in the back seat.

A: I want readers of Razor Wire Wilderness to experience not only the harrowing side of a Maximum Compound, but the humanity of its inmates, a shared humanity. I was astonished at the importance of friendship, gift giving, and family.

Inmate mothers share photos of their children, tell each other about happy or sad phone calls. On children’s birthdays the tradition is for a group of inmates to make cupcakes and sing Happy Birthday to the child and if they can’t phone they sing to each other.

Valentine’s Day is another Maximum Compound signature holiday. Love and friendship are celebrated. For Valentine’s Day, the inmates go all out, ordering hand-painted cards, origami bracelets, and watercolor portraits. Everything is made by inmate artists.

As Jen Knox wonderfully wrote, “At its core, this is a story about friendship, but it is also about survival, what happens to us, and what we get to decide during our brief existence. It is about the way we live when we are caged, be that literally or figuratively, and the beckoning light of genuine human connection.”

A: I’m working on two projects. The first is a memoir entitled Age 18, in which I examine my 18th year, the year I was shot and my left arm paralyzed.

I’ve written of the gun incident but not its physical and profound psychological aftermath. Our country has experienced its share of mass shootings and many of the survivors are now living with a disability.

The second, Icons in Black and White: Bessie Smith and Jean Harlow Postcards, employs lyrical flash fiction in the form of postcards to examine and bring together two American icons.

Both died in 1937, Bessie Smith, age 43, in a car accident, and Jean Harlow, age 26, of acute kidney failure. Their artistically active years overlapped, they were sexual adventurers, the financial support of often ungrateful family, and brilliant women ahead of their time and, to my mind, our time—still ahead.

A: Razor Wire Wilderness is not only a true crime/incarceration memoir but a lyrical meditation on who is the victim and who is the perpetrator.  What is truth and why does it often seem so mutable? Three women form friendship bonds and work to transcend their own troubled pasts.