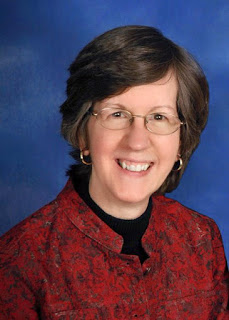 Joanne Rossmassler Fritz is the author of Everywhere Blue, a new middle grade novel for kids. She lives near West Chester, Pennsylvania.

Q: What inspired you to write Everywhere Blue, and how did you create your character Maddie?

A: Maddie came to me first, years before I realized she needed a novel! I had written a poem about taking oboe lessons when I was Maddie's age. But I never tried to get it published, and it simmered in my subconscious mind for a few years, until other ideas came to me about an oboe player, and I knew she had to be the main character in a novel.

Several different threads wove together to become Everywhere Blue. The oboe lessons, the blue morpho butterflies my husband and I saw on a vacation to the island of St. Martin/St. Maarten in 2014, my lifelong concern for the environment, and an unsolved missing person case in my area. All of this gelled into Everywhere Blue by the spring of 2015. (Please note: I changed all the details of the missing person case to protect the family.)

Q: Why did you choose to write the novel in verse?

A: It didn't actually start out in verse, despite that one poem I had written back in 2013! When all those ideas coalesced, and I started writing the novel in the spring of 2015, I wrote the first few chapters in prose. I had already written four novels in prose (not published), so it hadn't occurred to me to write any other way.

But I quickly realized it wasn't working at all, and that I should let that original poem stay a poem! It became part of the opening poem of Everywhere Blue. 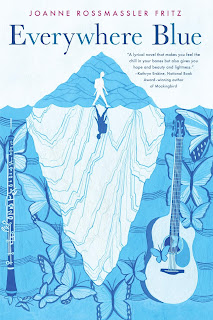 Q: Can you say more about why you decided to include music as a major theme in the book?

A: I always knew that music needed to be the overall theme of the book, only because Maddie plays the oboe and learns classical music. My own parents listened to a lot of classical music when I was growing up, but also plenty of Broadway show tunes! I quickly realized show tunes didn't fit into this novel at all. And once I realized how important classical music was to my character and her family, I knew it had to represent emotions.

A: Everywhere Blue is actually the third title this book has had. My first draft was called Everything In Its Place. By 2017, I had changed it to Blue Morpho. But my editor, Sally Morgridge at Holiday House, thought kids might not know what a blue morpho butterfly is, and she also thought it sounded a bit like sci-fi!

The staff at Holiday House came up with a list of titles, and Everywhere Blue quickly became the office favorite. I loved it too, so we all agreed on it.

A: I can't say too much because I'm a slow writer and nothing's finished. But I'm working on two different novels, a YA novel in verse about experiencing a brain aneurysm rupture, and a middle-grade novel that's not in verse.

A: Not everyone knows this because it's not in my author bio on the book's jacket, but I'm a two-time brain aneurysm survivor. Two different ruptures, 12 years apart.

The second brain hemorrhage, in late 2017, was far worse than the first. So I had to overcome a lot of obstacles to get this novel published. But I'm extremely grateful to be alive!