Cliff Burke is the author of An Occasionally Happy Family, a new middle grade novel for kids. He is a middle school teacher in the San Francisco Bay Area.

Q: What inspired you to write An Occasionally Happy Family, and how did you create your character Theo?

A: There are a number of things that inspired me, but the most direct inspiration was a trip I took with two friends through some National Parks.

As we were hiking through different parks, we kept passing traveling families that seemed to be at the lowest point of their vacation. One of the parents would be really excited and trying to cheer everyone up, but everyone else would have different degrees of complaints and irritation, particularly the kids who just wanted to sit down for a while.

So that was the first kernel – a family trip with a parent who is excited, and two kids who were maybe excited as some point, but had reached the end of their appreciation for hiking in nature.

Theo is largely modeled on how I felt as a kid. I was a very poor Cub Scout, only lasted in Boy Scouts for a few weeks (there’s a Boy Scout anecdote in the book that’s more or less true), and was not very good with outdoor activities. I was also pretty quiet, kept to myself and my own interests, but had a lot of internal opinions about everything.

And the aspects of Theo as a budding graphic novelist are a composite of some of my 6th grade students over the years. I’ve taught at the middle school level for nearly a decade now and some of the most creative students who turn in these wonderful stories are entirely silent in class, just doodling away and trying to not draw too much attention to themselves. I wanted to give them a moment in the spotlight of a middle-grade story.

Q: The Kirkus Review of the book calls it "A masterful look at loss and mourning wrapped up in a hilariously painful family vacation." What do you think of that description, and what did you see as the right mix between grief and humor? 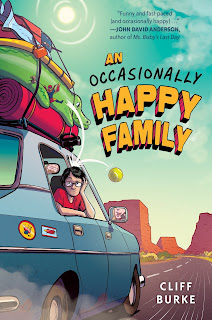 A: I love it! I’m very appreciative of the Kirkus Review and it was my goal with the book to 1. make people laugh, and 2. realistically depict the mourning process of kids in a way that doesn’t completely overtake the narrative and turn it into more of an “issues” book.

I think it’s a very delicate balance when mixing a story of grief with humor, particularly in a book for younger audiences.

I have direct experience with losing a parent as a kid so felt that I could access that voice and those feelings in a way that was honest. I wrote the comedy scenes as more or less pure comedy connected to the characters but was always aware of when something would touch upon a painful memory for the main character, Theo.

As enough memories start to build, it naturally led towards some emotional conversations between the family towards the end of the story.

A: I had no idea what the end would be before I started! I also made a lot of changes along the way.

I originally started this book as a National Novel Writing Month project, aiming to write 50,000 words in a month. The very first opening was “We would travel to 10 National Parks in 30 days. That was the plan. It wasn’t my plan, or my sister Laura’s plan. It was Dad’s plan and, therefore, not very well thought-out.”

Like the dad, I’m also not great at planning, so while I intended the family to visit many parks along the way and for an incident relevant to each park to take place at each, I soon realized that I had written 15,000 and was still on Day 1 of the vacation.

Instead of cutting all of that down, I realized the beats of the journey which I envisioned could easily take place over a single week in one location.

And without spoiling the ending, I did always have a secret visitor joining the tail end of the trip, but did not know how it would resolve until I wrote more about the characters and figured out how they would realistically respond to the situation.

Q: Why did you choose Big Bend National Park as the setting for most of the book, and how important is setting to you in your writing?

A: Connected to the above point, I originally envisioned Big Bend as the first locale as it’s the closest major national park to the family in Austin, Texas.

I was living in Austin at the time and talk of Big Bend is very present. From the first month I moved there, people asked when I would visit. So eventually I did, and there is more than enough there to write multiple books.

To the second part – setting is a big part of writing for me. Once I decided to set the book entirely in Big Bend, I took another trip there just focused on detailing the scenery, noting the people hiking and hiking, and feeling the textures of places around the park.

I try to incorporate as much first-person accounting of real areas as I can, and also read a lot of Big Bend travel blogs, watched a lot of YouTube videos and read about the history of the park from the National Parks website and local historians.

A: Right now I’m working on another middle-grade comedy that mixes in some sadder elements and themes. This one is also contemporary, but set in rural France on a farm hosting visiting students from around the world. I’m excited about the story and characters and hope to see it out in the world sometime in the future!

A: During the early months of the pandemic – March-May 2020 – I went for one-to-two-hour walks every day and spent the time listening to music and constructing character-specific playlists connected to the book.

This was mostly just to keep my mind occupied, but quickly became something I looked forward to adding to/pruning as I walked around my neighborhood and nearest park in Austin.

I even made an extra-long, six-hour Dad’s Car Playlist with the kinds of songs the dad would play while driving across Texas – mostly ‘70s rock, country, funk, things related to the Grateful Dead. I don’t know how much appeal this has for young readers, but I enjoyed making it, and may post it on my website closer to the book release for those interested.