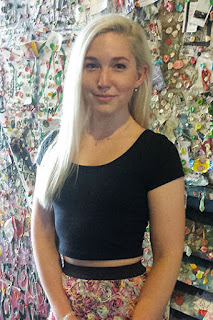 Alexandria Bellefleur is the author of the new novel Hang the Moon. She also has written the novel Written in the Stars.

Q: How did you come up with the idea for Hang the Moon?

A: Hang the Moon can be read as a standalone, but it’s a companion novel to my debut, Written in the Stars.

Brendon Lowell, the hero in Hang the Moon, was first introduced as the well-meaning but slightly meddlesome brother of one of the heroines in the first book. Brendon is the creator of a successful dating app and he was the matchmaking force that originally brought the two leads in Written in the Stars together.

It was always my plan to give Brendon his own happy ever after. He’s a hopeless romantic who loves rom-coms and cries at proposal compilation videos on YouTube…but he himself has never been in love.

I thought it would be fitting if Brendon decided to woo his love interest, Annie, by taking cues and recreating elaborate dates from some of his favorite romantic films.

I also knew that I would have to challenge some of his beliefs and misconceptions around modern love and dating, and who better to facilitate that than a heroine who has given up on dating and is jaded when it comes to romance? 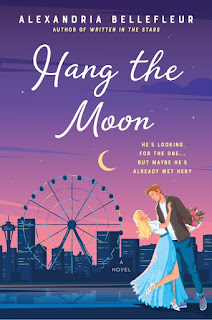 I wanted both Brendon and Annie’s ideas around what romance means to evolve, and of course, it’s a rom-com, so I wanted it to be funny. Every elaborate date goes slightly wrong, but what appears to be a failure on the surface actually brings them closer together.

Q: The Kirkus Review of the book describes its plot as a "woman who doesn’t believe in love and a man who's made finding love his life’s work discover that real romance is more complicated than either imagined." What do you think of that description?

A: I love that description and I think it manages to capture the heart of the story I set out to tell. Though, I’d say it isn’t so much that Annie doesn’t believe in love, as she believes lasting romantic love is rare and not in her cards.

Annie’s tired of being ghosted and of the swipe culture surrounding dating apps. She’s jaded, whereas Brendon is a hopeless romantic who loves love even though he doesn’t have any firsthand experience being in love.

They each have strong beliefs about love and romance, and over the course of Hang the Moon, they learn from each other.

A: I actually came up with the title for Hang the Moon prior to writing the first novel in the series, Written in the Stars. It was really one of those lucky situations where the title just popped into my head and fit the story I set out to tell perfectly.

In addition to keeping with the theme of celestial-inspired titles, I knew this book would follow Brendon, a hopeless romantic. The title is dreamy, but also ties in nicely with the discussions Brendon and Annie have about the differences between falling in love and staying in love, and infatuation versus real love.

A: I set out to write a rom-com full of nods to my favorite romantic movies and all the laughs and swoons the genre entails, so primarily I hope Hang the Moon brings readers joy.

Also that the best romantic gestures don’t need to be grand, but they do need to be personal.

A: Recently, I finished revisions on the third book in the series and will be diving into my copy edits soon.

Count Your Lucky Stars will be released on February 1, 2022, and will focus on Margot, a secondary character throughout the first two books. It’s another sapphic romance like Written in the Stars and I’m so excited for readers to see Margot get her happy ever after.

A: I’ve put together a bunch of fun extras like book and character playlists and those can all be found over on my Instagram. https://www.instagram.com/a.m.bellefleur/