Caterina Bonvicini is the author of the novel The Year of Our Love, now available in an English translation from the Italian by Antony Shugaar. Bonvicini's other books include Fancy Red. She lives in Rome and Milan, Italy.

Q: What inspired you to write The Year of Our Love, and how did you create your characters Olivia and Valerio?

A: Olivia's partly based on my own childhood memories, but the grown-up Olivia's quite different from myself as she is merely a product of her environment, upbringing, and what a girl of her status was supposed to become even though she did try not to succumb to all that and be different, but she just couldn't find her path.

Whereas myself, I did quite the opposite by not maturing into what was expected of a young woman of my background and through familiarising myself with the culture and literature and all facets of life of the working class.

I made friends who came from all walks of life, and different classes of the society and said no to the status quo and all the rules and rituals that should have governed my life.

The concept of the novel actually came to me as a direct result of this attitude of mine. I was greatly inspired by one of my best friends: Valentina. She’s like a sister for me; I met her in Rome. Our stories are totally different: she grew up in a working-class suburb. We lived the same historical events but from two opposite points of view and that was a really interesting comparison. Our own memories are a product of the social class we belong to.

Q: The novel spans several decades--did you need to do any research to recreate the time periods you wrote about?

A: I always do thorough research on subjects I write about. In this novel, though, I wrote about the so-called “Years of Lead,” a period of social and political turmoil in Italy that lasted from the late 1960s until the early 1980s, which I lived through myself.

So I drew on a lot of my own childhood memories but then I had to read about the historical events that occurred when I was too young to perceive. I remember the bombing of the train station in Bologna, the kidnappings and how afraid my parents were of something like that happening to me. As for the Berlusconi era, I was already old enough to remember those years and their historical events vividly. 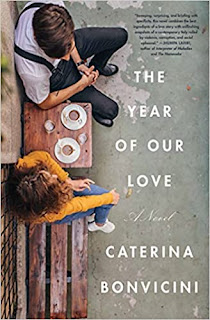 Q: Jhumpa Lahiri wrote of the book, "Sweeping, surprising, and bristling with specificity, this novel combines the best ingredients of a love story with unflinching snapshots of a contemporary Italy roiled by violence, corruption, and social upheaval." What do you think of that description?

A: Jhumpa Lahiri knows the Italian literature tremendously well, she has a very good command of the language as well, and she herself is now writing beautifully in Italian.

Not only has she translated a number of valuable works from Italian to English, such as Domenico Starnone's novels, but she has also curated a selection of short stories by a variety of Italian writers of the last century.

To put it simply, she has acted as a bridge between the Italian culture and the American one, much like what Vittorini did, just the other way around. I was exceedingly grateful for her comment and coming from her it meant a great deal to me.

A: I tend to do several rewrites and I worked three years on this one so there have been several drafts. I didn't know the ending but I was sure I wouldn't have gone for a happy ending as I was inspired by life as we know it which doesn't always, if ever, have a fairytale like happy-ending.

I did, however, leave the ending somewhat open as I reckon I might pick it up again may be a few years down the road and continue the story maybe against a different background, a different time period and historical events.

Olivia certainly lives a life that's not similar to mine in the way of her personal and family relations, her parents, lovers, and so on. The only one thing that I was inspired with was Olivia's grandmother, who was based on my own grandmother who passed away around the time I was working on the novel. I tried to see the events of the story through her eyes and be her voice.

A: About three years ago I almost completely changed direction. I started going to the central Mediterranean with NGO vessels to save migrants at sea. I took part in two missions at sea onboard the Mare Jonio Mediterranea and another one along with Doctors Without Borders and Sos Méditerranée onboard the Ocean Viking.

I was deeply touched and moved by what I saw and I started writing a work of nonfiction on this eye-opening and striking experience. What's so haunting about it, though, is the fact that in a way it is very much like a novel, one that is very true-to-life, however, telling the tragic life story of people who are living through these events today as we speak.

A: Just a piece of trivia really. I wrote the whole thing while listening to Bob Dylan and this was before going to New York and seeing him in a live gig. At that time (2014) I could not imagine that I was listening to a future Nobel prize.

Then there was just an odd fact: When the novel was published, a friend of mine who'd read it told me how much it reminded her of Dickens' Great Expectations. It just hit me in that moment how much I had been influenced by Dickens' masterpiece without having ever consciously thought about it.