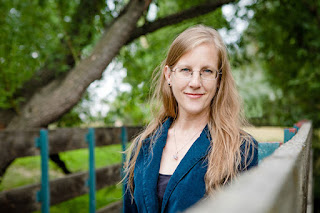 Carrie Vaughn is the author of the new novel Questland. Her many other books include the Kitty Norville urban fantasy series. She lives in the Boulder, Colorado, area.

Q: What inspired you to write Questland, and how did you create your character Dr. Addie Cox?

A: I noodled around with the idea for Questland for a long time. It's the convergence of several different threads:  the Arthur C. Clarke quote about how sufficiently advanced technology is indistinguishable from magic, how a lot of cutting-edge tech can be used to replicate magical occurrences, combined with a love of theme parks and fantasy role-playing games. It's Jurassic Park for fantasy tropes.

Addie is also the convergence of several different ideas. I really like putting unlikely characters in these kind of big adventure/thriller stories. She's a quiet literature professor, not generally regarded as kick-ass, but she's still got skills and know-how that are useful in this situation.

I love looking at that kind of story through characters who are somewhat outsiders, who aren't sure of themselves, and who can be a little more analytical. I think that can potentially give readers a whole different perspective on stories like this.

There's a little of me in her, too—my degrees are also in literature so I could really let loose with my own tastes and ideas and commentary through that. 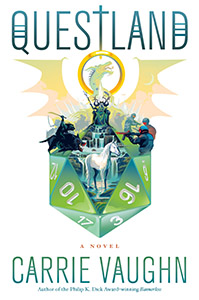 A: I usually try to figure out the ending before I start, so I know where I'm going even if I don't always know how I'm going to get there. This story went through a lot of versions—I initially tried to write a shorter version of it, but it kept growing and growing.

Also, oddly enough, it became more relevant. Immersive theme parks like Disney's Galaxy Edge for Star Wars and the Wizarding World of Harry Potter are big business in a way that they weren't when I first started working on this, and tech billionaires are definitely in the news now, which makes the character of Harris Lang much more interesting.

Mostly, the story kept expanding the more I worked on it. It's probably a good thing I was able to finish it when I did!

Q: You've written more than 20 novels and about 100 short stories--are you usually working on more than one book or story at a time?

A: Usually, yes. Often, if I get stuck on a novel draft, I'll take a break and write a short story to try to shake loose the cobwebs or give me a new perspective.

Finishing a short story is also a big confidence booster. That I've written so many short stories tells you how often I get stuck on novel drafts!

Q: What do you hope readers take away from Questland?

But I also hope it gets people thinking about fantasy violence versus real-world violence, and why fantasy stories are so popular and so important. These tropes and stories persist because they mean something.

A: I'm working on a couple of novellas that are a spin-off from my Kitty urban fantasy series, and I'm revising what I'm hoping will be a new YA novel, a historical fantasy.

A: I'm grateful for my readers and I really appreciate all the interest in my work! Onward and upward!