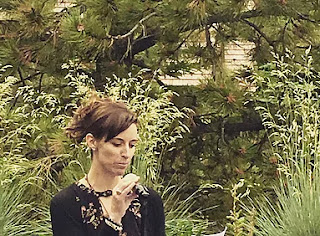 A.K. Small is the author of the new young adult novel Bright Burning Stars, which focuses on two ballet students in Paris. Her work has appeared in a variety of publications, including the Bellevue Literary Review.

Q: How much did you incorporate your own experience as a ballet student into Bright Burning Stars?

A: I love this question. I think a big part of why I began writing BBS was to re-enter the world of ballet, almost like allowing myself a do-over, if you will.

I quit dance at the height of my potential and later deeply regretted my decision. I used the memory of my own “studio” and “stage” experiences a lot while drafting the story. The physical aspect of ballet and the various dance scenes are very much me inhabiting my old dancer body and mind. 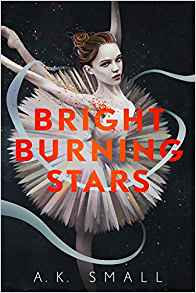 Q: You tell the story from the alternating perspectives of Marine and Kate. Did you write the chapters in the order in which they appear, or did you focus more on one character and then turn to the other?

A: I wrote the chapters in the order in which they appear and also always knew that BBS was about two dancers. At the onset, I chose Marine to be the main character which is why she opens and closes the novel. Once the story had a beginning, middle, and end though, I did re-read Marine’s sections as well as Kate’s separately to see what they felt like as stand-alone.

A: No. I didn’t know how the novel would end. All I knew was that Marine and Kate were capable of a great deal and that their threshold for pain was high. I remember at one point in one of my last drafts asking myself the question the girls ask each other in the first chapter, which is “Would you die for The Prize?” I sat there crying, unsure as to who might push herself too far and never recover.

Q: Did you need to do any research to write the novel, and did you learn anything that surprised you?

A: I did research on both Nanterre—the current school of the students of the Paris opera—as well l’Opéra Garnier where the rats used to rehearse years ago and perform still today.

I also watched quite a few documentaries (Frederick Wiseman’s La Danse especially) and videos of the dancers. I read Patrick Dupont’s memoir, Étoile, when I was working on Cyrille and Benjamin. I also grew up around the neighborhood and learned a lot while I was living nearby and taking ballet classes.

The most surprising discovery was finding a beekeeper at the palace. Actual honey is still being harvested in the middle of Paris on the roof of this famous opera house! They sell it in a beautiful jar titled Miel de l’Opéra.

A: I’m working on a new novel. I can’t say a whole lot yet, but it’s also set in Paris in my old neighborhood. It’s about orphans, feathers—lots of feathers! —a disappearance, and what it means to find your voice even when it’s been buried for a very long time.

A: I’d say that another significant part of BBS for me revolves around Marine’s eating disorder and Kate’s depression.

I think it’s super important for teens today to know that they can get help and that depression and other mental health issues are currently a pandemic. It doesn’t only happen to elite athletes. I have three beautiful daughters, two of which struggled with depression. Please reach out if you don’t feel well.