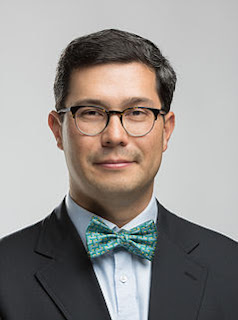 Steven Ujifusa is the author of the new book Barons of the Sea. He also has written A Man and His Ship. He lives in Philadelphia.

Q: How did you first get interested in the 19th century clipper ships, and why did you end up writing Barons of the Sea?

A: I have been fascinated by ships and the sea since early childhood.  My first book, A Man and His Ship: America's Greatest Naval Architect and His Quest to Build the SS United States (Simon & Schuster, 2012), grew out of my love of the great transatlantic ocean liners of the 20th century.

When considering a topic for a second book, I decided to go back a century and look at another type of fast ship that revolutionized global commerce.

Barons of the Sea also is about a quest to build a transcendently beautiful type of vessel, the American clipper ship, but it is also the story of dynastic ambition. The clipper ships were not the end goal, but the means to a goal: American dominance of global trade and great wealth for the owners.

The American clipper ships were the perfect balance of beauty and commerce. As naval historian Samuel Eliot Morison wrote:

With no extraneous ornaments except a figurehead, a bit of carving and a few lines of gold leaf, their one purpose of speed over the great ocean routes was achieved by perfect balance of spars and sails to the curving lines of the smooth black hull; and this harmony of mass, form and color was practiced to the music of dancing waves and of brave winds whistling in the rigging.

In the early 19th century, the American government placed virtually no regulations on ship design and operation, so profit maximization was the principal design consideration.

By the mid-1840s, American clippers had cut the sailing time between China and New York almost in half. American customers got their tea faster and were willing to pay a high price for the season’s first pickings. High value freight more than made up for the extra crew cost and reduced cargo capacity. During the California Gold Rush, clipper ships carried the freight that built the modern city of San Francisco. 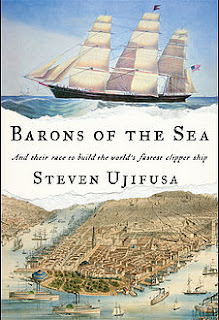 Q: You begin the book with Warren Delano II, the grandfather of FDR. What intrigued you about Warren Delano, and why did you start by focusing on him?

A: The men and women in Barons of the Sea were talented and driven in so many different areas (shipbuilding, navigation, and trade), but they were all intensely loyal and ambitious for their families.

FDR's mother, Sara Delano Roosevelt, who as a young girl traveled to China on the clipper ship Surprise in 1862, claimed that her son was more a Delano than a Roosevelt. Being a Delano meant love of risk, grace under pressure, and shrewdness. Her father Warren Delano II (1809-1898) led a life worthy of a novel.

The son of a whaling captain, he spent his early years in China, making a fortune in the opium and tea trade. Upon his return to New York, he reinvested that fortune in clipper ships, coal and copper mines, and Manhattan real estate.

He was a devoted father who would do anything for his wife and children, but he also had little shame about being involved in the drug business or owning fast ships that sacrificed safety for profit.

In 1938, after three decades of living with Delano family drive (both from her husband and mother-in-law) she wrote, “families are the most interesting thing in the world…for in the story of every family is the stuff from which novels and eventually history is written.”

I did plenty of traditional research, most notably at the Franklin Delano Roosevelt Presidential Library, the Peabody Essex Museum, and the Mystic Seaport Museum.

And then there’s discovery of a document from Hong Kong dating from 1867, written in both Chinese and English, hidden away in the Delano family papers.  My jaw dropped when I saw it. To find out more, read the book! 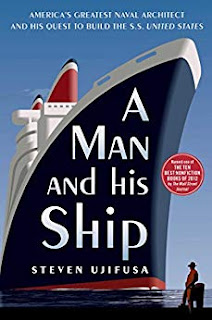 But the real surprises came when I got to meet descendants of many of the “barons” about whom I had written. The Delano descendants proved amazingly helpful.

One provided me with a collection of mid-19th century family photos that had been stowed away in an attic for decades. More importantly, family lore backed up much of what I had found hinted at in the documents I had found.

Thanks to another descendant, I ended up inside the Delano family mausoleum in Fairhaven, Massachusetts, just hours before my book talk at the New Bedford Whaling Museum.  I never imagined I would end up so close to my subjects…

Q: What do you see as the legacy today of Delano and the others who were involved in the trading you write about?

A: The founders [of the clipper ship fortunes] and their descendants became the backbone of New York and Boston’s aristocracy, holding positions of leadership in government, finance, education, and the arts.

John Murray Forbes took his clipper ship fortune and plowed it into the Michigan Central Railroad. He gave liberally to many Boston institutions, including the world-famous Milton Academy prep school. John’s son William Hathaway Forbes—who married the philosopher Ralph Waldo Emerson’s daughter, Edith—was one of the founders of the American Telephone and Telegraph Company (AT&T).

Incidentally, Warren Buffet’s famous Berkshire Hathaway also had its origins in whaling and the China trade, through the Hathaways of New Bedford, Massachusetts.

Members of the Grinnell family, which had ownership stakes in the famous clipper ship Flying Cloud, also helped found SimplexGrinnell (now a subsidiary of Tyco) and Wamsutta (now a subsidiary of Springs Global). Actress Edie Sedgwick, one of Andrew Warhol’s “superstars,” was a descendant of Moses Grinnell’s business partner Robert Bowne Minturn.

Another clipper ship magnate, Abiel Abbot Low, invested his clipper ship earnings in the Baltimore & Ohio Railroad and the transatlantic cable. His son Seth Low served as president of Columbia University and the mayor of Brooklyn and New York City. Columbia’s Low Memorial Library was paid for by the Low family fortune.

And of course, Warren Delano’s grandson Franklin Delano Roosevelt, the 32nd President of the United States, led the nation through the Great Depression and World War II.

A: I am working on a third book right now. In addition to writing books, I also write histories on commission for corporate and private clients.

A: The writing of Barons of the Sea was not a linear process.  For about a year or so, I was just plain stuck, and I disliked what I had written up that point.

It took the support and encouragement of my wife, Alexandra, as well as my editor Megan Hogan at Simon & Schuster and agent Becky Sweren at Aevitas Creative to help me get over my funk and press ahead.

Yes, a lot of writing is solitary, but it can’t be done in an emotional vacuum. Faith and confidence in you from others makes the creative process all worth it.