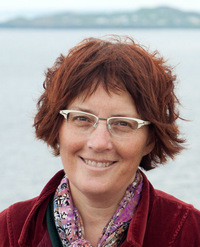 Charis Cotter is the author of The Ghost Road, a new novel for kids. Her other books include The Swallow and The Painting. She lives in Newfoundland.

Q: How did you come up with the idea for The Ghost Road?

A: I live in a beautiful spot in Newfoundland, with ocean on one side and a series of hills and meadows on the other. At a certain spot on the road that leads up over the hill and into the meadows, you can see the very faint outline of where there used to be a road, 60 years ago.  When I first saw it, I started calling it the Ghost Road, and I have wanted to write a story about it ever since.

I’ve also visited some forgotten graveyards in Newfoundland, and they are so lovely and timeless that they gave me story ideas too. And there was a tsunami in Newfoundland in 1929, where whole houses were swept away, along with the people in them, and that also took root in my imagination.

Early in my thinking about the story, I imagined a ghost coming into the girl’s bedroom carrying a candle, and the story just went on from there. My mother’s family is from Ireland, and I have a strong sense of my female Irish ancestors and the burdens of shame and guilt that get passed down in a family. All of this influenced my story. 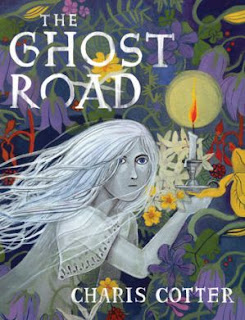 Q: The novel focuses on many generations of twins. Why did you include that as one of the book's themes?

A: I’ve always been fascinated by twins. For centuries, twins have been held in awe by the rest of us: they seem to have a magical quality and connection to each other.

I like the idea that a twin is never alone, that they have one person who completely understands them. Like they’re two parts of one whole. The essential loneliness of human beings seems somehow mitigated by being a twin, and that idea appeals to me.

All of my books so far have had two protagonists, not twins necessarily, but friends who have a lot in common. I really like the idea of an ally: someone who you can depend on and who is going through the adventure of life by your side. All the poor twins in The Ghost Road have a dreadful time, but at least they have each other.

There’s also something about the repetition of twins in every generation that underlines the power of the curse and the feeling that this family has to keep going through the same struggles until they find a way to break the pattern. 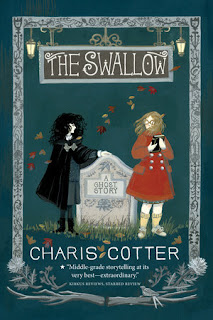 Q: The Ghost Road takes place in Newfoundland. How important is setting to you in your writing?

A: Setting is very important. The place a story happens really holds the power of the story for me. I usually start with the setting and the story grows from there.

I find Newfoundland very inspiring, and in both The Painting and The Ghost Road, the presence of the ocean and the lonely landscape function almost like another character in the story.

The Swallow was set in Toronto in two old houses that backed on to a cemetery in one of the oldest parts of the city. This cemetery cast a pall over the houses and their inhabitants, forming a backdrop for the ghostly activities that plague the two main characters.

My next book is set in a haunted Georgian house in a small town that could be anywhere in North America. With that book, it’s the house itself that generates the entire story. 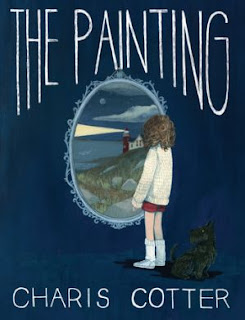 A: My all-time favourites are Jane Austen, William Shakespeare, and J.R.R. Tolkien. The classics. I can read them over and over again. I also love Gabriel Garcia Marquez, Isabel Allende and Carlos Ruiz Zafon (the Spanish contingent!)

A: I’m working on a book about a girl named Alice who has a hard time distinguishing between what’s her imagination and what’s real. Her parents are in the process of splitting up, and she and her mother go to live in a haunted house in the country where Alice has some very disturbing experiences.

As with my other books, I’m exploring how characters can find their inner strength while negotiating a world where nothing is ever quite what it seems. I’m having fun with the ghosts!

A: I used to be an actor, and I think this helps me when I’m writing dialogue. I believe that many of the creative arts feed into each other. One of the ways I still get to perform in front of an audience is by visiting schools with my books and telling Newfoundland ghost stories. I really enjoy working with kids and it helps me keep in touch with my readers.

Thank you for inviting me to your blog, Deborah. It’s been a pleasure!