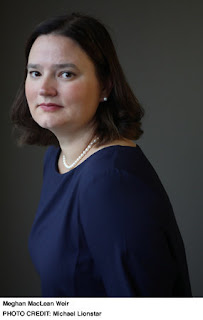 Meghan MacLean Weir is the author of the new novel The Book of Essie. She also has written the memoir Between Expectations: Lessons from a Pediatric Residency. She is a physician in the Boston area.

Q: How did you come up with the idea for The Book of Essie?

A: I wrote Essie at a time when my parents had moved in with my husband and me to help care for our children. We were incredibly lucky, but it was also challenging at times to be living with my parents as an adult, and it made me reexamine what it had meant to me, growing up, to be the daughter of a small-town Episcopal priest and to always feel as if I was being watched and judged and reported on.

Essie is under much more scrutiny than I ever was, given that her family is on a reality show and so is watched by the whole country rather than just the parishioners at her father's church, but I think that makes it more interesting for the reader, that the stakes for her are so high.

I also wanted to tell a story that would reflect on the ways in which we, as a society, sometimes fail our young people. As a pediatrician who works primarily in an ER, I see the impact of that all the time. It was important to me to give a voice to the sort of brave and strong young women I am privileged to work with and for when I am at the hospital.

Q: The novel is told from three characters' perspectives. Did you always plan on that structure, and did you write the novel in the order in which it appears, or did you focus more on one character at a time? 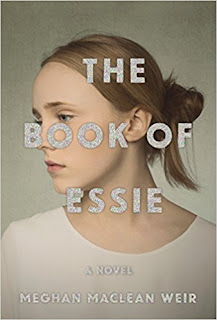 A: I intended for it to be Essie's story, primarily, but knew from the start that she would not be able to tell all of it herself.

Because I wanted it to be in the first person and give her a voice, but didn't want to have her sneaking around corners and listening in conversations just at the right moment to reveal some plot twist (though she is listening in on a conversation just as the book opens), I needed to find at least one other character to share the narrative with.

Expanding the narrative to include Roarke and Libby, with whom Essie seems to have very little in common when the story begins, and to see the way they misunderstand each other and begin to slowly develop trust, was part of what was so fun about writing this story.

I wrote the chapters in the order they appear and then went back through during the editing process to try to refine each voice.

A: I did. In fact, the ending was the only thing I was really sure about. There's a scene early on, where Essie first meets Libby, and I knew I had to get from that moment to the end where they are all on the steps of the church after the wedding.

I wanted Essie to be given a chance to stand up and tell the truth about the things that had happened to her, but I also wanted to be honest about how difficult that can be.

This is not a story about a victim. By the time the novel starts, Essie already has a plan for how to put her past behind her and take steps toward ensure a safe future, for herself and for the child she is carrying. But even with that sort of resolve, taking that final leap requires extraordinary bravery.

It's been so very inspiring to see women [recently] do exactly what Essie had to and to be witness to this moment in our history as a country when we ask ourselves just what it takes for a women to be believed. 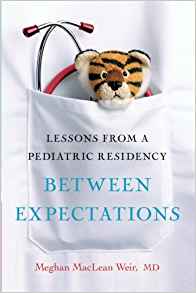 For women who are not famous, the way Essie is, who cannot rally an army around them, who do not have physical evidence of an assault the way she did, it's been gut-wrenching to watch so many women be discounted and dismissed. We need to do better.

Q: What do you think the book says about religion?

A: I think it says a lot about power, not necessarily religion. There are certainly times when people hide behind religion, claim that their righteousness means they can't possibly have done the horrible things they are accused of doing. And that makes me angry not only because it's wrong but because it's incredibly hypocritical.

When far right conservative Evangelical leaders support politicians who openly advocate violence and demean women and support systematic racism, that's very un-Christian, and it's been encouraging to hear more and more religious leaders say that out loud and call for a reckoning.

But that reckoning is not only needed in our churches and other religious institutions, it's needed throughout society. Medicine has been cleaning house, recognizing that patient care suffers when the brilliant surgeon is verbally abusive and others on the team are discouraged from speaking up in emergencies, but it still has a long way to go.

Our politicians have given lip service here and there to needed to be more accountable, but of course they still tend to look the other way when it suits them. I desperately wish Essie's story didn't feel so timely, but the fact that it does just means we need to fight for change and accountability from those in power.

A: I'm working on a couple of different pieces. One story is an examination of how increasing isolationism, placing ourselves in little bubbles with people we know will agree with us, is bad - I know it's bad - but can feel like such a relief. And another examines the impact of a hate crime on a group of friends.

A: A lot of people comment on the fact that I wrote a book while working full time as a pediatrician and parenting two small children. I just like to be clear that I didn't do it alone. I had a lot of help. And, even so, I may suffocate someday under a pile of dirty laundry.