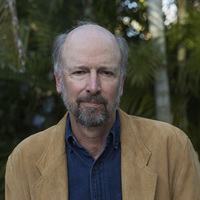 Thomas Reed is the author of the new novel Seeking Hyde, which features Robert Louis Stevenson and the creation of his classic work The Strange Case of Dr. Jekyll and Mr. Hyde. Reed's other books include The Transforming Draught: Jekyll and Hyde, Robert Louis Stevenson and the Victorian Alcohol Debate. He taught Victorian and medieval literature at Dickinson College, and now lives in Sarasota, Florida.

Q: You note that your new novel originated in a scholarly project you were working on. How did you end up writing Seeking Hyde?

A: It began with the idea of a screenplay about the way Jekyll and Hyde actually grew out of Stevenson’s personal and professional experiences.

There was some pretty dramatic material to work with: Stevenson’s life-long dependency on alcohol; his father’s outrage over his bohemian lifestyle; his guilt over contributing to the fatal alcoholism of a university chum; his bitter struggles with his willful wife over the direction of his career.

It would have ended up being a movie like Topsy-Turvy or Finding Neverland, about the origins of Gilbert and Sullivan’s Mikado and J. M. Barrie’s Peter Pan.

I showed my treatment to a friend in the British film production business and, while he liked the general idea—especially the characters and their dynamic—he felt that I hadn’t quite found the dramatic arc the story needed. I set the whole thing aside for a couple of years, but I couldn’t stop thinking about it.

It finally dawned on me that, if I were willing to bend the historical realities, I could give the story more of the dramatic shape and punch that it needed. My real-life point of departure was the fact that a play version of Jekyll and Hyde was, for a spell, blamed for inspiring Jack the Ripper.

I thought if I were willing to stretch the historical record and involve Stevenson in tracking Jack down, I could do a couple of interesting things.

First, I could fully tease out the irony that a book Stevenson meant as a warning against a certain kind of hypocritical self-indulgence should have been blamed for inspiring an even worse variety.

Second, I could watch Stevenson work through and resolve some of the guilt he felt not only for contributing to his alcoholic friend’s early death but also for creating a villain who could reasonably be thought to bring out villainy in others. Once I had that, I had the arc of Seeking Hyde. The rest was just filling in the blanks.

Q: What did you see as the right balance between the fictional and historical aspects of the novel? 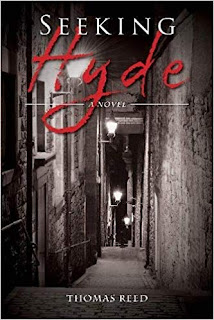 A: As you might gather, I was at first totally committed to the historical realities. I must have read six or eight Stevenson biographies and hundreds and hundreds of his letters, convinced that there was a great story in the bare facts.

Naturally, I had to invent scenes and dialogue that we can’t know ever transpired. It was frankly a little intimidating trying to put words into the mouth of a man who, along with Oscar Wilde, was one of Victorian Britain’s great conversationalists.

It was always a bit of a relief when I could literally let Stevenson speak for himself by tossing an actual letter into the narrative flow—that or parrot some of his recorded turns of phrase in my dialogues.

Once I gave myself permission to invent more freely, I still tried to take my Stevenson in directions that the real Stevenson had gone, even if it had been in different ways and circumstances.

He certainly never took a page out of The Adventures of Sherlock Holmes and stalked a serial killer through the alleys of the East End. In the last years of his life, though, he became very active in the politics of the South Seas, defending the rights of the indigenous populations against the abuses of the major European powers in ways that could have put his life at risk.

One of his last fictions actually involves a British protagonist who becomes disillusioned with Western exploitation of the native population and takes bold steps to end it.

I saw that moment when a newly activist author pens a tale of adventurous intervention as a kind of real-world paradigm for what my fictional Stevenson gets up to at the end of Seeking Hyde.

To put it all into one sentence, I usually tried hard to make the story adhere to the known record, and when I didn’t, I still wanted the invention to seem plausible and in line with the real man’s evolution. 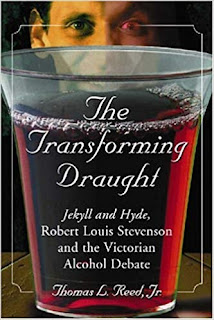 A: Stevenson’s original novel is, of course, about the search for Jekyll’s murderous other half. In some ways, my own title grew out of my long quest to explain where Jekyll and Hyde itself came from. Even in the scholarly book that I finished before I turned to Seeking Hyde, I was in essence seeking “Hyde’s” origins.

I also came to feel that virtually everything that Stevenson wrote up to 1886, when J&H was published, was what an artist would call a study for the final canvas.

Even his famous collection of children’s poems, A Child’s Garden of Verses, turns on tensions between what the adult world expects of young people and what they, by nature, truly are.

The poems never go all the way to the dark places that Stevenson’s novella explores, but they represent the same struggles between propriety and instinct, order and spontaneity, conscience and appetite. So, Stevenson as a writer was always “Seeking (or revealing) Hyde.”

Finally, in my book, once the play based on the novella is blamed for inspiring the Whitechapel murders, my Stevenson begins “Seeking [a] Hyde” in a very literal way.

Q: What accounts for the ongoing interest in Dr. Jekyll and Mr. Hyde?

A: Great question. Stevenson once wrote to J. M. Barrie, “People mayn’t be like their books. They are their books.” If I had a therapist, your question should probably be directed to her.

Seriously, though, I think that at the heart of my interest (or obsession?) is the fact that Stevenson created a core myth that speaks to virtually everyone who encounters it, even those (and I think there are many) who have never read the tale.

Everybody basically knows what it means to have a “Mr. Hyde” lurking there behind the public face we put on every morning.

What makes the story’s cultural role really interesting is the way the text uncovers the psychological or philosophical or theological assumptions a reader brings to it. It’s a kind of literary “ink blot.”

More liberal readers see him instead as an intrinsic part of our human makeup—perfectly natural and there for a reason—even if it may not be the most “civilized” side of us. It is social repression that turns him sour.

Pop nutritionists used to tell us, “You are what you eat.” Jekyll and Hyde shows us, “We are what we read into a story.” I think that, in many ways, Seeking Hyde explores just how thoroughly we can get trapped inside our own prior assumptions. A book like that is salutary in any age, and maybe especially now.

A: I’m currently working on two very different projects. The first is a re-treatment of the classic 14th-century Arthurian romance, Sir Gawain and the Green Knight. The other is the screenplay for a comedy that features a mature brother and sister who are charged with fulfilling their parents’ curious last wishes on a global stage.

A: Just that I think Benedict Cumberbatch would make a terrific Stevenson in a miniseries adaptation. Thank you, though, for the chance to talk about Seeking Hyde for what I hope will be an appreciative audience. I’ll always be happy to answer any questions they may have.