Marsha Forchuk Skrypuch is the author, with Van Ho, of the new children's book Too Young to Escape: A Vietnamese Girl Waits to be Reunited with Her Family. It connects to her book Adrift at Sea, which focuses on the same family; Van Ho, the youngest child in the family, was left behind when other relatives departed from Vietnam. Skrypuch lives in Brantford, Ontario, Canada.

Q: You note that the idea for Too Young to Escape emerged from your book Adrift at Sea. At what point did you decide to collaborate with Van Ho on her story?

A: My very first audience for Adrift at Sea were the primary students at the American International School of Bucharest. Here's a link with pics of that trip, including me reading to the Primaries.

The librarian, Stacey, had introduced the story just days before my arrival and let me know that her young students loved Tuan's [Van's brother's] story but were very concerned about Van and how she was doing now. So just before I left for the airport, Vanessa kindly sent me a smiling photo of herself with her husband and children. I shared it with the students and they were relieved!

During presentations in Canada over the next months, this response was repeated, especially when I presented Adrift at Sea to Primaries. Older students were not as worried, but young kids could see themselves in Van.

I asked Van if she would agree to do a book about her childhood with me. It took her a bit of time to get used to the idea and to agree -- and I'm so glad that she did. 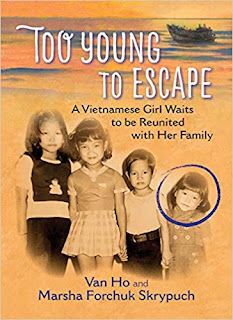 Q: Adrift at Sea is a picture book while Too Young to Escape is not. How did you choose the format for this book?

A: Too Young To Escape is an introspective journey, about the feelings of a young girl who is without her family, with her emotional response being as important as the actions themselves. A picture book couldn't convey that introspection in the same way as a chapter book can.

My biggest challenge was to write it as simply as possible, yet to convey the complex feelings that Van experiences.

With Adrift at Sea, Brian Deines' oil paintings beautifully captured the physical nature of that journey -- the vastness of the ocean and just how small and vulnerable their boat was. While Tuan's journey was also an emotional one, it wasn't introspective in the way that Van's was.

Q: How did you and Van Ho work together on the book?

A: We initially spoke on the phone, and then we met for one giant-long interview face-to-face. After that, as I wrote each chapter, I would email it to Van and she would read it and give me feedback for tweaking. She also would send it to her siblings and parents so they could comment too. 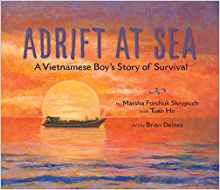 Once, Tuan was so caught up in reading it that he totally missed his subway stop so his wife had to pile their daughters into the car and go get him!

There were also many late-night phone calls when I had written myself into a corner!

Q: Did you need to do additional research to write Too Young to Escape?

A: Yes. For basic things like the interior of her house, the interior of the Buddhist Temple, the route she took to get to school, the school yard and interior of the classroom. These are visuals that I needed for the story, but a 4-year-old tends not to observe specific details like that.

So I would find various historical images and street views and show them to her and that would tweak her memory and she was able to show me what was the same or different from what I was showing her so I could visualize and then write the scene. 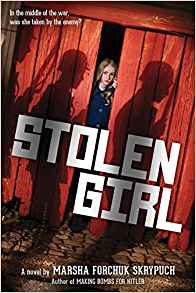 A: I'm in the midst of writing books 2 and 3 of my second WWII trilogy.

A: Van's story is of course a very personal one for her and her family and I am so grateful that she allowed me and readers in. She has given us all the opportunity to feel what it's like for a very young child to be separated from parents because of political turmoil.

--Interview with Deborah Kalb. Here's a previous Q&A with Marsha Forchuk Skrypuch.
Posted by Deborah Kalb at 6:55 AM