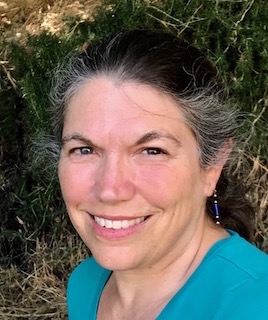 Lynn Fulton is the author of the new children's picture book She Made a Monster: How Mary Shelley Created Frankenstein. She lives in the San Francisco Bay Area.

Q: Why did you decide to write a picture book about Mary Shelley and Frankenstein?

A: When I was a graduate instructor working on my Ph.D., I used to teach Frankenstein to my freshman composition students. But the idea for the picture book didn’t come to me until 20 years later, after I’d left academia and written three novels for adults, all of which failed to get published.

So for about 10 years I gave up on writing, but then I started to miss it and longed to go back to it… if I could only find a story I wanted to tell.

So around this time, to prepare for a book group discussion, I was re-reading Mary Shelley’s Introduction to the 1831 edition, where she tells the story of how she thought of Frankenstein. I started thinking about what a great story that was, and I wondered whether I could turn it into a picture book for kids.

It’s a story about the power of the imagination, about persistence, and about the need to express the idea that’s in you. But it’s also a spooky monster story, so I thought those two elements together—the empowering themes along with the exciting story—could really appeal to kids. And then in thinking about telling how Mary found her story, I found mine, too. 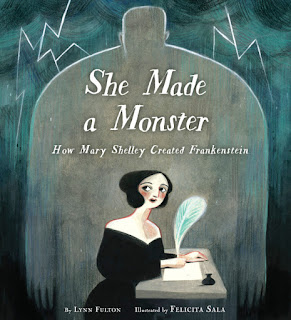 Q: How much knowledge about Frankenstein do you expect kids have when coming to your book?

A: I think all but the youngest kids have at least some idea of the pop culture version of Frankenstein—a green monster with bolts in his neck who goes “Aaaargh” and stomps around.

And older kids might know that the monster was built out of dead bodies by a "mad scientist” type. They might also have picked up on the idea that Victor Frankenstein used electricity to animate the monster.

But I don’t think many of them know that this monster originally came from a book at all, let alone a 200-year-old book by a 19-year old woman.

So I thought it would be fun to let kids in on that fact, and also introduce them to the idea that Shelley's novel is very different from most movies or TV shows or cartoons they’ve seen about Frankenstein. They don’t know about a Frankenstein’s monster that is articulate, well-read, and sympathetic.

Q: What do you think Felicita Sala's illustrations add to the book?

A: I think the illustrations add a wonderfully somber, spooky tone to the story. And I love the way the pictures pull in references to familiar Hollywood versions of Frankenstein—like the picture of the laboratory equipment, which seems right out of a movie—while at the same time providing great concrete images for the more abstract ideas in the book.

Two of my favorites are the picture of Mary Wollstonecraft all alone, surrounded by disapproving men; and the picture of the night and storm outside while the men inside are talking about conquering nature.

The first one really shows how unafraid Mary Wollstonecraft was, how true to herself because she is not even looking at the men who are all looking sideways at her; and the second adds a lovely note of irony, like nature laughing at the humans who think they can conquer her.

Q: What do you hope kids take away from the book, and what do you see as Mary Shelley's legacy 200 years after the publication of Frankenstein?

A: I hope kids can identify with Mary’s search for a way to express herself, to find her story.

She wants to be a writer but she wonders about her powers, especially as compared to these ambitious and intimidating men in her circle. But she draws on her own ideas and the influences in her life, and it all comes together into this unique gift that she has to give to the world.

So I hope they’ll find some resonance in Mary’s story. I hope they’ll learn not to be intimidated by people around them who seem to know more or have more. And of course I also want to remind kids of that time when women did not have a voice, and teach them a bit about Mary Wollstonecraft and her pioneering feminism.

As for Mary Shelley’s legacy today, I would agree with those who see her as a founder of modern science fiction. But I also think the message of Frankenstein is more subtle than a distrust of science or a warning against playing God. I think she’s saying, be careful what you do with science and make sure you take responsibility for it.

Victor abandons his creature—his “child”—and the result is tragic. The warning is not so much against creating life, but against not taking responsibility for it. As I imagine Mary asking herself, “What would happen to that lifeless matter once someone had given it life?”

A: I’m working on a science fiction novel for teens about a future where humans have traded the ability to reproduce for extreme longevity. They can live for centuries but they don’t have children or families.

I’ve been thinking about this for two years—and it took me almost that long to realize it’s kind of like another version of Frankenstein! That’s because it explores some consequences of creating life artificially, of messing around with Nature.

A: Only that I am by no means an expert on Frankenstein or on Mary Shelley—and if you want to learn more about her and her novel, there are oodles of fascinating books out there! And I really appreciate the opportunity to answer these questions!