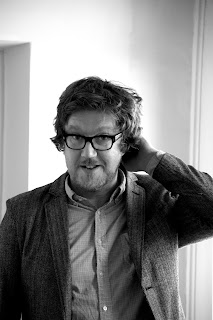 Ged Adamson is the author and illustrator of the new children's picture book Douglas, You're a Genius!, a sequel to Douglas, You Need Glasses!. His other books include Ava and the Rainbow (Who Stayed) and Shark Dog!. He lives in London.

Q: How did you come up with the idea for Douglas, You're a Genius!?

A: I was initially thinking about an idea where Douglas and Nancy are in competition with each other. There’s some objective and they disagree about how to achieve it. They try out their own plans and it gets crazy.

But then I thought what if it’s a bit more co-operative and there’s something they want to find out? The idea of what’s on the other side of the fence came to me. It’s also a symbolic thing in a way and it’s about reaching out instead of putting up barriers. Quite topical really! 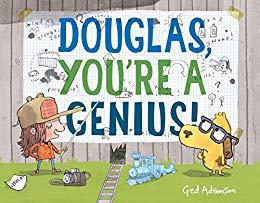 When Douglas and Nancy finally meet the kids from the other side, they see that they’re just like them and they all create something wonderful together.

Q: Did you know when you wrote about Douglas and Nancy in


Douglas, You Need Glasses! that you'd be doing a sequel?

A: I didn’t at all! At that time it was all about seeing how the first book went down. The response was really positive from a lot of people. Especially children with glasses and their parents, which was lovely to see.

It was so great to get asked to do this new one. I love Douglas and Nancy, and knowing I would be doing a second book with these two was very exciting. 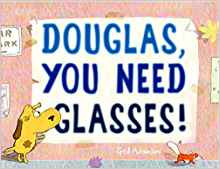 A: I’ve mentioned already two of the main messages but here’s a few more things:

That it’s very good to be curious about stuff that’s a little outside your immediate environment and experience.

That solving problems can be fun and can involve silliness and creativity!
Nancy gets a bit bossy in this story and doesn’t let Douglas have his say - so I hope kids will see that it’s important to let everyone contribute and be heard. 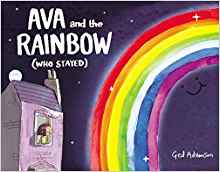 And that sometimes the simplest solutions are best!

Q: In our previous interview, we talked about your writing and illustrating process. What was it like this time around?

A: It was different in that this new story has a slightly more surreal quality than the first. The idea that there’s this huge fence at the bottom of the garden and the two characters (whose back yard it is) have no idea what’s on the other side is pretty dream-like!

Douglas You’re A Genius! is more like an allegory whereas the first book is more straightforward in its message. 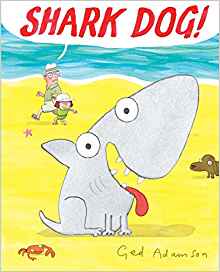 The illustration side of things was more of a challenge this time around. For most of the story, Douglas and Nancy are standing on a grass lawn next to a fence. So I had to make sure there was lots of variety, fun and movement in the images--hope I managed it!

A: I’m working on a book about a fox who finds something interesting buried in the snow. The great thing is I’m doing this one with the Douglas publishers, Schwartz and Wade, so I’m very excited about it. The illustration style is slightly different to the Douglas books - it’s been a lot of fun so far. It will be out next year.

A: For more Douglas, foxes and other silly stuff, check out my instagram.

--Interview with Deborah Kalb. Here's a previous Q&A with Ged Adamson.
Posted by Deborah Kalb at 7:10 AM