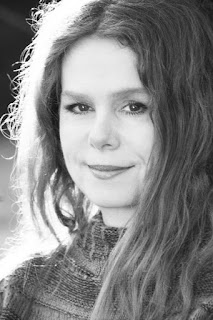 Vivian Schilling is the author of the newly reissued novel Quietus. She also has written the novel Sacred Prey. In addition, she is a filmmaker. She lives in Los Angeles and in the Ozarks.

Q: How did you come up with the idea for Quietus, and for your character Kylie?

A: After narrowly escaping death in a car accident when I was 18, I had my first harrowing brush with mortality. With the subsequent and sudden loss of my parents several years later, death became my biggest adversary, one I struggled desperately to understand and to conceptualize.

With lingering questions about my own inexplicable survival and the abrupt loss of those I loved most, I began a decade long search for answers. The concept for Quietus was born out of that journey.

Much of my inspiration for Kylie’s character came from visiting Boston, her birthplace and home. By piecing together her day-to-day life, her neighborhood, and the homes of her loved ones, the tapestry of her life and character unfolded before me.

Ultimately, Kylie proved herself to be a strong and resourceful force in the lives around her, an intelligent protagonist, one who wasn’t afraid to search out and fight for the truths, even when they led to the darkest part of her own mind. 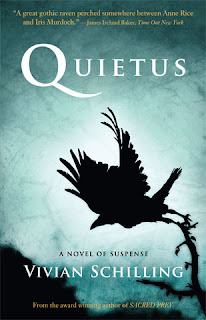 Q: You clearly did a great deal of research for this book, on a wide range of topics. What did you discover that surprised you most?

A: Unlike today, where you can find a wealth of information at your fingertips, I did most of my research before the internet became a viable source of information. While searching for esoteric materials, I had the actual feel of sifting through old texts and archives in libraries searching for clues to support my mythology for Quietus.

One night, after what felt like an endless search for the missing link to pull it together, I stumbled upon a book of apocrypha that had fallen out of favor in the 4th century—an apocalyptic foray into the afterworld that made an important element of my story fall into place.

On a larger scope, my deepest surprise was the depth of my love for art history, anthropology, mythology, ancient customs and rituals, anything and everything that could lend insight into man’s philosophical and spiritual journey. I was stunned by the wealth of artifacts and written resources from throughout the ages that explored death and man’s quest for understanding.

Q: One of the reviews of Quietus compared it to Anne Rice, Iris Murdoch, Carl Jung, and Mary Shelley. What do you think of that?

A: I am, of course, delighted and honored to be in such interesting company. Those are all bold and deep thinkers whose works have been transformative in one aspect or another. 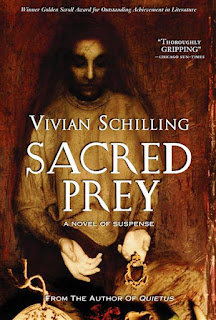 Like many writers I don’t often read reviews, but when I do, I try not to give too much weight to them. But I don’t know any writer who wouldn’t be amused to be likened to “the bastard daughter of Carl Jung and Mary Wollstonecraft Shelley.”

The review definitely piqued my curiosity and challenged me to identify the elements that had led James Ireland Baker to put these names alongside my work. I found his reasoning clever and insightful, especially when I realized that on an analytical level, he understood my work even better than I had myself. It was amusing, flattering and intriguing all rolled into one and felt a bit like going in front of a psychoanalyst.

Q: As a filmmaker and novelist, how do the two work together for you?

A: Knowing that I can turn to either profession to bring a story to life is a comforting feeling.

On the business side, the two professions often intersect when it comes to the intellectual property rights. I currently have a screenplay set in 1899 that I completed a few years back that I have shelved until the completion of my third novel.

When I’m ready, I can either pitch it to the studios for a film, or I can adapt it into my fourth novel and then in turn endeavor to sell the film rights. Whichever direction I ultimately take the material could determine how I spend the following one or two years of my life—that of a novelist off in the mountains or a filmmaker in the thick of a production.

At this point in my life, writing novels is my main passion, but I still remain open to the occasional film project. Film gives a break from the complete immersion of a novel. Yet after the stress and collaborations of a film, writing is like a coming home, back to my own vision and path of self-discovery.

A: I am focusing solely on my third novel which is a period piece. I am happily spending a lot of time in the mountains, working on its completion.

A: That I appreciate this interview. Any time my voice can rise above the cacophony of amazing talent out there, I can’t help but be grateful. So thank you. It’s been fun chatting and exploring these thoughts with you.