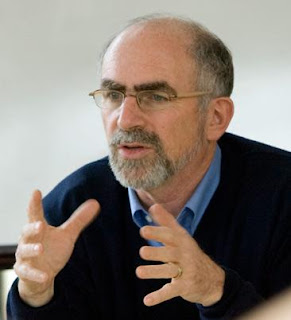 Bruce W. Jentleson is the author of the new book The Peacemakers: Leadership Lessons from Twentieth-Century Statesmanship. His other books include The End of Arrogance and With Friends Like These. He is a professor of public policy and political science at Duke University.

Q: You note that part of the inspiration for your new book was a group of students you taught several decades ago. How did the concept for the book change over the years?

A: I’d say in three main ways. One was wrestling with the classic question of whether leaders make history or history makes leaders.

As someone who has been in both the academic and policy-political worlds, the one tending to focus on broad abstract forces and the other apt to get too caught up in personalities, I’ve long thought about where the balance point lies.

In the introductory chapter, I frame this as a “3 Cs” dynamic: recognizing the mix of constraints and conducive conditions that any leader faces while still leaving a crucial domain of choice in which who the leader is can make a big difference.

As a lightening touch, and reflecting my lifelong love of baseball, I call this “Statesmanship Moneyball,” converting the wins-against-replacement- player (WARP) stat to statesman-against-replacement-leader (SARL) to get at unique leadership qualities and choices that were unlikely to have been made by another leader facing the same constraints-conducive conditions mix.

Second is the criteria of impact had, not just position held. I started out thinking largely about presidents and prime ministers, secretaries of state and ministers of foreign affairs.

But the more I did the research, the more I also saw how important were leaders from international institutions, social movements and nongovernmental organizations (NGOs) who did for peace and justice what governments were unable – or unwilling – to do. Indeed, such leaders are even more important here in the 21st century than they were in the 20th century.

Third was how much peace needed to be achieved to qualify a peacemaker. A book about full and lasting success would, sadly, be a very short book. At one point I was ready to ditch the project since there were so few perfect-pure cases. 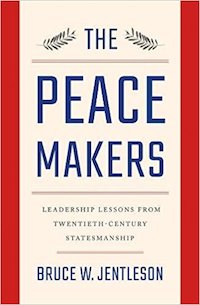 But I continued to believe that there was much to be learned from critical junctures at which breakthroughs were made for significant even if incomplete progress on issues long thought intractable.

I also decided that inclusion was about particular peacemaking roles not leaders’ overall foreign policies, as for example with Henry Kissinger and his co-statesmanship with Zhou Enlai on the 1971-72 U.S.-China opening (Chapter 1), notwithstanding his role in the Vietnam War and other issues.

Q: One of the “peacemakers” you discuss is Mikhail Gorbachev. How would you compare relations between the U.S. and the Soviet Union during his time and U.S.-Russia relations today?

A: No question there’s been backsliding and backlash rather than continuation of the breakthroughs which made Gorbachev not only a peacemaker in my view but someone who, as his latest biographer William Taubman puts it, “almost singlehandedly changed his country and the world” (Chapter 2).

As fraught as today’s situations are, those who call it a new Cold War go way too far. Whatever else the tensions, they are not global, they are not as intensely ideological and they are not casting the specter of nuclear war.

I lay out a path forward that would well serve both countries’ interests – while also conveying great concern that the Trump-Putin combination of both being thin-skinned as well as bullies can all too quickly ratchet escalation to very dangerous levels.

Q: Another person you include is Aung San Suu Kyi, whose story you describe as “a cautionary tale.” Why did you include her, given the current situation with the Rohingya in Myanmar?

A: My editor and I wrestled with this just before finalizing the manuscript last fall as the Rohingya crisis escalated to the point of genocide. Could someone who was at minimum complicit in these atrocities be included in a book called “peacemakers”? Should we pull the chapter? 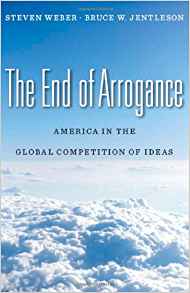 Two reasons why we didn’t. One is that the ending of 54 years of military dictatorship and the initial transition to democracy would not have been possible without the leadership Aung San Suu Kyi provided – and that only she could have provided, that high “SARL” ranking --- in the 1988-2015 period.

Second is that as with so many other of our profiles, there is much to be learned from their mixes of flaws and failings. Of all the commentaries, I was especially struck by New York Times columnist Roger Cohen’s column avoiding casting her as saint or pillorying her as ogre and leaving open that she may still be “the best hope of completing the task [of] completing an unfinished nation.”

So we kept the chapter, titled it “Aung San Suu Kyi: A Cautionary Tale,” addressed both her achievements and failures, and drew out both sets of lessons.

Q: What impact do you see the Trump administration having on global interactions?

A: I started the book pre-Trump. He, and Putin and all too many others, have made constructive statesmanship all the more urgent. I deal most directly with Trump (and Putin and Xi Jinping) in the Major Power Rivalries section, drawing lessons from Kissinger-Zhou Enlai and Gorbachev and Reagan and others and the end of the Cold War.

As throughout the book I make the case for what could be done, not necessarily what will be done. Indeed, I end that section stressing my wariness especially about Trump (and I’ve written on my deep concerns about Trump elsewhere, for example, 2016 and 2017 articles in Global Asia and various missives on Twitter @BWJ777). 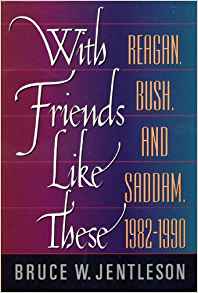 I start the book with an epigram from Isaiah Berlin that “At crucial moments, at turning points . . .  individuals and their decisions and acts . . . can determine the course of history.” In so many ways we are at one of those crucial moments at which leaders will determine the next course history takes – for the worse or for the better.

A: I wrote the book very much as a trade book, not just for the academic-wonk world but for general interest readers. We’ve mused on book clubs having their own discussions of who would you include as a 20th century peacemaker. If I was a millennial I may have created a social media game!

I am giving talks on the book in various cities at think tanks, universities, bookstores, general interest groups. I believe in the book and am committed to engaging with interested readers as much as possible.

At the same time, I’m continuing my work on some pressing foreign policy issues.

I have an article on U.S. policy in the Middle East in Order from Ashes: New Foundations for Security in the Middle East, published in March by The Century Foundation and the Brookings Institution. Also one more broadly on the 21st Century world, "The Liberal Order Isn't Coming Back: What Next?", in Democracy: Journal of Ideas.

I’ll be working more on those broad international order issues which acknowledge the ways that Trump and Brexit and the like are effects of deeper dynamics that would have been there even if the U.S. presidential election/British referendum had come out differently.

Within that I’m thinking of another book that puts the current debates about U.S. foreign policy in historical perspective, along the lines of a blog I wrote on the eve of the Trump presidency, but focusing not just on our interests but our national self-concept, "Apart, Atop, Amidst: America in the World" – I’m in early stages of thinking on this, so any thoughts welcome!

I also continue to co-direct the Bridging the Gap Program, with a group of fabulous colleagues, geared to better connecting the academic and policy worlds. And at Duke my teaching, mentoring and other responsibilities remain central, not least for the privilege of working with students in the early stages of their own intellectual and professional development.

A: I could never say enough about my family – and readers will find more gratitude in the Acknowledgments.

“[Baseball] breaks your heart. It is designed to break your heart. The game begins in the spring, when everything else begins again, and it blossoms in the summer, filling the afternoons and evenings, and then as soon as the chill rains come, it stops and leaves you to face the fall all alone. You count on it, rely on it to buffer the passage of time, to keep the memory of sunshine and high skies alive, and then just when the days are all twilight, when you need it most, it stops.”