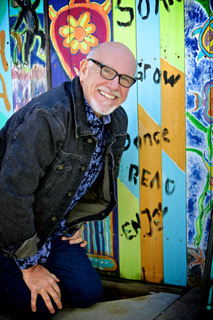 Rob Sanders is the author of the new children's picture book Pride: The Story of Harvey Milk and the Rainbow Flag. His other books include Outer Space Bedtime Race and Cowboy Christmas. He is an elementary school teacher, and he lives in Florida.

Q: Why did you decide to write a picture book about Harvey Milk and the Rainbow Flag?

A: Picture books are my thing, and I’ve been writing fiction books for a few years now. I’ve always been interested in nonfiction writing, so it was a natural progression to move into that kind of picture book writing.

I was inspired to write Pride: The Story of Harvey Milk and the Rainbow Flag on June 26, 2015, when the Supreme Court ruled on marriage equality. It was a great day for those of us in the LGBTQIA community, and a step forward in equality for everyone.

As I watched news coverage that night, I saw landmarks around the world lighted in colors of the rainbow. The image of the White House glowing with six colorful stripes stands out in my memory.

I immediately knew that this was a story that children needed to hear and learn about. This history needed to be part of their history. I knew I wanted kids to know about the origin, meaning, and significance of this important symbol of equality, pride, hope, and love.

Q: What kind of research did you need to do to write the book, and what do you hope kids take away from the story? 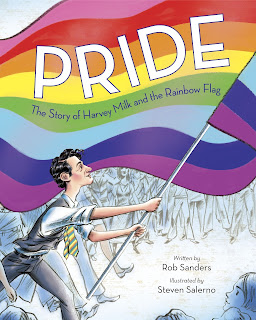 A: I wrote the first draft of Pride that night in June 2015. This was a heart story and it flowed out through my fingers to the keyboard and onto the screen.

Of course, a first draft does not a picture book make—especially a nonfiction picture book. My research began in earnest the next day. I used many sources: news footage, magazines, newspapers, interviews, and books—such as The Mayor of Castro Street by Randy Shilts.

One resource leads you to another, so the research continued and continued, even after the book was acquired. My editor, Michael Joosten, was actually able to score an interview that I had tried to set up. Michael was able to enlist Gilbert Baker—the designer of the Pride Flag—to read and comment on the manuscript. Gilbert’s firsthand account and his notes on the manuscript took the piece to a higher level.

Q: What do you think Steven Salerno’s illustrations add to the book?

I was immediately taken with Steven’s illustrations, even in the early sketch stages. His work was filled with action and life from the very beginning. Then I saw the illustrations in color. One word comes to mind—WOW! 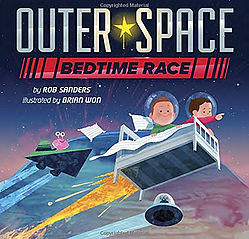 Steven’s work is more than I could have envisioned on my own, and his illustrations have taken my story and made it into a picture book. He didn’t just illustrate scenes from the text and the events of history, he brought life and a deeper meaning to the text and those events.

Q: How does your experience as a teacher inform your writing?

A: Many children’s picture book authors have backgrounds in the classroom or in libraries. I think being around kids every day helps you learn a bit about their preferences.

I see what books kids pick up and what they pass by. I’ve learned what makes them laugh. I know they’re usually not afraid of a text that makes them feel something. I’ve discovered they’re interested in nonfiction. I’m also able to sometimes identify where there’s a hole in the marketplace—a topic that’s not yet been written about or needs more written about it. 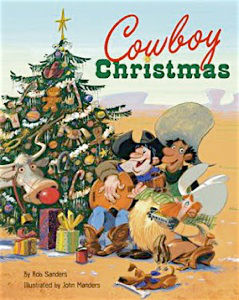 My students encourage me on my writing journey. About 10 years ago some of my students convinced me to pursue my picture-book writing dreams. (They actually sent me on a guilt-trip for not writing, but that’s another story for another time.) Now students are interested to know what I’m working on, like to see books in various stages of production, and celebrate each new release with me.

In September, my second nonfiction picture book comes out. Peaceful Fights for Equal Rights (Simon & Schuster) is a lyrical, rhythmic primer of ways to peacefully protest.

Next April Random House will release Stonewall: A Building. An Uprising. A Revolution, the first picture book about the Stonewall Uprising. That book is unique because it’s told from the perspective of the buildings who witnessed history for over a century, and then became part of history.

Then in the Fall of 2019 my next fiction picture book—Ball and Balloon—will be released by Simon & Schuster. In other words, I have a lot going on!

A: Harvey Milk once said, “You have to give them hope. Hope for a better world. Hope for a better tomorrow . . .” Harvey was speaking about lesbian and gay teens in San Francisco in the mid-‘70s, but the same is true for the children for whom we write.

We need to give them hope—through fiction and nonfiction. We also need to help them learn about the world and be ready to respond to the world with hope, love, and acceptance. It’s a big job, but together we can accomplish it.