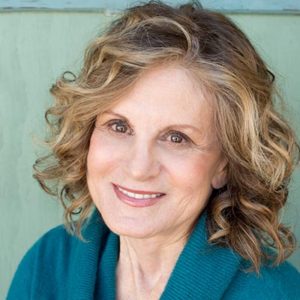 Nisha Zenoff is the author of the book The Unspeakable Loss: How Do You Live After a Child Dies?. She is a psychotherapist, grief counselor, and teacher, and she lives in Marin County, California.

A: In 1980 my son Victor, my oldest son, died in a hiking accident in Yosemite. I was already a grief counselor and a dance movement therapist. I found that nothing I knew professionally did anything to help with the devastation, the shattering of my heart.

I’m blessed, I had a husband and two other beautiful children, but at the time I didn’t think I could live. There are no guidelines for how you live the rest of your life with a broken heart.

I vowed that if I could find the answers, I would share them with as many bereaved people as possible. I reached out to mothers who had experienced the sudden death of their child. They are the experts.

I didn’t intend to write a book. But after I did my doctoral dissertation, I interviewed many mothers, and their words were like jewels to me. I couldn’t believe their meaningful words.

People were telling me it was unusual at the time to have your dissertation become a book but why don’t you try. I spent about 10 years, and I said I don’t know how the book should end. Or the title. I could only think of, "The Death of a Child Sucks."

I put the manuscript, 1,500 pages of my own story and my research, and put it in storage.

Three years ago, I had a powerful dream, a man’s voice saying to take the manuscript out of storage and get it published now. I was about to be 75. My husband and I went to the storage, and found the box with the research and the manuscript papers. I stared at it for two weeks. I hadn’t worked on the book for 15 years.

I finally opened it up, and looked in the box, and there were all the quotes from the mothers, the information—it was as alive as it had been, and the book started writing itself. I couldn’t get it to stop.

During the last three years, I interviewed 46 other people—fathers, grandparents, siblings. In meditation one day, I had a meditation that the title came to me. I knew it was going to happen. 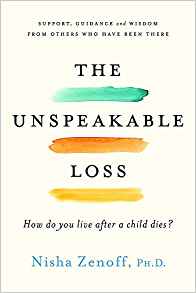 Q: In the book, you share your own experiences after the loss of your son. What do you hope readers absorb from the tragedy faced by your own family?

A: One of the things I realized is that [when I first worked on the book] I hadn’t lived long enough to know how the book should end. Now it will be 38 years since Victor died.

One of the first things I would like readers to know is that the book is for anyone who’s lost anyone they loved. We do not have to grieve alone. Reaching out to other people who have faced unspeakable loss is so important.

More important than anything, what I know from my own experience and other people’s, is that even though the physical body dies and our challenge is to live without the physical body, our love does not die, and will continue as long as we are alive.

So many people think if they do not stay in touch with their pain, they will love touch with their loved one. And that’s not what’s happening. Our relationship transforms--there’s the spirit, the soul, memory, dreams, that keep us connected to our loved ones.

Another thing is that grief is not a contagious disease, it’s not a pathology, it’s not a condition that needs to be fixed or recovered from. It is part of a process, a response to the loss of someone we no longer have. The grief is the engine for healing.

Grief is terrifying—it can feel like we have a flu. On every level of our being, grief can affect us. To not fight against it, Sheryl Sandberg after her husband died said to lean into the grief. What that means to me is not that you like it, but that you surrender to a process you have to go through to get through it.

Grief is something we have to almost embrace. Especially with the death of a child, there’s no timeline. It’s a lifelong experience. It changes. It doesn’t go away, but it gets softer. It’s like sea glass, it gets softer over the years, and grief is the same way.

One of the reasons I finally wanted to write the book is to bridge the gap between the bereaved and the non-bereaved, to take some of the stigma away from having a child die.

When it is suicide or murder, there is a stigma. Having a child die is a stigma—no one wants to mention it. I wanted to take it out of the closet. Children are dying all over the world. In so many different ways, at so many different ages. At whatever age. Even if the child is 40, 50, 60.

A: It was incredible and surprising to me—when I first started, and I showed it to people in the industry, they said, nobody wants to read about grief. That’s not the reaction I’ve gotten to the book. It’s been overwhelmingly positive. People have embraced the book.

It’s helped bring the idea of a child’s death out of the closet. When I was writing the book, a friend called me one day, and whispered, Did you know Melissa had a child die? I said, I didn’t, but why are we whispering? She said, I don’t want to gossip. I said, telling me a child died is not gossip.

That’s part of why I had “the unspeakable” [as part of the title]. Bereaved parents and grandparents love to speak about their child. Other people are so afraid: I don’t want to bring up their pain. Bereaved parents will tell you that the pain is already there.

The Compassionate Friends is a nondenominational organization started by an Anglican priest in England in the ‘70s…An American couple in Florida had a child die in a train accident. The mother was suicidally depressed. She heard about the priest, Simon Stephens, and he came and stayed with them.

That began The Compassionate Friends, 41 years ago. Now there are 600 chapters across the country. I had the honor to be one of their keynote speakers. It’s a very important organization. Group support is not for everyone, but grief support is.

Another organization, Open To Hope, was started by Gloria Horsley and her daughter Heidi Horsley, when Gloria’s son Scott died.

A: The only other book I thought I might do is a book on poetry from parents. Their words are such gems. I put them into poetry form. That’s one of my wishes, to have that book come out. Now I’m focused on The Unspeakable Loss, and getting it out in the world.

A: The book is written in a question and answer format so people can read the book by picking it up and skimming it, looking for a subject they are interested in at the moment. It’s something that can be given [to someone who is bereaved] a week or a day after their child dies, or years later.

Often we have grief brain. I wanted it to be something people could pick up according to where they are in the process.

Also I think of the book not as my book but as our book. There are so many experiences and wisdom from other parents and families. It’s a collaboration of other people wanting to help.

I narrated the book—it is on all the Audible sites. It is six hours when recorded….