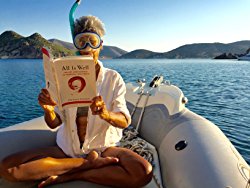 Marilynn Preston is the author of the book All Is Well: The Art (and Science) of Personal Well-Being. She is also the author of "Energy Express," the longest-running syndicated fitness column in the U.S.

A: I’m with Creators, and Creators asked about a book, and I was very reluctant—I’m on the receiving end of so many books about fitness and health. But I looked back at my 40-plus years in the field, and thought, I do have something to say.

My reader gets so confused--there’s so much conflicting information out there. And I wanted to bring some humor to it. Well-being is not about shaming. People start to go down that path. It’s shifting toward a more positive approach to your well-being. What you’re doing right, working at your own pace. The book is non-judgmental.

Personal well-being is very personal. There’s so much focus on how much do you weigh, can you run a marathon? The reader is somewhere on the path. What does that mean to you?...Some people can change, and make a positive change in their life. It could be losing weight, getting better at tennis, spending more time with your children.

People don’t change because other people tell them to. That includes their doctor or other experts. It has to come from them[selves]. Then the focus is on the positive, not the negative.

That underlies every chapter in the book—encouraging people to focus on the things they’re doing right, the things they enjoy. Forty years ago, that wasn’t talked about. You can shift your mindset, and when you do that, other things associated with well-being begin to shift in a positive direction.

Q: You begin your book with an anecdote from 1972. Why did you choose to begin here?

A: It’s a true story of how I started the column. It’s now America’s longest-running fitness column. My husband and I decided to take our bikes to France. I took myself to a local park—Am I in shape for this?—it was like a near-death experience!

We went on the trip, and had a wonderful time, but when I came back I thought I wanted to understand about being fit. The Chicago Tribune would fly me to California, where holistic health was just happening.

Now all these years later, it’s almost mainstream. [But] traditional Western doctors are still reluctant to talk to patients about the mind-body connection. They know little about nutrition. It’s shockingly slow progress. But I’m an optimist. The services are out there. 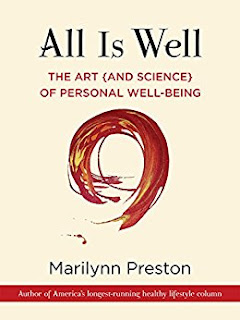 Once I was accumulating all this information, I saw that all the medical columns were about pills, hemorrhoids, there was nothing about prevention or fitness. I went to the paper and said I had an idea for a new kind of column. I found a sports medicine doctor to work with me. It got picked up by the Tribune first and quickly went into syndication…

Q: You divide the book into four sections corresponding to the four seasons. How did you decide to organize it this way?

A: One of the things that’s underplayed for people interested in personal well-being is how important the connection to nature is. The four seasons are us. As the seasons change, so can we. In spring, it’s a time of new growth and development for all things, including us...

What’s in the air, what we’re sensing helps the body rejuvenate. It’s a reminder to people that time spent in nature is a plus. You don’t have to be in a gym grunting it out. People get confused about what they should be doing.

Q: You write, “We are living in a Trumpian world. Personal well-being is under assault like never before.” What impact do you think the current political situation has had on people’s health, and what are some of your suggestions for dealing with it?

A: One thing, when I look at the Trumpian world we’re in, which is creating a lot of stress, personal well-being is a common-ground issue between the red states and the blue states.

I have a family house in the Northwoods of Wisconsin. It’s a red state, and the house is in a red part of the red state. My first stop is to drive 13 miles to the health food shop. Last summer it had tripled in size. It’s not just organic beef, but essential oils—there’s a much broader interest. I talked to a few people—the best explanation [for the increased interest] was that “people are sick and tired of being sick and tired.”

There’s a chapter in the book, Be Your Own Uncle Sam. We are not well-served by government agencies. We all know the system is broken. I don’t take the Democratic or Republican side, but I take the side of the health care consumer.

I spend time in Greece, and have friends who are Swedish, Dutch, German, French, Italian, Greek. None of them stress out about health care. They have it as part of their lives, like the police or roads. No one worries about going bankrupt [because of it].

We are at a time of inevitable reform. In all the countries around us, health care is free enough to take the stress out of it. There’s a real opportunity here to see a necessary shift—not five years from now, I mean tomorrow.

But being your own Uncle Sam is the call of the day to the Trumpian world. We see the system compromising water, air, regulations. We have to take better care of ourselves, mentally and physically. Taking [time] from our day to destress and relax.

There are all those things we hear about—but what’s going to engage us to bring it into our lives? And we have the science behind it—there’s the fight or flight, we are hard-wired to be anxious. That’s how we survived.

What we don’t hear enough about is the parasympathetic nerve system—relaxation and digestion—we need to be in balance. There’s the red zone and the green zone. The more we do it, even for tiny amounts of time, neural pathways grow. That’s why the first chapter in the book is Link Mind and Body…

Q: Will you work on another book or focus on your column?

A: I really like the way the book came out. Creators published it in late April [of last year] and by August it was an Amazon best-seller. I’m so grateful for it.

Publishing is so different now. I had a book come out in 1986 in the traditional way. Now [the new book] lives and builds and finds an audience thanks to social media…I’m spending time talking to people about personal well-being and this book. It’s easy to engage people on this…

A: There are a couple of practical things that can really be a big shift on well-being. One is using a standing desk. The truth is out that we do sit too much, and that costs us in digestion and energy. I work at a standing desk. It’s very helpful.

Another is when people look at their longevity and wellness, people say exercise is important. That’s true. [It’s also important to look at] smart eating, eating real foods, the dangers of processed foods. The fact that processed foods are still allowed to get away with subtle poisoning is astounding to me.

[And] what people don’t realize is the importance of human interaction. It’s not the accumulation of friends on Facebook, but taking time in the day to have human interactions with loved ones in the home, or people you meet on the street or in the grocery store. How you interact is important for your well-being and health. It has been undersold, and yet I choose to see people waking up all over the country [to this idea].

I’ve done about 10 events for the book, and I try to mix it up in terms of ages. Everyone is saying there’s too much technology, but what do I do? They’re fighting something real—it requires you to put your values out there. It requires introspection and positive action. It’s so important to be part of a community that has those values—it seems to be the key to making positive change.

--Interview with Deborah Kalb. Marilynn Preston will be appearing in conversation with fellow Creators columnist Jamie Stiehm on May 2 at Busboys and Poets in Takoma Park, DC.
Posted by Deborah Kalb at 7:04 AM