Q: How did the two of you end up writing this picture book together, and can you describe how you divided up the writing?

DB: Years ago, I had a friend who lived in a tiny apartment in a big old barn. In that barn she unearthed treasures, one of which was a ragged paperback copy of Animals Should Definitely Not Wear Clothing.

The book sparked the question: What else should animals not do? Answer: Porcupines should not blow up balloons.

The idea morphed into a birthday party with familiar zoo animals. I submitted and then revised the story a million times (well, maybe only several hundred) but I couldn't sell it.

All the versions sat in a dark drawer for nearly 15 years until one day I asked myself: What genre never gets old? Answer: Dinosaurs!

I tried rewriting it several ways, including with sound effects (burp, crunch, snort...). But the story still wasn’t coming together so I brought it to my critique group. Enter Matt....

MFE: We were part of the same SCBWI critique group, when Deb approached me with an idea she had for a book. They were some lines about dinosaurs causing chaos that she had revised from a previously written manuscript that she hadn't been able to sell, and she wasn't sure what to do with these new lines.

Knowing that I write almost exclusively in rhyme, I suppose she thought I might have a phenomenal idea - which, as it turns out...I didn't.

So the lines sat beside my computer for a couple months until one day something hit me and I banged out several lines of a potential manuscript. I worked on it for the next several days, and by the following weekend I had completed the first rough draft! Twenty revisions and 13 rejections later...here we are!

Q: How did you pick the dinosaurs to include?

DB: First, I googled “weirdest” and “most unusual” dinosaurs. Slowpoke Archelon, who was bringing the ice cream, delivered a melted mess. Spiny Spinosaurus, who was decorating, got tangled up in the streamers. But alas, our story was limited to 32 pages. And some dinosaurs and their attributes were easier to rhyme than others. Enter Matt....

MFE: This was one of the most difficult aspects of the book, actually. We wanted to include a few dinosaurs that were well-known but also include several that kids may be unaware of - plus each dinosaur needed to have some interesting or unusual feature we could spotlight, AND we had to be sure the pronunciations of their names would fit within the meter of the rhyming verse. 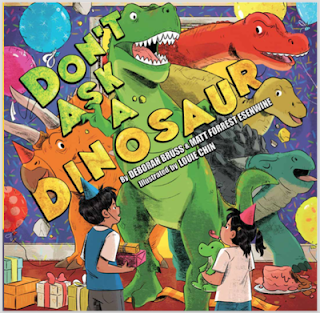 Q: What do you think Louie Chin's illustrations add to the book?

MFE: Deb and I love them! Their features are not only factually accurate (as best as we can tell these days), but Louie does a great job of imbuing them with emotion: sometimes they are happy, sometimes mad, sometimes annoyed! I also appreciate the fact that with so many dinosaur books out there these days, his illustrations don't really look like any other illustrators' dinos.

DB: My favorite illustration is of Tyrannosaurus Rex, who seems to be saying, “Oops! I am so sorry.” Louie also created some fun illustrations that had nothing to do with the text, such as the polaroid snapshots near the end, and the end papers, which by the way, would make great wrapping paper.

MFE: I just completed two poetry collections that I'm in the process of submitting (along with seven or eight other manuscripts!) - one is a creative non-fiction book and the other is a "sort of" Halloween theme - and I'm in the process of formulating plans for another really cool non-fiction poetry collection that I can't really talk about too much, because of its unique nature. 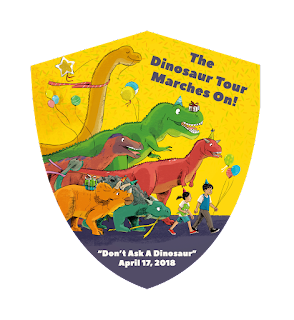 DB: Properly pronouncing the dinosaurs’ names. Matt had a head start since his son is infatuated with dinosaurs. When my sons were kids, their worlds were filled with horses, snapping turtles and soccer.

As for the future, Matt and I are playing around with ideas for another dinosaur story. Also, I plan to tweak some picture book stories that haven’t sold, and to do a major revision of a middle-grade historical fiction novel that takes place during WWII.

MFE: Contrary to popular belief, Dwayne "The Rock" Johnson and I are NOT twins separated at birth.

Seriously, though, one thing I'd like folks to know is that, if they're considering purchasing a copy, there's only ONE PLACE ON EARTH that you can order a copy online and have it personally signed by Deb and me - and that's at our own local indie bookstore, MainStreet BookEnds.

Because of a special agreement we have with the ownership, you can place your order and request that it be signed to whoever you'd like, we'll go to the store and personally sign it, and it will then be shipped right out to you!

I don't know if any other authors are doing this, but we really want to do as much as we can for the book-buying public. Certainly, you can visit us at any of the book signings we'll be holding (the complete schedule is posted at my blog), but for anyone who doesn't live in the area, I think this is a pretty unique offering!

Thanks so much for allowing us to spend some time here at your little place on the web, Deb - we really appreciate it, and I'm so glad you liked Don't Ask a Dinosaur!.

DB: I’m super excited that my first picture book in rhyme, Good Morning, Snowplow! (Scholastic), is coming out this fall.

Matt is not only a master of rhyming, he’s also my mentor when it comes to social media. I didn’t even know what a “blog tour” was. Now that I know, I’d love to do more. I’m also honored to be invited to Deborah Kalb’s blog, which features writers from all genres, not just children’s literature.

--Interview with Deborah Kalb. Here's a previous Q&A with Matt Forrest Esenwine.
Posted by Deborah Kalb at 6:50 AM