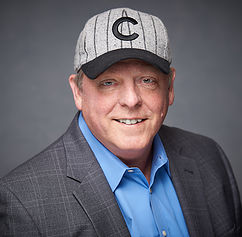 David Rapp is the author of the new book Tinker to Evers to Chance: The Chicago Cubs and the Dawn of Modern America. He is the former editor of Congressional Quarterly and Roll Call, and he's based in Washington, D.C.

Q: Why did you decide to write this book about the Chicago Cubs of the early 20th century, and their star trio of Tinker, Evers, and Chance?

A: I’m a lifelong Cubs fan myself. I began rooting for the Cubs when I was 10. Up to the point when I decided to write this book, they had never won. About six years ago they were in one of their frequent troughs of despair, and I asked myself, why do I still care?

I started reading about the team, and I arrived at this period from 1906-1910 when they were a dynasty and won four pennants and two World Series, and they were led by three guys, Tinker, Evers, and Chance. I didn’t know too much about them, and I started reading, and there wasn’t a lot. Their stories got more and more complicated, and I decided I had to do it myself.

I did research, and one thing led to another, and I was hooked. There’s the grip the team has had on me and on so many Cubs fans. It’s a morality tale of America—sports fanaticism was embedded in this decade. [I got] to see the rise of the team, what these guys did, and what was going on in America at this time.

Q: So how did the rise of baseball during that time coincide with the rise of Chicago as a city?

A; Chicago had been a baseball city since the National League was created in 1876 shortly after the Chicago fire. The White Stockings were dominant in the 1880s, and then fell on hard times in the 1890s. By the turn of the century, baseball was going through hard times. 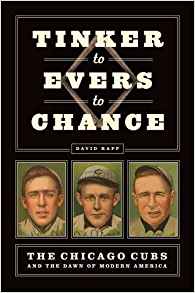 Comiskey set up shop on the South Side of Chicago, and started outdrawing the National League team. [The A.L.] was promoting “clean baseball” as opposed to the “dirty baseball” the National League had been known for. Baseball was a blood sport. There was cheating, stepping on toes with cleats, anything you could get away with, foul and vulgar language on the field.

The American League was offering clean family-friendly baseball at a time when Chicago was exploding in population and immigrant communities. The population was about 1 million at the time of the World’s Fair in 1893 and about 2 million by 1903.

It doubled in population through European immigration and migration. The recession of 1893 forced people off farms. Chicago became a commercial hub with stockyards and other industries. Sports became a meeting place. Baseball stadiums started filling up.

An informal social safety net developed among saloons in Chicago, which were pretty much unregulated. They became a safe haven for a lot of men—they had free lunches along with beer, newspapers, bathrooms, they were places to hang out during the day.

Also, the progressive reform movement was sweeping the country. The committee of 100 businessmen tried to kick out the existing city council and put in good-government types.

Baseball was rising too—it was one of the ways the city was able to break down some of the ethnic and economic dividing lines of the city. Everyone was rooting for their team.

The Cubs, or the Colts as they were called back then, had to clean up their act. The White Sox started outdrawing the Colts. The Cubs had a manager, Frank Selee, who was known for his own brand of clean baseball. He put Chance, Evers, and Tinker together, and started rebuilding the team.

The Cubs and the White Sox were very successful and ended up meeting in the World Series. The city went batshit crazy over baseball in 1906. All of that was converging in Chicago at the same time.

Q: What do you see as the legacy of these Cubs players?

A: Sports heroes are a complicated topic. We’ve created a structure around sports heroes. There’s the Hall of Fame in Cooperstown, an idyllic little town. I think the legacy of Tinker, Evers, and Chance is that no one of them was an outstanding heroic baseball player like Babe Ruth, Willie Mays, or Sandy Koufax.

Frank Chance was an awfully good ballplayer. He was a player-manager, and the leader of the team. Evers and Tinker were good solid ballplayers but not stars. These were real people, they lived real lives, they came from different backgrounds, and they had different motives for getting involved in baseball.

Their legacy is that they were not myths, they have a real story and that’s what’s interesting about them and what we can relate to today.

Q: What accounts for the ongoing popularity, not just in Chicago, of the Cubs?

A: It’s something in the blood, I guess. The thing about Cubs fans that’s different from a lot of teams that had intermittent success is that it does test your loyalty and just winning a championship, winning the World Series—it’s a 162-game season and the playoffs last a month, and 29 teams have “failed” by contemporary American standards of success. You win it all, or it’s not worth it. George Steinbrenner turned that into a mantra.

The Cubs fans are very different. They root for the team win or lose. If they lose, they come back and try again. Nothing makes us happier than a Cubs win. I’ve always rejected the idea of the lovable losers. No one likes to lose.

Some fans of some teams wallow in defeat. It’s in their psychological makeup. Cubs fans don’t wallow. It’s all about moving on to the next game. That was the attitude of Ernie Banks, the greatest Cub of all time. Every day he came to the park, he said it’s a beautiful day for baseball, let’s play two.

A: Not yet. I’ve got a couple of ideas but I’m still focused on getting this book out and helping it find its audience. Any book that gets published is a perfect storm—the author’s passion, the publisher’s desire to do it, and an audience being there for it.

A: I hope it will be judged by the fact that this is not just a baseball book. There are a lot of baseball books out there. One of the peer reviewers, one critique was that readers will be surprised that important games are not discussed in this book at all. I talk about some important games, but each is helping me illustrate a point.

My wife is a baseball fan, but not a rabid fan, and I wanted her to enjoy it too. And other people who are interested in American history and culture, and how we got where we are, and the main reasons how baseball found its way into our mass psyche and helped shape who we are today.

All the little episodes I talk about make up the story, and if you don’t find out about specific baseball games, you can find that elsewhere.