Lynda Cohen Loigman is the author of the novel The Two-Family House. She studies at the Writing Institute at Sarah Lawrence College, and she lives in Chappaqua, New York.

Q: How did you come up with the idea for The Two-Family House?

A: My mother and her two sisters grew up in Brooklyn…When I was young, my favorite stories were the ones my aunts used to tell me about their Brooklyn childhood. My grandmother and her sister-in-law were best friends.

Six months after my first child was born (a daughter), I read an article about a new kind of technology that gave couples a better chance at choosing the gender of their unborn children. That was back in 1999 and it wasn’t yet possible to preselect gender with in vitro fertilization.

Several women were interviewed about their desire to have a daughter, and the desperation that many of them expressed really struck me. My grandmother had told me many times throughout my childhood that she always wished for a son.

After I read that piece, I wondered whether my grandmother might have paid the money for the procedure the article described if that option had been available to her. The article made me think about the lengths people might go to in order to have a son or daughter.

Afterward, I couldn’t stop thinking about how tense life in my mother’s childhood home might have been if both families hadn’t had three girls each. 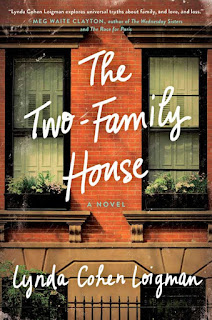 I reimagined that house, but with different residents and different family situations. One of the fictional families has all boys and one has all girls. That setting felt like the perfect percolator for drama and tension.

Q: The book takes place over several decades. Did you research the time periods you write about, and what do you think the book says about the role of women during the mid-20th century?

A: One of the most daunting things about writing this story was that, even before I began, I knew it was going to cover a very long period of time. It starts in 1947 and goes through the late 1960s.

I did a lot of research, but most of it was focused on the 1950s, which is when the bulk of the story takes place. I researched everything from baseball to the cardboard box industry – which was surprisingly fascinating.

In order to set the right tone, I read old women’s magazines, listened to music from the late 1940s and 1950s, researched popular movies and television shows and learned a lot about the recipes from the time period.

Helen and Rose lead small, quiet lives – they are not women who are out in the working world or traveling much outside of their neighborhood.

Their lives are modeled on the kind of life my grandmother led – very focused on family and children. This intensely domestic life shapes the characters’ identities and relationships. At times, especially for Rose, the limitations become claustrophobic.

The opportunities for women changed so much over the period of time the book covers, and I think Mort’s changing attitude about the education of women partly illustrates that. Helen and Rose are bound by the confines of their generation, but Judith and Natalie – the women of the next generation – have many more options.

Q: The book focuses on difficult dynamics within an extended family. Did you know from the beginning that you’d write the book from a variety of different perspectives, or did you change that as you wrote?

A: I always knew I would write from the alternating perspective of the four adults. I had been thinking about the story for many years before I ever wrote it down, and by the time I started putting it on paper, each character already had a distinct voice in my mind.

What evolved as I wrote was the addition of the voices of the two children – Natalie and Judith. That happened at first because I needed a narrator for the scene describing the night the babies were born. I couldn’t write that from the perspective of Rose or Helen alone, and I didn’t want to write it twice, so I chose the oldest of the daughters, Judith, to tell that part of the story.

Q: Are there any particular authors that have influenced you?

A: I have always been a huge Edith Wharton fan. For me, she is the queen of character development and internal motivation. The way she brings excitement and drama to what some people consider to be simple domestic moments is so impressive.

A: Right now I’m working on a story about two estranged sisters who grow up in Brooklyn but are reunited in the early days of World War II at the Springfield Armory in Springfield, Massachusetts.

While one sister lives in relative ease on the bucolic Armory campus as an officer’s wife, the other arrives as a war widow and takes a position in the Armory factories as a “soldier of production.”

It’s another story about family secrets, but it also explores a lot of the details of life at the Armory. I’ve visited the Armory a few times now for research, and I can’t wait for readers to get a glimpse into that fascinating world.