Douglas Smith is the author of the new biography Rasputin: Faith, Power, and the Twilight of the Romanovs. His other books include Former People. He worked for the U.S. State Department in the Soviet Union and for Radio Free Europe/Radio Liberty in Munich, and he lives in Seattle.

Q: You begin your book with an anecdote about a photographer taking pictures of Rasputin’s home town in 1912. Why did you choose to start with this scene?

A: It’s always challenging for a writer, how you begin and how you end. The logical thing would have been with his spectacular…murder, but that was too obvious.

I liked the photograph—it was taken in 1912…It was a way to bring readers into the story and into the place with a remarkable color photo taken when all of Russia was talking about Rasputin. Rasputin’s house is not included in the photo, but it sets the stage and launches into the story…

A: One of the most common is that he was evil incarnate, Satan personified. That’s so utterly wrong, it’s [surprising] this myth took hold.

He was very much a man of peace. During the Balkan Wars before World War I, he came out against Russian involvement, and on the eve of World War I—I reproduce a letter where he was begging Nicholas II not to listen to the warmongers; if you are a true Christian, killing is wrong. That’s important about Rasputin and is misunderstood. 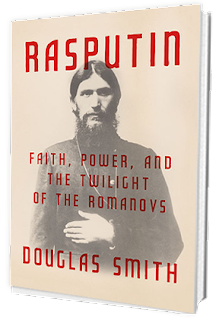 The idea that he was an orgiastic sex machine like in the Boney M song—he was an adulterer, no doubt, and he probably [was involved with] prostitutes, but if he was a sex maniac, there would have been illegitimate children, and there isn’t a mention of that anywhere.

His influence over policy and the Czar is greatly exaggerated.

Those are just a few of the myths we can do away with.

Q: Yes, I wanted to ask you about the relationship between Rasputin and the royal family.

A: He was only close with Nicholas and Alexandra and their children. The larger Romanov family all resented him, and thought he was wicked.

Alexandra was the one who was closest to him, closer than Nicholas was, though he too took comfort from Rasputin. He was their spiritual counselor, their life coach, their connection to the peasant masses.

They were isolated in the palace, and believed there was a mystical bond between the Czar and the people, and he personified that.

When people think about Rasputin and the royal family, they think he was brought to the lace and helped heal the boy [Nicholas and Alexandra’s son].

But even more important with respect to their relationship, Alexandra knew Nicholas was weak. Rasputin became a surrogate backbone. She looked to Rasputin to [help] Nicholas rule as he needed to. She was telling Nicholas, Do what Rasputin says! You have Rasputin’s comb, use it before meeting with the ministers to give you strength! 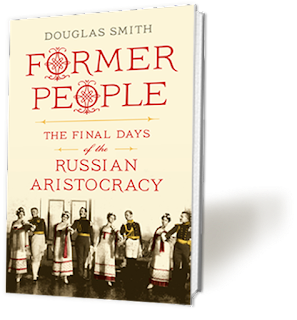 Q: Why does Rasputin still elicit such fascination today?

A: In part because his story still seems unbelievable. In the beginning of the book I refer to a dark fairy tale. It is one. A peasant on a religious quest makes his way to the palace where almost no one is granted access, wows them with religious insights, charisma, simple peasant ways.

There’s World War I, his spectacular murder, the fall of the Romanovs—it sounds like an epic. That’s why we find the story so [unforgettable].

A: I didn’t want to just go to the library and repeat stories from previous books. I thought if I’m going to add something, I have to go back to the original documents, which hasn’t been done.

There were fascinating letters, diaries, police reports, all sorts of documents no previous biographer had seen. It allowed me to recreate his life with much greater accuracy and detail. It helped explode the myths that people thought were true.

Q: And did anything particularly surprise you?

A: One example is that Rasputin was in Moscow and went to dinner at the Yar [restaurant]. This is an example of the dramatic stuff I’ve uncovered. We’ve believed  [this dinner] was proof of how debauched he was. I found in an archive in Moscow, in a police file, I found that none of the debauchery happened.

Only a couple of months later the head of the police agency in Moscow, a foe of Rasputin, had the whole story created. It was a complete lie. It was an attempt to blacken Rasputin’s image with the Czar...I was able to deconstruct the whole story.

A: It’s been getting great reviews in the U.K.!