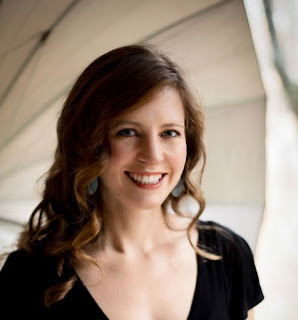 Lindsay Starck is the author of the new novel Noah's Wife. Born in Wisconsin, she teaches and writes in Chapel Hill, North Carolina.

Q: You write, "These two elements--the concept of pairing and the belief that the flood story was more complex than toy companies would have it--led me to Noah, and from there, to his wife." What about those elements intrigued you?

A: Well, by “pairings,” I mean relationships— and I consider Noah’s Wife to be a novel that explores many different kinds of relationships. I wanted to write about marriages, friendships, families, communities.

And, like the flood story itself, relationships are complex. They have their darker elements as well as their moments of laughter and hope.

My characters battle grief, disappointment, infidelity, and fear. They learn that no one is perfect, that even the people they love can let them down—and through these encounters they also become more patient, more forgiving, and ultimately more courageous.

Q: Noah's wife wasn't named in the Bible or in your novel. What does this say about her identity?

A: Noah’s wife wasn’t named in the Bible because, I think, her name didn’t matter. She was a figure on the margins of the story. My task as a writer was to transform her from a marginal character into a protagonist. 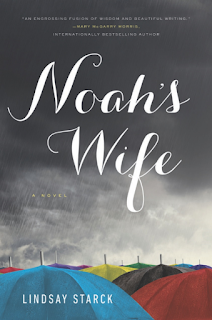 And yet, even when it comes to her own story, my Noah’s wife is a character who prefers to define herself through her relationships. She doesn’t have a strong sense of self, which is why she surrenders herself so willingly to others.

At one point she worries that if she doesn’t keep her gaze fixed upon Noah, he might disappear. “What would become of her then?” she wonders.

Over the course of the novel, she will need to learn to stand on her own. That’s her struggle; and, even if she doesn’t realize it, that’s her eventual goal.

Q: What role would you say religion plays in the novel?

A: For me, religion is a kind of backdrop, or setting, for a story that is all about people’s relationships with one another— not about their relationship to the divine.

I wanted this novel to be about faith in a very broad sense. I was interested in exploring the faith people place in each other, in themselves, and in their community.

In the biblical story God destroys the world while saving the best part of it; so I was curious about the things that people were most interested in saving from destruction, if they could.

A: I revised this novel for six years— and I tried many different endings before hitting on the right one!

I always imagined the town as the “ark” in this story, and I knew that I wanted to someone to leave and to return from the town/ark the way the dove does in the biblical flood narrative.

But I didn’t know who would be doing the leaving, and that was something I had to figure out after I had grown more familiar with the characters. Very little of the novel has remained unchanged from the first draft, except perhaps for the prologue.

A: Since I’m a graduate student by day (novelist by night), first I’m finishing a dissertation about literature and gossip! Then I’ll be working on my next novel, which will be very different than this one. It will be set in the Midwest, where I grew up, and will include as little rain as possible.

A: I wanted to be a veterinarian when I was growing up. (I read all of the James Herriot books over and over again.) I think that’s a huge part of what drew me to the Noah story… I wanted to write about animals!