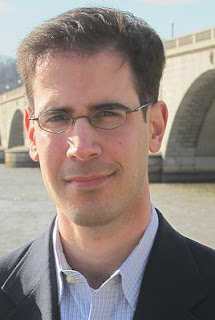 Jonathan Horn is the author of the book The Man Who Would Not Be Washington: Robert E. Lee's Civil War and His Decision That Changed American History. He is a former White House speechwriter and his work has appeared in a variety of publications, including The New York Times and The Weekly Standard. He lives in Bethesda, Maryland.

Q: How did you decide on your book's theme and title?

A: The title and theme of the book started with a question about Robert E. Lee: How did an army officer who was both the son of George Washington’s most famous eulogist and the son-in-law of Washington’s adopted child go to war against Washington’s greatest legacy, the Union?

My interest in the question flowed out of my own experience growing up near the Potomac, a river that I came to see as a symbol of the fraught connection between Lee and Washington.

And at the start of the war that tore the country Washington had forged in two, leaders on both sides of the Potomac sought Lee’s service for high command.

Q: You describe Lee as "trapped in the middle...Either Lee's name must be united with Washington's, or it must be banished from all associations." What is Lee's legacy today? 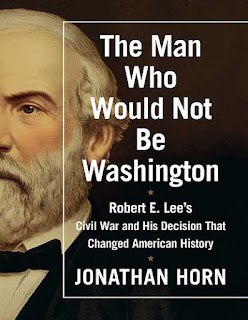 A: Robert E. Lee remains a polarizing figure. The fierce debate in recent months about what should happen to old Confederate monuments offers just the latest evidence. Much attention has focused on plans to remove a longstanding Lee statue in New Orleans.

What I find interesting is that Lee himself during his last years opposed building Civil War monuments and even opposed preserving battlefields.

He wrote, “I think it wiser moreover not to keep open the sores of war, but to follow the examples of those nations who endeavored to obliterate the marks of civil strife and to commit to oblivion the feelings it engendered.”

That advice if taken too far, of course, could lead one astray. Building over ground as hallowed as Gettysburg, as Lee seemed to favor, would have represented a terrible loss to history.

That perspective should make us pause today before tearing down monuments that have stood for more than a century. For better or worse, those statues have also become part of American history.

Q: In the book's conclusion, you contrast Lincoln's position in American history with Lee's. How would you describe the role each plays in relation to the image of George Washington?

A: At the start of the Civil War, Robert E. Lee heard people seeking his service on both sides compare him to George Washington.

A Lincoln administration emissary hoping Lee would accept command of the main Union army went so far as to say that the country looked to Lee as “the representative of the Washington family.” Instead of defending the Union that Washington forged, however, Lee ended up at war against it.

Today, Lee is no longer the American we most closely associate with Washington. As to the question of who is, the answer lies in the layout of our nation’s capital. It’s the Lincoln Memorial that stands next to the Washington Monument because it was Abraham Lincoln who saved the Union that Washington forged.

Q: Why did Lee opt to side with the Confederacy, and what were his views on slavery?

A: On the eve of the Civil War, Lee personally opposed secession partly because he believed that Washington and the other Founders had not intended to allow for it. Yet Lee also believed that he had no choice as a Virginian but to follow his state, even if that path led him to war.

There is a famous passage where Lee described slavery as “evil,” even as he accepted it as “necessary” for the time being. Lee, in a sense, inherited the unresolved question of slavery from Mount Vernon when he became executor of the estate belonging to his deceased father-in-law, who had grown up at Mount Vernon and still owned slaves descended from there.

A: I am on to my next book. It’s about American history again.

A: I can’t say enough about all the librarians and archivists who made my research possible. Anyone who cares about history owes these dedicated professionals a debt for preserving it.

--Interview with Deborah Kalb. Jonathan Horn will be participating in the Bethesda Literary Festival, which runs from April 15-17, 2016, in Bethesda, Maryland.