Margaret Verble is the author of the new novel Maud's Line. Her work has appeared in a variety of publications including The Saturday Evening Post and the Arkansas Review. She also has worked as a consultant and small business owner for several decades. An enrolled and voting citizen of the Cherokee Nation of Oklahoma, she lives in Lexington, Kentucky, and Old Windsor, England.

Q: How did you come up with your main character, Maud, and with the idea for this book?

A: I came up with Maud because I had been told by several people that in order to get a first novel published, it was best to have a single story character.

I knew I wanted to write about Cherokees; I wanted to set the novel earlier than when I set it, but if I did that, I would have to write about a group because it was still such a tribal setting. I had to set it at the time period where a sense of individuality was arising—that was around the 1920s.

Q: So did you come up with the time period first or the story first?

A: The time period first. I wanted to write about the land. It’s my family’s land; it has sustained me through my life. I started reading and thinking about the time period…

Q: What kind of research did you do to recreate the 1920s in Oklahoma?

A: I did background reading on the 1920s. I read a couple of books on the great flood of 1927. Other than that, I didn’t read a lot of books; I knew what that life was like.

A: I had no idea how the novel would end. I never know. I finished the first draft of another one--I get 30-40,000 words in, and I think these are dreadful people! It’s always good to get to the conclusion!

Q: Family is one of the key themes in the novel. Is the depiction of Maud’s family dynamics somewhat typical of life in this part of Oklahoma during the 1920s among members of the Cherokee tribe?

A: It’s typical of my family. It’s ultimately my own family I’m writing about. Since I finished the novel, I’ve read a book on the structure of the Cherokee family—it’s a good scholarly piece of work—and evidently that’s what they all were like. 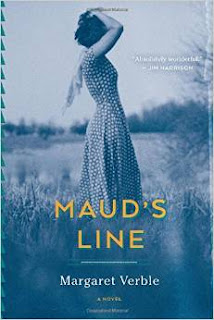 A: The book was originally titled "Maud’s Allotment." I sent it off to New York, and it was bought by Houghton Mifflin Harcourt with that title. They…decided “allotment” sounded heavy, and people who were not Indians would not know what it meant. My editor came up with “Maud’s Line”…I capitulated.

Q: What does the character Maud represent about women in that time period?

A: Cherokee women have always had a lot more independence than their white counterparts. Up until the 1820s they owned all the property and children. Men came and went. Women controlled everything. Into the next century, you see that going on.

They’re all with each other, holding the family together too. [In the book] the matriarch was dead, the grandfather’s wife, but all the aunts were around.

That was a time demographically, when you look at the 1920 census, the first time in the history of America where more people were living in cities. In the 1930 census [you can see that] people fled from the farms. That was going on [including] among Cherokees.

Q: So were the characters based on your actual family members?

Q: Were they people you knew as you were growing up?

A: Maud’s Aunt Nan and Uncle Ryde were my grandparents. All of them except Booker and Maud are literally my aunts and uncles. Maud’s little female cousin Renee is my mother.

A: Only vaguely real. My mother had a first cousin I didn’t hear about until I was a grown woman. He was a gorgeous-looking Indian man, Mark—he spent his entire life in an insane asylum.

Mark always haunted me. When I created Lovely, what I wanted to do was give life to people who are dead and never had a real chance. They had to put [Mark] away when he was 16 or 17. I based [Lovely] loosely on Mark.

[The characters] Lucy and Viola—the woman Viola is based on was still alive when I was a little girl; she lived to be 103. They all liked her. She was their aunt by marriage and also a cousin by blood.

Q: You said you’re working on another novel—can you say more about it?

Q: With the same characters?

A: I’ve just done a first draft—we’ll have to see!

A: That cow [in the book’s first chapter] really was axed in the back. It was a problem we were having with our neighbors. When a cow was axed, you have to kill [it]. I knew…the neighbors were axing our cows, and that haunted me.

Once I got that scene over with, I didn’t know what to do with the novel! I knew I had a great character in Maud, and then I brought a bright blue wagon along, and Maud was in control of the story.