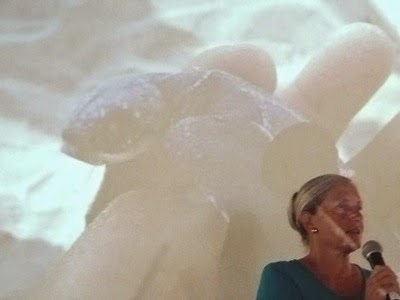 Ann Wyckoff Carlos is the author of the bilingual children's books Emily, The Baby Sea Turtle and Anny the Sea Turtle. She is the education coordinator for the nonprofit group AMA Mexico, which works to preserve sea turtles. Previously, she was CEO of the group Direct Relief International. She lives in California and in Mexico.

Q: How did you end up writing these children’s books about sea turtles?

A: I never intended to publish them. We were using them as part of the curriculum for educational programs in Mexico. There are lots of people who work with us, and do turtle talks on the beach, and they came up with the idea of publishing books. I have never done any author or book workshops.

The first book, Anny, has been used in classrooms in Mexico for four years, as an animation. It’s done by university students from Mexico. They work as a team with our environmental educator…

The end of the Anny book shows her going back to the ocean. Our interns ask the children, Would you like to meet her children? They say, Yes, of course! They all pile into buses and come down to the beach to the liberation of the baby sea turtles.

Emily is one of Anny’s babies. [Her story] will be used starting this year.

Q: What’s the age of the children you work with?

A: The books are children’s books, so we start with preschool. They seem well received through sixth grade. [Husband] Manuel [Carlos], who’s an anthropologist, started doing workshops with high school students and university students to teach them to develop environmental workshops.

The young people participate. We have high-schoolers developing extra materials around the books and other facts to do with turtles. The children come early to the beach, and play games with the high school students, and the university students teach in the classroom. 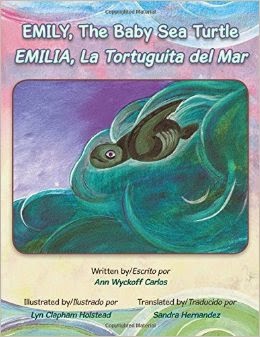 Q: How did you first get interested in sea turtles?

A: It was a little bit serendipitous. My family was always interested in environmental issues in California. My grandfather would trek with John Muir. Our family has always been on the coast, Monterey Bay, for seven generations now. We are land-and-sea oriented.

When Manuel and I retired, he said, Let’s go to Mexico. We found a place on a pristine beach, and we discovered that there were sea turtles [there].

Six months into our stay, a hurricane hit the Pacific Coast and wiped out the sea turtle preserve, which was very small. The little staff at the reserve left, thinking the nests had been wiped out to sea.

We were there, and I went out, and there were thousands of babies. They would [normally] have been picked up by biologists. I didn’t have much experience with sea turtles at that point. I worked to try to save them from birds. A local biologist helped. I got involved that way.

We reconstructed a small preserve—we started in 2002. Now there are 10,000 nests a year. We established a nonprofit; the government said it wasn’t coming back. Now we have 60 volunteers and university and high school students.

The beach is no longer pristine. If you look at the drawings in Anny, you’ll see buildings. The beach was targeted by the Mexican government six years ago to be a condo resort beach.

We were able to help with some of the enforcement of setbacks so the nesting habitats were preserved. It went from 500 to 10,000 nests--the sea turtles are not intimidated!

The existing science for sea turtles says they are very put off by lights, and we have a blaze of light. In Mexico, everybody does what they want.

That’s why I like the personality of the two little turtles [in the books]. I’m not sure they think! They come up, and lights are blazing, and there they are, laying their eggs!

The babies are sometimes distracted by the lights, but it’s the call of the sea [that they focus on], and they head in the right direction. It’s mysterious. 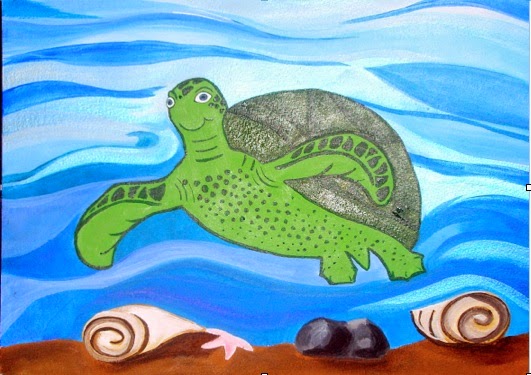 Q: How did you work together with illustrator Lynn Clapham Holstead to create your books?

A: I’m also an artist; I do murals on the beach in Mexico, but I’m not a known artist, I just paint little sea turtle pictures!

One morning I was painting a mural, and a young woman asked, Could I help? I said yes. She said, I’m Lyn Clapham, and I love to do murals, and I’ve done several at the [California State University Monterey Bay] campus. I said, my husband was a founding faculty member there, and she said, I took classes from him!

I said I’m working on a little book to present to classes, and would you consider being a book illustrator? She said, That’s my dream; I would love to. It was born out of serendipity….

Q: How do you work on the English and Spanish text of the bilingual books?

A: In the first book, the Anny book, Lupita [Guadalupe Cervantes Camacho] and I were in close contact during the writing of the book. I’m bilingual, and that worked fine….she’s not a speaker of English.

She’s part of the preschool planning group for the municipality, which is a pretty big group—60 preschools and elementary schools in the jurisdiction. She was responsible for the curricular development and had a lot of experience with that. Watching how she worked with the idea of making Annie a little person made me think that was the way to go.

The second book, I wrote myself. Then our environmental director, Sandra Hernandez, did the translation. She is the driving force in the classroom for the program itself, and I wanted her to participate in the book.

A: I have a little granddaughter, Anabel. who has grown up with the sea turtles. She’s 12. She wrote a play, The Jelly and the Bag. Plastic is a deadly thing that they consume. Anabel wrote this play, about a jellyfish who sees a bag floating in the ocean and tells it to leave.

I talked to her about expanding on that theme. We may have that as the third book. There’s also the idea of [writing about] predators of sea turtles. Raccoons—they eat baby sea turtles. That’s why we have to pick up every nest from the beach. I see this as an ongoing effort.

A: We really do want the students we’re working with to become stewards of the wildlife of the ocean. It’s one way of articulating the human value of protecting the planet.

All our volunteers understand that. Each one of us does one small thing, and if we do that, we all contribute. Turtles happen to be the way that we offer.

With the books, my purpose is to make students have affection for sea turtles and understand their plight, and that’s how, hopefully, we get to their parents, uncles, cousins—many are people who poach sea turtle eggs, [which is] quite profitable.

We are working against the tide, but [to focus on] affection for the turtles, it’s very useful to use the little books.