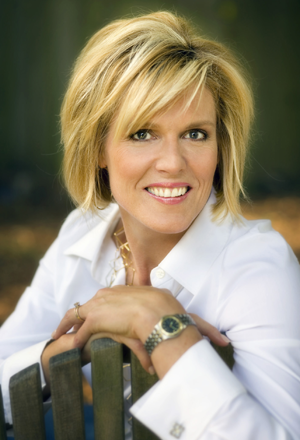 Caroline Adams Miller is the author of the new memoir Positively Caroline: How I Beat Bulimia for Good...and Found Real Happiness. Her other books include My Name is Caroline, Feeding the Soul, Bright Words for Dark Days, and Creating Your Best Life. She is a credentialed coach, and she lives in the Washington, D.C., area.

Q: Why did you decide to write a second memoir, and what do you hope your readers take from the book?

A: I wrote Positively Caroline because I realized that there was a major hole in the world of eating disorder books, and that was a story of hope that long-term recovery - more than 20 years of recovery - was possible.

Those types of memoirs and accounts exist in the alcohol and drug world, but without that type of book in the eating disorder field, it's impossible to know if it's a realistic goal. 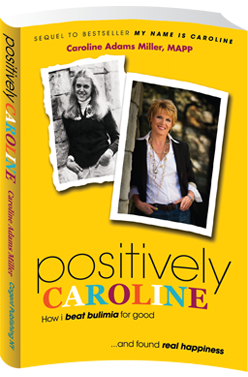 When someone has come before you and accomplished a goal, it gives you hope that you can accomplish it, too, and I knew from the 100,000-plus contacts I've received since My Name is Caroline was published in 1988 that it gave many people hope that they could get better, which then ignited important change for them.

As a result of my first book, whether I want it or not, I have a powerful platform to reach people in the eating disorder world, and I wanted to use it to get out a story that answered the main question I've received since 1988 - "Did you stay better?"

I realized as the years went by that while getting into recovery is incredibly important, and a major milestone for everyone who has battled an eating disorder, staying in recovery through pregnancy, childbearing, childrearing, professional challenges, relationship changes, empty nest, perimenopause, menopause, physical shifts and more is actually one of the most challenging obstacles anyone can face.

It may be a cliche, but it's not impossible to go through the rest of your life without having alcohol, drugs, or placing a bet, but you cannot avoid the daily touching, preparing and eating of food multiple times a day, thus opening you up to multiple opportunities to relapse. 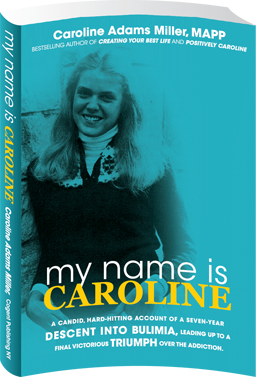 As I look back, I can honestly say that overcoming my eating disorder and being in recovery for almost 30 years could easily be one of the proudest accomplishments of my life because of the sheer number of obstacles you must overcome to be healthier and happier at my age.

Q: In Positively Caroline, you reveal some very personal and painful information about your life. Your daughter wrote an introduction to the book--what has the reaction to the book been from other family members?

A: It took me six years to write Positively Caroline because it is the hardest and most painful writing I've ever done. I didn't think I'd finish it, and on many occasions I was ready to pull the plug.

But what kept me going was watching my daughter grow into adulthood, and wanting her generation to know that while people still succumb to eating disorders, they can go on to have long, healthy and happy lives that aren't haunted by eating disordered thinking or behavior.

But to write that honest book about what I had to overcome to not just live, but to be truly alive and flourish in life, I had to discuss some ugliness in my family of origin and how I had to deal with it to continue my path of healing.

So to be respectful, not just to my own immediate family - who had to sign off on the memoir because I wanted to be sensitive to their feelings - I gave my brother and sister copies of the manuscript long before it was published. Neither one requested changes, and the book is dedicated to my brother, so even if there are mixed feelings, no one has been critical or unhappy about what I have shared. 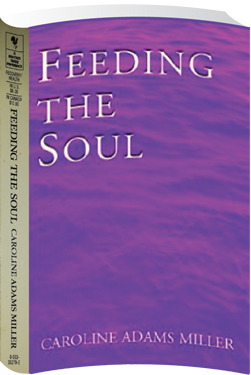 I do think that it's hard to discuss the fact that physical abuse occurs in a family, especially because I was my parents' primary target, and they may have conflicted feelings about that.

It's also more embarrassing to me to admit that I wasn't really loved - by their own admission - which feels more shameful than my eating disorder, but I've found that there are many successful people who say the same thing - the biggest problem they've overcome in life is the ways in which their own parent has tried to hurt them.

I also should note that 60 pages were cut from the book before publication, and the only scenes and stories that made the final product were those that were most important in making the points that needed to be made around persistence, resilience, happiness and finding purpose.

Q: Your first memoir, My Name Is Caroline, is being re-released on its 25th anniversary. Looking back, how have things changed for you since the book first came out?

A: One of the main things that has changed is that I went from being known by nobody to being in the media on a regular basis for almost 25 years - not just about eating disorders, but also about my professional field of Positive Psychology and coaching.

I've published a total of six books, including a best-seller in the goal-setting field, Creating Your Best Life (Sterling 2009). So I've not just continued to write, I've created a career around my three grown children, and my husband of 30 years - which is includes both new and unchanged features in my life.

I've moved from the Baltimore area to the same neighborhood I grew up in, and have been here for almost 20 years. I went back to school and got a Master's degree in the science of happiness, Applied Positive Psychology, in 2005, and that education underscored some of the things that matter in life. 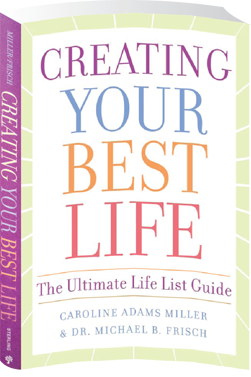 I think I'm happier and feel like my life has meaning in ways it didn't before, and I've also grown to appreciate one of the main lessons in Positive Psychology - that nurturing relationships with the people who bring out the best in me, and whom I care about - is one of the most important things I can do with the time I have.

At one time, I may have worried what people thought about my willingness to be public about something that others might be afraid to share, but in the last 25 years I've become more certain about how important it is to be true to yourself, and not to try to please anyone else.  I spent too long trying to make other people happy, and now I know that the only person I need to look at in the mirror at night is myself.

The #1 regret of people in hospice care is that they lived the life other people expected of them, and not the life they truly wanted to lead, and I know that I will not be that person because of the unusual paths I've taken to be authentic.

Q: Which writers have particularly inspired you?

A: I love to read writers whose prose is so easy on the eyes, and that literally make me hold my breath while I read. So I love Nelson DeMille, who writes simple sentences but tells fabulous stories that you just don't want to put down. I love Michael Lewis for that same reason, although he writes about life and not fiction, and Malcolm Gladwell's books are intriguing because they draw you in quickly and impart psychological/economic/scientific findings with brilliant and memorable stories.

I love Maureen Dowd's columns in The New York Times, too, because she can artfully say what everything is thinking but with more sparkle and humor and brutal honesty than most people can put together. And I can't forget John Feinstein, who writes about sports in unforgettable and masterful ways - again, simple prose that tells the best stories. 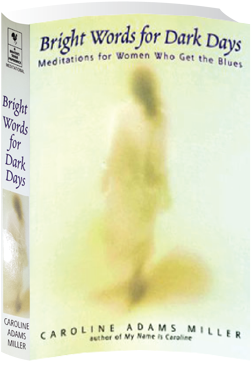 A: I've decided that my next book is on grit, so I'm assembling everything I need for that book proposal and sample chapter, but I'm also busy marketing and promoting Positively Caroline. My coaching career is my primary occupation, but I'll be getting more credentials in some of the areas that intrigue me like Appreciative Inquiry, and continuing to give speeches and teach classes in the field of Positive Psychology and goal-setting.

A: I believe that going out of your physical comfort zone is helpful in terms of learning to take risks, so I'm competing as a Masters rower and swimmer, and am also pursuing another black belt - this time in Tzee Wei Kuehn, which is close-in self-defense.  I'm active in every sense of the word, and that keeps me alive!