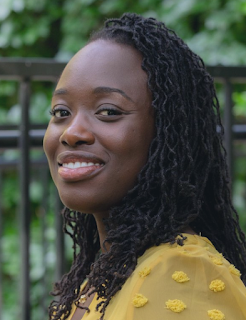 Shirlene Obuobi is the author of the new novel On Rotation. Also a physician and a cartoonist, she lives in Chicago.

Q: What inspired you to write On Rotation, and how did you create your character Angie?

A: I’ve written my entire life, but I’ve always been scared to write about a character who was like me. I thought it delegitimized me as a writer.

But in medical school, I went to a talk by Junot Diaz during which he spoke directly to the writers of color in the room and told us not to be afraid to speak from experience. And it really opened my eyes.

Most writers write from experience, but it’s those of us whose experiences are considered “alien” or “niche” who get scrutinized for it - so often, people assume that On Rotation is autobiographical, or that Angie’s voice is my own, when really I worked quite hard to craft her and it.

Angie Appiah is supposed to represent, in a lot of ways, the average Ghanaian American girl. Her name is like a Ghanaian Sarah Jones. Her body type is what one of my Nigerian friends refers to as a “regular West African” figure.

And I really wanted to challenge the concept of Black women, especially dark skinned ones, being strong, capable, and noble all of the time.

And so in making Angie, I attempted to create a character who tries hard to be strong and dutiful, but is also profoundly sensitive and, well, young. She’s only 25. She’s figuring out what she wants, and she makes mistakes.

It was so important to me to really present a woman with her features, her identity, as fully human and fallible and still deserving of love.

Q: You include very helpful footnotes about medical terms throughout the novel--why did you decide to make those a part of the book? 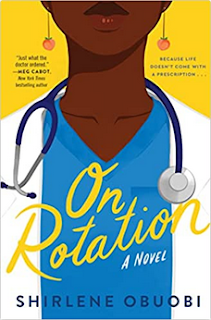 A: On Rotation is written in a very close first person, but is also chock full of niche info that would be inaccessible to people outside of medicine and those who aren’t Ghanaian.

I tried, initially, to include those explanations, in text, but I felt like it rang false– why would Angie interrupt her thoughts to explain what “pimping” was, for example?

I’m also biased - I LOVE footnotes in fiction. They feel like little Easter eggs. They’re optional - you could read all of On Rotation without looking at a single footnote and probably still follow the story - but full of little asides that I hope enrich the narrative.

A: I actually rewrote On Rotation. The original draft had both of Angie and Ricky’s POVs. But the first and last chapters are largely unchanged. The meat of the sandwich was the toughest part.

Q: How would you describe Angie's relationship with her parents?

A: Many eldest daughters in immigrant families will find Angie’s relationship with her parents to be familiar. Angie carries the full weight of her parents’ expectations. They’ve worked very hard to thrive in the United States and to provide Angie with an easy upper-middle class life.

(You’ll note that Angie doesn’t really worry about money– she buys clothes all of the time and doesn’t panic about rent when Nia says she’s moving! That’s some serious financial privilege right there!)

For many of our parents, self-determination is a luxury, and something they may pursue later in life: survival and success are more paramount. Angie, as the first born, is expected to live that way too to ensure that her parents’ investment lasts another generation.

But she’s been raised in the United States, with a different set of priorities and values from her parents, and also without the perspective that her parents are also full people who were once floundering 20somethings! It creates some tension.

A: I’m trying not to jinx things, but I’ve got two drastically different WIPs going right now. Both will involve Black female doctors, because I’m probably always going to write about Black women in medicine. We’re a tiny but mighty group, and I’ve gotta represent.

A: I wrote On Rotation to present a point of view that I hadn’t really seen extensively explored in women’s fiction. I hope readers work to immerse themselves in Angie’s mind, her inner thoughts, and try to understand what it might be like to walk in her shoes. They’re a different pair than we’re used to!