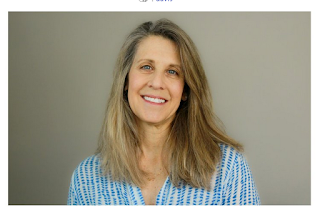 Laurie Trumble Davis is the author of the new children's picture book The Unsinkable Gus Davis. She lives in Hopkinton, Massachusetts.

Q: What inspired you to write The Unsinkable Gus Davis, and how did you create your characters Bean and Gus?

A: The character of Gus is based on a true story about my French bulldog. He was a big personality with perfect comedic timing - I just had to write about him!

Bean is based on my son and daughter, their loving nature toward Gus and the bond they had with him. It was inspiring to watch how they used creative problem solving to keep Gus safe. Believe me, Gus would have sunk consistently if my children weren’t there!

Q: What do you think Paulette Bogan’s illustrations add to the story?

A: Paulette perfectly captured Gus’s personality, moods, and gestures. Her illustrations add a visual dimension that make the characters and story immediately appealing and engaging. Her use of color and movement make you want to turn the page! 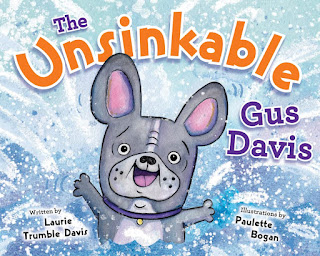 Q: What do you think the book says about water safety?

A: The story introduces water safety in a fun playful way by helping make children aware of the importance of being careful and responsible near the water for yourself and pets in a non-scary way.

Q: How did you get interested in writing children’s picture books?

A: Gus’s personality and character made for great storytelling so I began to write them down. But even before that I would share his antics with friends and family, which always brought a laugh!

Books have always been an important part of my life and my children’s lives; when I realized that the stories I was creating were bringing such joy, it was a natural next step.

A: Gus is such an incredible character--there are so many stories to tell! Children have responded so well to Gus and his character I’ve decided to write another one. His understanding of the world and what readers understand of the world make for some fun and exciting material!

A: As a children’s book author I’d like to introduce children to ideas and issues that are important in a playful way. To create relatable characters that honor the perspective of the child and introduce ideas that guide children toward expanding that perspective using humor and attitude.