Michal Schwartz is the translator of the book Dancing on a Powder Keg, by Ilse Weber, a writer who was killed in the Holocaust. Schwartz studied literature and philosophy in Frankfurt and Jerusalem. She obtained a Masters of Studies in Law in Canada, and has taught philosophy of law at the University of Toronto.

Q: How did you come to translate Ilse Weber’s work, and what did you know of her before beginning the translation?

A: I first heard of Ilse Weber four years ago, when I was offered to translate her letters and poems that were published in Germany. I was at first skeptical; another “Holocaust” book…Something though made me take the book home and start reading it the very same evening.

Once I started, I could not stop. Ilse’s vivid and charismatic personality seemed to pop off the pages. I felt as if I was there with her, sharing her experiences, as a woman, writer and mother... So much so that at times I wanted to warn her, urge her to make this or that decision…

Q: The book includes letters and poems. What do they say about Ilse Weber’s creation of art under extremely difficult circumstances?

A: The letters begin in 1933. Hitler has just been appointed chancellor of Germany. Ilse, already a successful children’s book writer and poet, is making a living as a playwright and composer for children.

As the Nazi propaganda infiltrates through Europe, Ilse’s work is gradually turned down, until finally she is forced to look for the odd jobs Jews are allowed to take.

All this while Ilse channels her creativity into the letters she is writing to her friend. In them, Ilse records daily hardship, personal emotions and political comments with a powerful voice that combines clarity and irony. 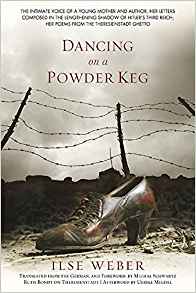 Her expressive writing is a testimony to the supportive power of creativity in grim circumstances. This is even more manifest in the poems she wrote in the Theresenstadt ghetto, where she worked as a nurse at the children’s infirmary.

To entertain and console her little patients and fellow inmates, she wrote, composed and performed songs with a contraband guitar. This was carried out underground and Ilse risked her life.

She was almost caught when she wrote a poem about the German massacre of Lidice, a small town 20 km from Prague. Her “camp poetry” was both an act of compassion and political defiance.

Years later, former inmates told her surviving husband how her poetry helped them carry on. Ilse’s creativity was literally a heroic act of helping people survive the ghetto.

Q: Did you learn anything that particularly surprised you as you translated her work?

A: Most striking was Ilse’s sense of humor; until recently a taboo when it comes to the subject of the Holocaust.

Ilse, of course, was aware neither of this interdiction nor of Theodor Adorno’s claim that writing poetry became impossible after Auschwitz. Her descriptions combine compassion with kind humor. Even her poems can at times bring a smile, especially when she writes about children.

And on a different note: a known fact, yet always shocking, especially when encountered as “directly” as in Ilse’s letters, is the world’s blindness to the plea of the persecuted in Europe. Ilse’s accounts of the cynical measures taken against any attempt to leave Europe and find refuge are truly heartbreaking.

I was also surprised to learn that people were quite informed about Nazi propaganda and actions and yet few, Jews and non-Jews alike, considered it an actual threat until it was too late.

A: There is so much to say here… Endorsed by Yad Vashem, the World’s Holocaust Remembrance Center, the letters and poems provide an authentic document of life under Nazi persecution. Ilse’s courageous story makes her an iconic heroine of the Holocaust.

She was a remarkable woman who insisted on honesty, even when it was painful. Ilse believed in humanistic values and adhered to them regardless of the price she had to pay.

As such, she is a beacon in today’s political climate. Reading her descriptions of the many variants of human behavior under duress is akin to holding up a mirror to ourselves: how would we react if we had to face those situations?

Her letters and poems make us realize how fragile “normal” everyday life is in the face of hatred and bigotry, and how vigilant we have to be. Always.

A: I am translating an award-wining book on Einstein’s years in Berlin during World War I. It was in those years, 1914-18, that he came up with his final, revolutionary version of his theory of relativity and became a pacifist, thereby running counter to his nationalistic colleagues.

It was a destructive period that also generated startling developments in science, culture and geopolitics, which influence still resonates today. Mostly, it was the war and the subsequent political-social climate that not only did not end all wars but also led to World War II.

A: There are numerous renditions of Ilse’s songs on YouTube. As friend of mine told me, listening to them she felt like going down the rabbit hole.

In 1939, Ilse sent her older son, Hanuš, to London with one of Sir Nicholas Winton’s kinder transports. Three years later she was deported to the Theresienstadt ghetto, where she wrote him the poem “Letter to my Child.”

In 1944, when the entire children’s infirmary was deported, llse volunteered to accompany the ghetto’s sick children to Auschwitz, where she and her younger son, Tommy, were murdered. A friend told her to sing with the children as she entered the gas chamber.

The two links below are to an English rendition of “Letter to my Child” and “Wiegala”- her lullaby that was featured in the Tony nominated Broadway show “Indecent.”