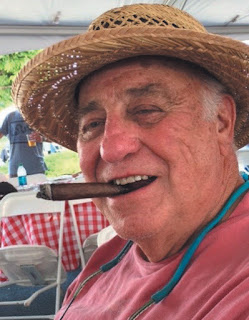 Ron Cohen is the author of the new book Of Course You Can Have Ice Cream for Breakfast!: A Journalist's Uncommon Memoir, which he wrote for his grandchildren. Over his 40-year career in journalism, he served as managing editor of United Press International and executive editor of Gannett News Service. He also co-wrote Down to the Wire: UPI's Fight for Survival. He lives in Potomac, Maryland.

A: After retirement in 2002, I sought a meaningful project where I could continue writing — and it took eight long years to decide on a memoir.

I have four grandchildren under 14, three in Israel and one in California, that I get to see far too infrequently. To them, I was a hugging-kissing machine who adored them. But they really knew little of me as a person and what I had done professionally, and precious little about our family.

I set out to rectify the situation, but by no means is this a children’s book. There are, in fact, 70 million grandparents in America, many of whom are contemplating — as I was — their legacy. I hope “Ice Cream” will inspire some of them to find their own projects.

One thing I knew, though, was that this had to be a 180-turn for me from 40-plus years of journalism’s traditional dispassionate objectivity. The result, Of Course You Can Have Ice Cream for Breakfast! A Journalist’s Uncommon Memoir, is about as passionate and subjective as you can get.

With no narrative formula in mind, I just began jotting down ideas. I volunteered in January 2010 to house-sit a friend’s cat and her two blind and deaf cocker spaniels in New Harbor, Maine. 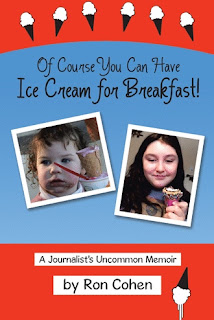 I arose early each morning, checked “the list,” chose a topic, and did not stop until late at night when the chapter was “done.” Repeat next morning, and the next. In 30 days I wrote 30 chapters.

Of course, quite a few did not make the final cut, replaced by other, better “memories,” and none of the rest survived in original form. Each chapter went through perhaps 50 rewrites, major and minor, before publication.

A: You know how grandparents spoil grandkids rotten, then return responsibility at day’s end to the hapless parents? Well, that’s me. Someone once said, “If I had known grandkids were so great, I’d have skipped having my own kids and gone right to the fun part.”

Why the title? I thought it would be catchy, a feeling confirmed by many people I consulted during the process. If you don’t capture a potential reader with the title and cover, you have blown your chance.

I suppose I could have employed some other favorite comestible, like “Cold Linguine and Clams” —but c’mon, is there anything cuter than a kid diving into a bowl of ice cream?

Q: Did you need to go back and research any of the stories you recount in the book, or did you remember most of it?

A: Very little research. I found once I got started that my long-term memory was astonishingly good. I did solicit help and confirmation on a few things from friends and family members. 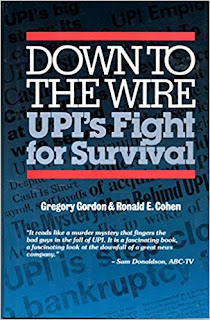 But one great thing about a project like this is that it is “My Memoir” — and my memories! And when you have ascended, by staying above ground and breathing, would you like to be the "young’un" challenging the memory of the “Godfather?”

Q: What’s been the reaction to the book so far?

A: I have been delighted. I have 35 five-star reviews (out of 35) on Amazon already, and most people who have read it are more than enthusiastic in their praise.

I particularly like that they “get it.” I set out to tell stories sweetly nostalgic, a bit humorous and a little self-deprecating. I wanted my enthusiasm for life and my love of family to shine through, and, universally, that's exactly what many readers cite as their take-away.

A: Every day I think of a new anecdote I wish I had included. I don’t plan an “Ice Cream, Part Deux” — but, luckily, my publisher has provided a wonderful, interactive web site where I can post anything that strikes my fancy, both words and pictures, and readers can talk back to the author. To access it, go to roncohenmemoir.com.

A: Yes, one thing. Today’s headlines are fraught with danger and despair, terrorists threatening and delivering, frighteningly inept and incompetent national leaders, a too-large chunk of humanity worrying about day-to-day survival and what kind of world awaits their kids and grandkids.

Permit me to suggest, risking immodesty, that Of Course You Can Have Ice Cream for Breakfast! A Journalist’s Uncommon Memoir offers a “feel good” antidote to modern-day's depressing reality.