Claudia Kalb is the author of the new book Andy Warhol Was a Hoarder: Inside the Minds of History's Great Personalities. She was a senior writer for Newsweek for many years, and her work has also appeared in Smithsonian and Scientific American. She lives in Alexandria, Virginia.

Monroe was a natural opener. She continues to captivate people more than 50 years after her death. She was Hollywood’s glamour girl. She had the look, the lure — that mysterious quality that draws people in. She also appears briefly in later chapters, so it also made logical sense to place her first.

People who knew her well talked about her innocence. She talked about the burden of fame. Her life was a struggle — and often a very painful one — from start to finish. 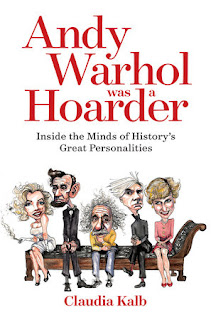 Warhol surprised me in so many ways. I had no idea that he was such a rabid collector of low-end and high-end items — from five-and-dime junk to artwork by Rauschenberg and Lichtenstein.

A: I was particularly drawn to Charles Darwin, who struggled with headaches, stomachaches, dizziness and more while writing On the Origin of Species. I sympathized with his struggles — including the difficult task of writing — and I admired his ethical character.

I struggled most with liking Frank Lloyd Wright’s narcissistic traits — his overwhelming sense of entitlement and superiority. I have huge admiration for his aesthetic vision and architectural creations, but not the way he treated other people.

In certain cases, the individuals spoke openly about their own diagnoses — Betty Ford and addiction; Princess Diana and bulimia nervosa. In others, including both Einstein and Darwin, I intentionally left room for questions. Even with wonderful advances in science, the brain is still a mystery in so many ways.

--Interview with Deborah Kalb. Claudia Kalb is my cousin!
Posted by Deborah Kalb at 6:58 AM