Margaret Sands Orchowski is the author of the new book The Law That Changed the Face of America: The Immigration and Nationality Act of 1965. She also has written Immigration and the American Dream: Battling the Political Hype and Hysteria. She is the congressional correspondent for the Hispanic Outlook on Higher Education magazine, and has worked for the Associated Press and Congressional Quarterly, among other news organizations. She is based in Washington, D.C.

Q: Why did you decide to write a book focused on the 1965 immigration law?

It was a perfect melding of my background and interest. I was interested in how we managed immigration over our history. Immigration is about work—why is it in the Judiciary Committee? I got curious about how our laws evolved. The 1965 act affected my family; I was married to an immigrant.

I’m a lifetime Democrat, and a big fan of the Kennedys. I knew this law was [JFK’s] legacy. It’s so maligned now, this law—it’s the most liberal, generous immigration law. I’m going, Why are, particularly Democrats, demanding it be fixed? Along with this to be the 50th year, it was the perfect time to delve into it.

Q: And what do you see as the legacy and impact of the 1965 law today?

A: There were tons of unintended consequences. To understand that, you have to understand the intent. That’s why I go back to the [1920s-era immigration] law. Why do immigrants come? There are different drivers…a lot of the drivers of the 1920s were similar to what’s going on now. We reflect the 1920s more than the 1960s.

The biggest rush of immigrants came between 1880 and 1920. In Europe, there was revolution, war, famine. It’s still the biggest surge of immigration in our history. 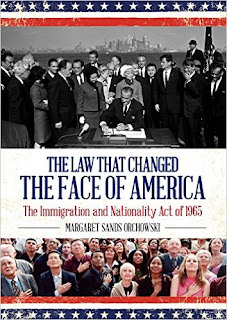 Especially, they came from Southern Italy, Sicily; they brought in the Mafia. Then from Eastern Europe [came] “Fiddler on the Roof” Jews--Jews being purged. The Northern Catholics and Irish Catholics didn’t like the Southern Italians.

They were crowding into cities like Chicago and New York, working in hideous conditions. The Progressive Movement got started then. There was huge income inequality. There was a huge Communist movement. We had a threat from abroad that people were very worried about—Communism. We were war-fatigued; we had gone through World War I.

You can see why [in the 1920s] American felt our borders were out of control. [The immigration law passed at the time] stated a preference for Northern Europeans. There were no restrictions on immigrants from Northern Europe or Mexico. Mexico was not considered a problem. But everybody else had very strict quotas based on their nationality.

[Restrictions on] Southern Catholics and Jews—this went on to 1964, so all through [World War II] there were incredible restrictions. 1965 comes, we’re reluctant leaders of the world, we have an economic boom, we didn’t have much immigration, and we have a ton of guilt.

In 1947, he was head of the Judiciary Committee, and he was able to get jurisdiction [over immigration] changed from the Labor Committee. He had control over immigration reform. There was a huge attitude change. Exodus had been published. Israel was popular.

The other thing was the civil rights movement. Black soldiers were coming back, and there were Jim Crow laws.

[The 1960s immigration law developed] a rule that still exists today, called the 7 percent rule. We will take all applicants and sort them out. No nationality can have more than 7 percent of all green cards given out in one year. People complain Mexico is bigger. So is China. But they are trying [to] be fair. Everybody had a quota of 7 percent.

They decided to do away with preferences for work skills, and have preferences for family reunification. That’s pretty unique to immigration law—they gave green cards to extended family members. 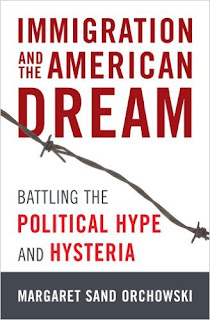 These things still exist. Do we really need that now? We have Skype. People ask, Do we need this? Maybe base it on work skills? The national origin thing is questionable too in our global world. A lot of high-tech people are mainly from Asian countries. Only 7 percent can stay?...

Q: What do you see ahead for the debate on U.S. immigration policy, especially given the issue’s prominence in the 2016 presidential race?

A: There were three big unintended consequences. First, a rise in legal immigrants. We invented a plethora of temporary visas [affecting] 2 million people a year. There are over three million basically legal [including green-card holders] a year. Two million are temporary. There are all kinds—students, H1Bs…There’s absolutely no enforcement. That’s one problem, and yet they are bringing in skills we need.

The second thing is a rise in illegal immigration. Number one is Mexicans. They’re used to coming in. They are on huge waiting lists. They said, Oh, heck with it.

The agreed-upon number is 11 million illegal immigrants. No one really knows. There’s nothing in our laws to stop it. [The U.S.] gave amnesty in 1986 to over 1 million. It turned out to be 3 million. It encouraged more to come in.

1986 was the first time they made a law that said it was illegal for an employer to hire someone who doesn’t have a green card. They were going to try to stop illegal immigration from then on. It was only a misdemeanor, and it couldn’t work.

Now we come to today. The Latino community is against temporary visas…they want amnesty, and want temporary visas to go away, [saying] it makes us second-class citizens. There are a lot of people attached to the fact that we have a large number of illegal immigrants and flexibility on temporary immigrants. The biggest abusers are universities…

Everything is in transition right now. In the meantime, we’re having drivers very similar to the 1920s. The mood of a larger percentage of the public, the people Trump is touching, is for more border control. I disagree with the rhetoric that says it’s anti-immigrant.

The Democrats are getting a lot of leverage out of calling it anti-immigrant. There are a number of proposals from the Republican side that would upgrade some of the temporary visas, and make it easier to adjust to green cards, and many Democrats agree. There’s even a Republican proposal to legalize Dreamers.

They want to increase sanctions against employers who hire illegal immigrants—E-Verify. Right now it is voluntary. There are Democrats who agree with that.

The problem is that Democratic politics are saying they like the pieces but want a comprehensive bill—but that would include legalizing people who are here, and that is a line [Republicans won’t cross].

There’s a real war between the comprehensive and the piecemeal. [Recently] the new speaker said he was not going to consider a comprehensive bill but will consider piecemeal bills. Unfortunately, Obama passed executive orders [relating to immigration]. I don’t understand why he did that, [perhaps] just anger at losing the 2014 elections.

The thing has become so politicized. I see many places where members of both parties agree. The Democrats are afraid if they pass some pieces, they won’t get back to others. But I think that’s not true.

One other unintended consequence of the 1965 act, the third, is because the act was passed in the fervor of civil rights…the politics that have followed it made immigration take on the tenor of civil rights.

I used to see Ted Kennedy saying immigration was the next big civil rights issue. Immigration is not a civil right. There’s a real paradox. You have the human right to leave a country [but] nobody has a right to just go into any country because they want to—stay, work, and become a citizen. It is the sole right of the sovereign nation-state.

[I was on a panel about the European refugee crisis]—all those refugees breaking down border fences, it’s an invasion in every way. They don’t really have the right to do that—but it’s a hard concept, especially for liberals.

A way we can deal philosophically with nation-states deciding—think of popular countries like ours as very popular public colleges.

There are thousands of people who want to go, and their lives will be changed, but colleges simply can’t take them all, so they have admissions policies, and those policies change over time.

The applicants get to apply. The college chooses. If a prospective student doesn’t get in, they can’t stay in the dorms and get degrees. There are other alternatives; they can go to other colleges.

Like the migrants in Europe—they can go to other countries but they all want to go to Germany. It’s really hard, but it’s the only fair way to look at this.

Most countries now realize how important immigrants are. In certain controlled numbers, it is really good for a country. The other role immigration law also has is to protect the people you already have, especially working people.

What’s not to love about a first-generation immigrant? [But] you can’t undercut [those already here]. There are two roles, and there’s an interesting tension you see….I find it fascinating…