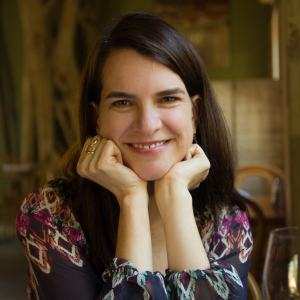 K.K. Goldberg is the author of the new book The Doctor and the Stork: A Memoir of Modern Medical Babymaking. Her work has appeared in a variety of publications, including The New York Times and the Gettysburg Review. She lives in Berkeley, California.

Q: Why did you decide to write this book, and did you make the decision to write it while you were pregnant, or once the twins were born?

A: There’s so little written for women pregnant with twins, after infertility or otherwise—and there’s a particular absence of stories from a mother’s first-person perspective. I hoped that a memoir, rather than something strictly factual or advice-oriented, would amuse, comfort and distract women going through these experiences.

I rigorously recorded my thoughts throughout IVF and the high-risk pregnancy, but didn’t start shaping the book until afterward. When my twins were babies, I was awake at odd hours anyway, the pregnancy still fresh in my mind. It seemed important to speak about how extreme and challenging it had been—and also to try to capture some of the beauty and humor.

Q: Can you say more about how you remembered all the details you include in the book?

A: As a means of venting difficult feelings through IVF and the resulting twin pregnancy, I kept detailed journals. These became basis of The Doctor and the Stork—I even preserved the week-by-week format, since that’s how I kept time while gestating. 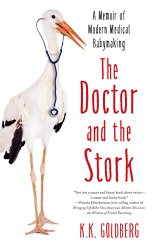 Without those notes, the minutiae of what I ate and wore, of what people said and how I reacted, surely would have been lost to the fog. There’s a good reason there’s not much written about twin pregnancy—the mind tends to wipe itself clean. I like to capture things in things in writing for precisely this reason.

Q: What are some of the most common perceptions and misperceptions about being pregnant with twins?

A: In my experience, the most common misperception about twin pregnancy is that it’s a heftier version of carrying a single baby. It’s radically different. That’s one reason why parents of multiples form clubs and support groups. Doctors will of course mention greater “discomfort” for expectant mothers of multiples, but at least in my case, this term became a profound understatement.

There are also numerous complications that can arise with twins—I knew this intellectually, but I hadn’t fully grasped the emotional impact until in the thick of it. For example, with twins there’s a constant risk of catastrophic prematurity, and then constant medical monitoring in attempt to prevent it. The fear and worry can be intense.

Q: What do your family members think of the book, and what do you think your sons will think of it when they're old enough to read it?

A: For the most part my family has been supportive. Certainly some members recall events differently—and I try to tackle this exact dynamic in the book itself.

I don’t expect my parents and siblings to cherish the fact that I write memoir. I’m grateful they accept it. I believe that cycles of conflict and coming together are more the norm for families than the exception, and a huge life transition like pregnancy—and in my case twin pregnancy—brings these relationships center stage.

As for my sons, I think by the time they are old enough to have interest in their mother’s pregnancy memoir, their reaction will probably be, Wow, she had more marbles back then! I hope they see how much they were wanted.

A: I’m writing essays for the Huffington Post Parents and other parenting venues about infertility, its treatments, and all things related to twins. I’m looking forward to doing another book, perhaps venturing into fiction. I’d like to write “a mother’s guide to napping,” after completing extensive personal research.

A: Since the publication of The Doctor and the Stork, I’ve been immensely touched by the responses I’ve gotten from people who have either had twins, endured infertility, or both.

I barely discussed IVF with anyone while going through it, and now I share it with everyone. As a result people continuously share with me their own fertility travails. I’m honored and humbled to receive these stories, and hope that in the end, we all can be less alone.