Marissa Moss is the author of the new children's picture book The Eye That Never Sleeps: How Detective Pinkerton Saved President Lincoln. Her many other books include Barbed Wire Baseball and Nurse, Soldier, Spy. She lives in Berkeley, California.

Q: You write that your great-uncle, a Pinkerton detective, was the inspiration for your new book. How did the book take shape, and why did you focus on Pinkerton's effort to save Lincoln's life in 1860?

A: I wanted to restore Pinkerton's reputation. Now when you say Pinkerton, people think of the violent strikebreakers, the agency that sided with industry over workers.

But that wasn't Allan Pinkerton; that was his sons later, after his death. Pinkerton himself started out as a workers' advocate in Scotland and had to flee the country when the Crown considered his activities subversive. 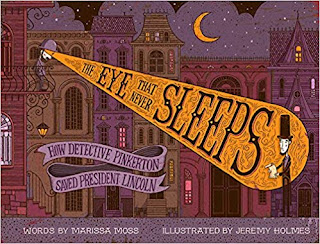 A: I started by reading Pinkerton's own writing. He invented a kind of detective story genre by describing his cases in several books. Once I stumbled on his story about the planned assassination attempt, I knew that was the one I wanted to tell.

I read other contemporary descriptions of the case, fascinating to see since there were friends of Lincoln who wanted to tar Pinkerton, to lessen his influence. Politics is politics, even in the 1800s.

Reading Pinkerton himself, I was charmed by his description of working hard to be fair, to not pre-judge any suspects. 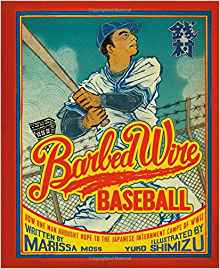 Q: What do you think Jeremy Holmes's illustrations add to the book?

A: I love them! The graphic format fits well with the detective feel of the story.

A: I'm hoping kids will find history as fun and interesting as I do -- that these are fascinating stories that are actually true! 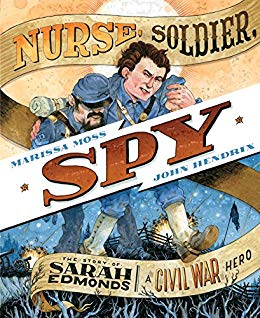 A: I'm working on a book about a woman physicist who should have won the Nobel prize but didn't (instead her male partner did, though he shared the prize money with her in acknowledgment of her contribution).

A: Pinkerton is a good example where the common perception of him (strikebreaker, anti-working class) is entirely unfounded once you know the actual history.

We need history to be better taught, so kids see it as interesting stories rather than a boring list of names and dates. I look for those stories that aren't well-known, but should be.

--Interview with Deborah Kalb. Here's a previous Q&A with Marissa Moss.
Posted by Deborah Kalb at 7:16 AM