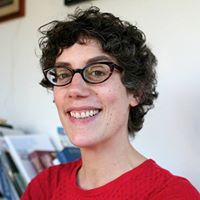 Deborah Fajerman is the author and illustrator of the new children's picture book How to Be a Supercow!. Her other books include How to Speak Moo! and Monkey Moo!. She is based in London.

Q: How did you come up with the idea for How to Be a Supercow!?

A: The story was definitely inspired by my own family life! I didn't set out to write a book about bedtime because that is a well-trodden path, so I should probably have steered clear of it, but it just popped up in my head with a life of its own.

Any parent or carer will know how obsessed you get with trying to get the children to go to sleep. It's not just that they need their sleep, but you also need to go and clear up the kitchen or even spend some quality time on Facebook. 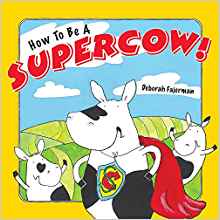 But why cows? There may be a reason for my love of cows but it's extremely well buried in my unconscious. So I have absolutely no idea why cows.

Q: Did you work on the text or illustrations first, or both simultaneously?

A: I usually have a sort of picture in my head and some interesting words, like rhymes or a misspelling of something. I like writing rhyming text but if you're not careful it can take over from the story. It's a bit like cracking a seriously tough crossword clue.

When I find the right rhyme for the story I do a dance around the kitchen. Then usually I realise the next day that it's no good and start again. I also draw thumbnails and sketches and write some more, then when I start drawing the spreads it sometimes changes the story.

Q: What do you think kids will take away from this tale of cow superheroes? 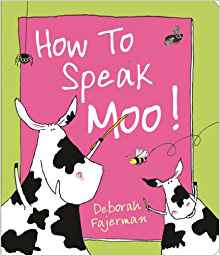 A: Well, I'm not trying to tell children that bedtime is a good thing because as they all know, bedtime is a cruel and repressive institution designed to stop them having any fun.

But on the other hand I'm hoping that the feisty female stars of the book having silly adventures will stick in their subconscious somewhere. Maybe mums and dads will feel good about the ending too.

There is a thing about brushing your teeth, if that rubs off on someone somewhere I'd feel proud. Maybe it will even rub off on my own children one day.

Q: Who are some of your favourite picture book authors? 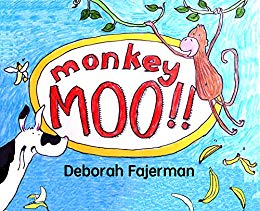 A: Some of my favourites growing up were American such as Sendak and Richard Scarry, and books like the Berenstain bears. In the UK Shirley Hughes had a warmth and humanity that is like a hug for a reader. Raymond Briggs' Father Christmas books, and other graphic novel/comic style books like Tintin and Asterix and Obelix.

I read a lot of comics including the British comic the Beano, and American strips like Peanuts and Caspar the Friendly Ghost. I used to read regular books alongside comics and graphic novels. I hate that thing where people tell children to stop reading stories with pictures because they are too old for them. Bah.

A: I’ve been re-working an idea for about a year now. I think I'm getting somewhere. It's just an idea though so I can't really go on about it yet. I'm writing some ideas for more supercow books of course, so we'll see if anything happens with those. Like most authors I work full time (nearly) so creating new material is a slow process.

A: I'd quite like the name of a good shrink who can tell me why I've got a cow thing. Also some suggestions for getting my children to brush their teeth.