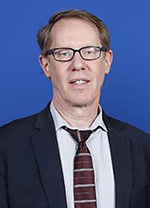 Chris Rasmussen is the author of the new book Carnival in the Countryside: The History of the Iowa State Fair. He is a professor of history at Fairleigh Dickinson University, and he lives in Highland Park, New Jersey.

Q: You write, “More than a century and a half after its founding, the Iowa State Fair is Iowa’s central institution, event, and symbol.” How did the fair end up being so important to Iowa’s identity, and why did you decide to write about it?
A: Even though most Iowans, like most Americans, are no longer farmers, agriculture remains central to Iowa’s economy and culture. The fair has always offered a celebration of agricultural bounty, and remains an icon of Iowa’s productivity.

I chose to write about the Iowa State Fair for a combination of personal and intellectual reasons. I grew up in Iowa and went to the fair several times as a kid, so I had fond memories of it.

But I confess that, when I began researching the fair’s history, I honestly had no idea how interesting it would prove to be, or that I would write a book on it.

As a historian, it seemed to me that the Midwest has received less attention than New England, the South, or the West, and I wanted to help redress the neglect of Midwestern history.

I was also interested in the histories of both agriculture and entertainment—an unlikely combination—and writing about the fair permitted me to write about both of these topics, and to relate them to one another. 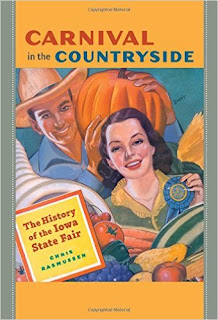 Q: What role did fairs play in the Midwest in the 19th century, and in what ways has that changed or remained the same? What do you see looking ahead?

A: American agricultural fairs were created principally to teach farmers how to be more successful and more scientific. But fairs have always mingled their “serious” purposes with fun.

These divergent sides of the fair sometimes generated tension. The fair was an important annual event, and was considered a microcosm of the state, so Iowans took it seriously, in the sense that they cared deeply about what events were included in the fair or excluded from it.

Some Iowans insisted that the fair ought to be a sober scientific exhibition. Others thought it ought to offer an annual vacation for hard-working people.

Today I think that the fair seems reassuringly familiar. Iowans attend the fair because they have a long history of doing so.

The Iowa State Fair remains extraordinarily popular. More than one million people attended it in 2015. The fair remains a beloved event and institution.

Iowans no longer need the fair to educate farmers—Iowa State University, agricultural periodicals, and the internet can disseminate information. And entertainment is now easily available even to farm families.

Still, the fair resembles an annual homecoming celebration for Iowans. There is simply no other event or institution in the state that embodies Iowa’s history and culture like the fair does.

Perhaps the virtual world of the internet will gradually erode the popularity of the fair, but I am optimistic that the fair’s popularity will endure. After all, it has endured throughout more than a century and a half of almost unimaginable economic, political, and social change.

A: The men who ran the fair wrote many letters, press releases, and annual reports, and the fair was covered extensively in the press. I spent an entire year in Iowa conducting this research.

When I began working on this book, I knew little about the fair’s history, so many things surprised me! I recall being amused by the range of the fair’s entertainments, from small sideshows to enormous grandstand spectacles. Freak shows. Burlesque. Daredevils. Staged train wrecks. Disaster spectacles.

The show business in the late 19th and early 20th century, which depended on live performers, was very different from today’s popular culture.

The fair also included other exhibits that were news to me. It offered a wildly popular “scientific” baby judging contest in the early 20th century, and was the place where Iowa artist Grant Wood, who painted “American Gothic,” first attained fame. And, of course, the novel and movie “State Fair” were set in Iowa.

Q: You write, “The growth of show business did not end the debate over the relative place of agriculture and entertainment at the fair.” How did that debate play out over the decades you studied?

A: The commercial show business became a big business in the late 19th century, but commercial entertainments were not entirely welcomed with open arms. Amusements provoked controversy across America, from big cities to rural areas.

Many Americans worried that movies, dance halls, vaudeville shows, and carnivals were tawdry, and were corrupting Americans’ morals and undermining their work ethic.

These fears were sometimes pronounced among Iowans, who fretted that entertainments embodied the values and behaviors of urban America, and posed a threat to Iowa’s largely rural, agricultural society.

America became much more urbanized and industrialized in the late 19th and early 20th century, and Iowans responded to these changes in American society by debating what sort of exhibits and entertainments ought to be offered at the Iowa State Fair.

A: Currently I am finishing a book on coin-operated machines in the early 20th century.

Recently I have gotten very interested in the 1960s and 1970s, and I am at work on three articles about the counterculture: one on intellectuals’ response to it, another on the racial minorities, and another on countercultural magazines.

I have also been researching and writing about battles over race relations and school integration in New Jersey, where I now live and teach.

A: Honestly, I can’t think of a thing!