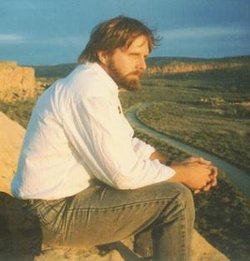 Kim MacQuarrie is the author of the new book Life and Death in the Andes: On the Trail of Bandits, Heroes, and Revolutionaries. His other books include The Last Days of the Incas and Where the Andes Meet the Amazon. In addition to his writing, he is a documentary filmmaker and anthropologist.
Q: You write, "I do credit [Edgar Rice] Burroughs with having created a vision that eventually took me to South America..." How did his writing influence you?
A: I read quite a lot as a boy growing up in Nevada and, even though my family didn’t travel extensively, I travelled a lot through reading—literally through time and to the moon. That’s the magic of books.
So I like to say that by the time I was 10, I’d spent quite a bit of time in Africa, had been to the moon and back, and visited all kinds of imaginary worlds, all because of reading. Some books, obviously, are better than others, and those that made the biggest impact I never forgot. In a way, I can still enter the scenes those pages created, even though that was a long time ago.
Edgar Rice Burroughs was one of a number of authors I really liked, back when I was 8 or 9, especially his “Hollow Earth” series, which was about a scientist who discovers that the Earth is hollow and a whole, exotic world, called Pellucidar, exists within. Pellucidar was inhabited by various half-naked tribes, dinosaurs, and of course, beautiful women.
It was only decades later, when I ended up living with a recently-contacted tribe in the Amazon jungle, that I realized what an impact those books had had—and that, perhaps if I never had read them, I never would have made it down to Peru and to the Upper Amazon.
Who knows? Motivation is such a mysterious thing. I have little doubt, however, that it was reading Burroughs and other authors as a child that made me want to visit different worlds—such as the Andes and the Amazon. 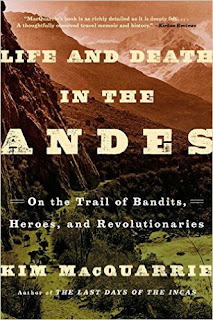 Q: Your book includes a variety of countries and people, from Charles Darwin to Pablo Escobar to Butch Cassidy. How did you pick the topics you focused on, and do you see any themes linking the various figures you write about?
A: Good question. Although the basic idea was to travel 4,300 miles down the Andes, from north to south, investigating especially interesting stories along the way, whittling those potential stories down so that they would fit into 9 or 10 chapters was not easy.
The whole region is so interesting that I could have repeated the journey over and over—and I don’t think I would have ever run out of new and interesting stories to explore.
In the end, I selected a mix of characters—some well-known, others less so—that I thought would collectively illuminate big swaths of South American history from different points in time and from different points of view.
The idea was that the chapters and stories would be interwoven, and that in the end they would form a kind of kaleidoscopic view of South America.
And, although the characters were as dissimilar from one another as Charles Darwin is from Pablo Escobar or Butch Cassidy is from Che Guevara, what they all had in common was encapsulated in a quote by T.E. Lawrence (“Lawrence of Arabia), that I put in the front matter of the book:
“All men dream, but not equally,” Lawrence wrote. “Those who dream by night in the dusty recesses of their minds, wake in the day to find that it was vanity: but the dreamers of the day are dangerous men, for they may act on their dreams with open eyes, to make them possible.”
The men and women featured in Life and Death in the Andes all share this feature in common: all of them dreamt with “open eyes” and—for better or worse—they all tried to convert their dreams into reality. 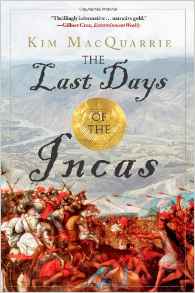 Q: You begin the book with Escobar. Why did you choose him as the subject of your first chapter?
A: Well, in Colombia he is a bit unavoidable, although the myths surrounding him have blown up even more since I began my voyage there, what with an extremely popular television series in Colombia (El Patron de Mal) and another in the U.S. (Narcos). Escobar’s legend has continued to grow.
What drew me to his story, however, was not so much Escobar but what he represented—the striving for wealth and power that is universal and that he clearly took to an extreme.
Escobar’s quest goes all of the way back to the first Spaniards in Colombia and their frenzied (and brutal) search for El Dorado—the mythical land of gold. Escobar is simply the most well-known and contemporary version of that quest.
But what also drew me to the Escobar story was a little-known aspect of it that I sought out. I’d heard that the police colonel who eventually tracked him down had been offered a $6 million bribe by Escobar—and had turned that down, knowing full well that in doing so he would probably be killed.
What kind of man did that? I wanted to know. So the quest to find the answer to that question forms the spine of chapter 1, and also launched my journey south.
Q: What do you think are some of the most common perceptions and misperceptions about the Andes?
A: I think one of the most common misperceptions about the Andes is the same that people have of South America and sometimes of all of Latin America: that there is little variation, that it is basically the same, culturally at least, from Mexico all of the way down to the southern tip of Tierra del Fuego. Obviously, nothing could be further than the truth. 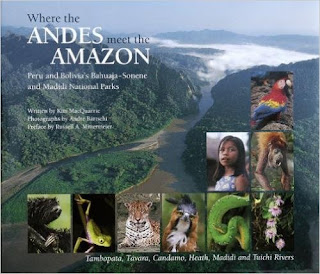 The other common misconception is that the Andes and South America are dangerous, very dangerous. Of course, my book does not help dispel that notion much as the book’s subtitle is "On the Trail of Bandits, Heroes, and Revolutionaries." So there are plenty of bandits and revolutionaries sprinkled throughout the book.
But I also investigated Charles Darwin, Thor “Kon Tiki” Heyerdahl, Hiram Bingham (the discoverer of Machu Picchu), the floating islands of Lake Titicaca, the last of the Yámana Indian tribe in Tierra del Fuego, etc. So it’s not all bandits and revolutionaries. It’s a mix.
The truth is that you have a better chance of being shot in Baltimore, Maryland than in Lima, Peru, and that most areas of the Andes are far safer than certain areas of Chicago, Detroit, and Los Angeles.
I’ve lived and traveled in South America for more than five years, and the worst that ever happened to me is that I was once pickpocketed on a crowded bus. By contrast, I’ve had my car broken into twice in the U.S., while living and working in Washington, D.C.
Q: What are you working on now?
A: I’m not just a writer but also a documentary filmmaker so I’ve just finished a short film while working with Richard Leakey, the paleo-anthropologist, in Kenya. That was a great experience and Kenya is a fascinating place.
Meanwhile, I’m letting my next book gestate—letting the well replenish, so to speak. Writing a book is a bit like running a marathon—it kind of seems to go on forever. When you stop, your whole body and mind need a rest. The well has to fill again. It’s at that moment that I switch to making a film, which uses a different set of skills. It’s like a complementary activity. I then switch back again.
Q: Anything else we should know?
A: Yes: Life and Death in the Andes is a hybrid of travel and history that takes place along the length of western South America. I was on a radio program recently and the host described it as a kind of “best hits of South America.” It’s the kind of book that, if you have any interest in South America and only have a short amount of time, then this is a book that will get you up to speed on some of the highlights of that continent.
In the end, whether you read it or not—if you haven’t been to South America, I highly recommend that you go there. It’s one of the most fascinating places in the world—historically, culturally, gastronomically, biologically—South America has got it all.
In the preface of my book, I quoted Pedro Cieza de León, a Spaniard who spent 11 years traveling through South America in the 16th century, along the Andes and through much of the recently conquered Inca Empire. In his dedication to the Spanish king, Cieza de León wrote:
O most serene and gracious Lord…to describe the wonderful things of this great kingdom…would require one who could write like [the Roman] Titus Livius, or Valerius, or some other of the great writers that have appeared in the world, and that even they would find some difficulty in the task. For who can enumerate the mighty things…the lofty mountains and profound valleys over which we went conquering and discovering? The numerous rivers of such size and depth? The variety of provinces, with so many different things in each? The tribes, with all their strange customs, rites and ceremonies? So many birds, animals, trees, fishes, all unknown?…
To which I added,
Cieza de León died having never visited all of South America. I can attest, however, having traveled the length and breadth of the continent and having visited much of the same territory that he did, that many of the miracles and marvels he described still exist, and that the wonders of South America—a world I once half imagined as a child and was later fortunate enough to experience--still remain.
--Interview with Deborah Kalb
Posted by Deborah Kalb at 6:25 AM