Q: How did you come up with the idea for the Romeyn family and why did you decide to set The Truth According to Us in the 1930s?

A: It’s funny how much cognitive dissonance this question creates for me.  Coming up with the idea for the Romeyn family?  The Romeyns, an idea?  As in, a construction? Made by me? This is a totally bizarre concept.

I was born into the Romeyn family.
To clarify—none of the Romeyns is a portrait of any member of my family; none of the events of the book ever occurred in real life (with the exception of the part where Willa gets run over by the bicycle); and not one of the things the Romeyns say is a quotation. 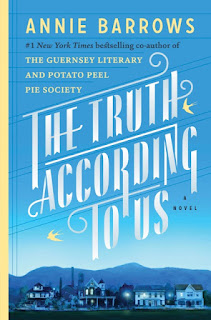 This is completely clear to all my relatives who’ve read the book, too.  My cousin refers to it as “this family history you’re calling a novel,” even though she had to admit there was not one single correlation to an actual person or event.

As for the setting in the 1930s, it was primarily dictated by the short and harried existence of the Federal Writers’ Project, which was necessary scaffolding for my plot.

The Writers’ Project was a Depression-era jobs program for writers and was, unsurprisingly, a target of conservative rage almost from the day it was founded in 1935 until its demise in 1941.

I picked 1938 for The Truth According to Us because it was one of the Project’s most productive years.  I suppose I could have found another mechanism, in another era, that would have worked just as well to precipitate my story, but the more I researched 1938, and especially 1938 small-town West Virginia, the more fascinated I became. 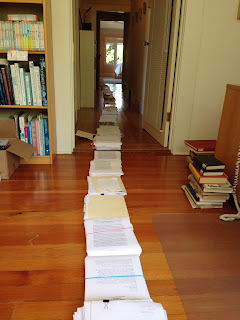 A: See attached picture of the drafts of this book, lined end-to-end across my house.  I made many, many changes as I went along.  I learned a great deal in writing this book, my first solo novel for adults, and the most important thing I learned was this: you can’t have everything you want.

As a reader, my perfect book is story without end: one thing after another after another until—well, until I expire. So I began by meandering after every character that interested me, organized generally by proximity instead of our narrative friend, chronology.

It was fun for me, but while I do still believe that character is plot, I came to see that the product is not a viable novelistic form.  Accordingly, I learned to impose the arc of drama (aka time) on my meandering. This is why it took me five and a half years. This is why my hair turned gray. Actually, to be honest, it didn’t. But it could have.

Q: Is Macedonia, West Virginia, a real town, and how did you research all the details in the book?

A: Macedonia is fictional, but it is based on several genuine towns in the eastern part of West Virginia, particularly Martinsburg and Romney.

I visited this area a lot as a kid, since the above-mentioned family is from that part of the world, but when it came to writing about the region, I found that my information was pretty dreamy and non-sequiturial, so I ended up doing a fair amount of hard research too.

I’m lucky enough to be able to use the University Library at UC Berkeley as my primary research venue, and I did a lot of my basic—and not-so-basic—work there.

I’d say the most helpful single resource about the era was LIFE magazine; I read every issue of 1938 and I think it gave me a viable sense of the preoccupations of the society as a whole.

My mom was the ultimate authority for regional speech—they really did say “poke” for sack—and for 1930s West Virginia foodstuffs, but I also found a lot of great regional information in local historical societies and through the West Virginia State Historical Society. Almost all the names in the book come from local cemeteries and yearbooks.

Serendipitously, the Federal Writers’ Project was called into the town of Romney in 1937 to produce a bicentennial town history that was exactly like the one I needed for Macedonia, and I purloined that booklet for tone and subject matter.

In addition, and probably excessively, I read loads of contemporary documents—restaurant menus, recipe booklets, textile manufacturing supply catalogues, the 1936 yearbook of yarn and thread producers, and advertisements for farming equipment. Ultimately, however, I’d say my best authority for contemporary products and prices was the 1937 Sears catalogue.

As you can tell, I love research.

Q: How would you compare Macedonia with the community you describe in The Guernsey Literary and Potato Peel Pie Society?

A: I would say that Guernsey during the Second World War was a considerably more afflicted place than West Virginia during the Depression, but the books are similar in that they are concerned with small-town dynamics.

Both books chronicle the doings of small communities where everyone knows something about everyone else, and where narratives constitute the chief interest of all our favorite inhabitants.

And it’s just barely possible that there might be some tiny similarities of character in the two books—I think Bird would really enjoy playing Dead Bride, for instance.

A: I’ll never tell. My lips are sealed. I am the most adamantine of vaults. My resolution is unshaken by your threats. My will is steely in the face of your tortures. I am obdurate, though you fling me to lions. It’s set in California.

--Interview with Deborah Kalb. For a previous Q&A with Annie Barrows, please click here.
Posted by Deborah Kalb at 8:58 AM