Barton Swaim is the author of the new book The Speechwriter: A Brief Education in Politics, which recounts his experiences working for then-Governor Mark Sanford of South Carolina. His work has appeared in The Wall Street Journal, The Times Literary Supplement, and The Weekly Standard, and he lives in Columbia, S.C.

Q: You write that your book “isn’t meant to be a ‘hit job’ or a ‘tell all’ about Sanford.” What were your motivations in writing the book?

Q: In the book, you write of your political work, “You get comfortable with insincerity. It affected all of us, not just the boss.” Why is that, and do you think your office was typical of other political offices in that regard?

A: Politicians are asked to comment on too many things. Some of them do it willingly, as though it's required; others are asked about their "view" or "position" or whatever, and they feel compelled to respond. I don't know why we expect them to constantly issue statements on everything -- even things they can't control and things we know they don't care about. 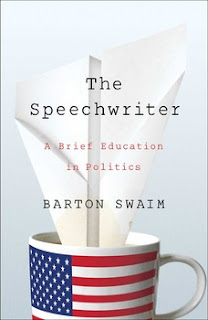 In any case, it encourages a kind of insincerity. Statements are made just because statements are necessary; "we have to go on record about this" is the thinking. You can only do that so often before you begin to feel a disconnect between words and intention, or between language and meaning.

Q: How would you describe your working relationship with Mark Sanford, and why did you choose not to name him in the book?

A: He's not chummy, or event friendly, toward his staff. Certainly he wasn't with me. I didn't like him as a person, and he had no regard for me except insofar as I could produce copy he liked. That was fine -- a lot of bosses work that way, and it frees you from taking his criticisms in a personal way. But of course it doesn't make your love your job.

I didn't name him because I wanted my book to be about more than one politician, or about one scandal. I wanted it to be about politics itself somehow -- a story that a lot of people, even people who can barely remember the whole Argentina thing [when Sanford went on a secret trip in 2009 to see his mistress], can relate to or find meaning in.

Q: South Carolina has been in the spotlight lately. As someone who worked in state politics and has lived in South Carolina for many years, what do you see looking ahead for the state?

A: It's controlled by the legislature, and the leadership has a lock on power in that state. They have no plans to give it up. The governor is not completely powerless, but he or she has much less authority than governors in other states.

The result is corruption in the legislature -- among both D's and R's -- and narcissistic, media-hungry governors. Nobody would want the job of governor in South Carolina except a politician with national ambitions. I don't see any of that changing.

Even so, things are changing. Something about the shooting in Charleston has begun something special there. I don't know what it is yet, but both whites and blacks -- and especially whites -- are admitting their past suspicions in a way I've never seen before.

Typically, though, very little of it has anything to do with our wretched politicians. If anything, they're getting in the way with their greed for media attention.

A: I'm writing a lot of reviews and essays and whatnot, and that helps to pay the bills, but I've got a few ideas for another book. I need this one to do well, though, so that my publisher will like the idea and want to pay for it!